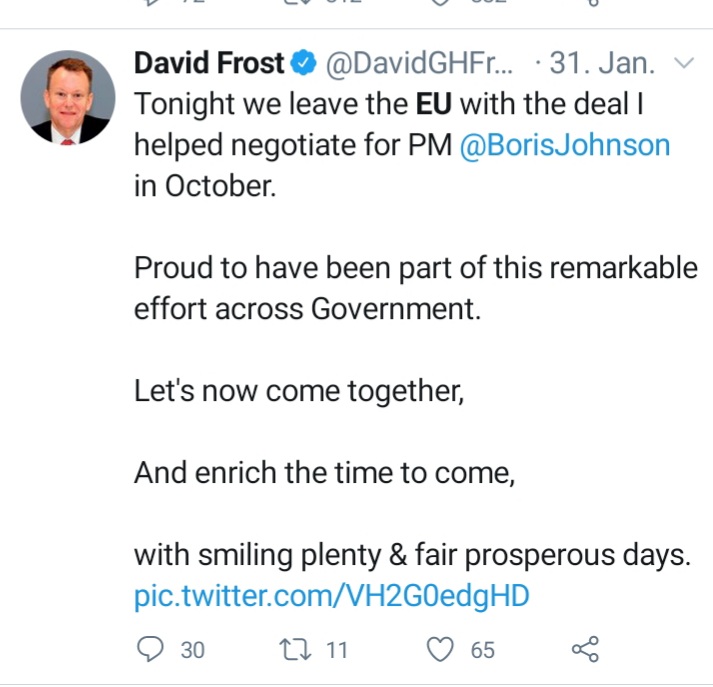 We trust it will provide years of satisfying service.
Here are some tips on getting the best from your purchase:
* Try not to talk out of it as you do with your original.
* It will prove useful for "taking it" sumultaneously form USA and Russia.
* We advise lubrication until it has settled into your preferred use pattern.
The educated differ from the uneducated as much as the living from the dead. Aristotle
Others?


Miliband should have walked away after he was battered when he was leader.. It shows how much labour have fallen to have to wheel this complete baffoon out to defend its position

When I watched Miliband in Parliament he was so over the stop I think either he thought he was on the stage or he had hit the bottle. Ridiculous performance.

-  Tue Sep 15, 2020 11:47 am #623370
Perhaps Johnson feels buoyed against the warnings of not being trusted on the international stage because of this trade deal secured with Japan? Which, if I remember rightly, has been in a recession for around 2 decades?
“Conservatism consists of exactly one proposition, to wit: there must be in-groups whom the law protects but does not bind, alongside out-groups whom the law binds but does not protect.” - Frank Wilhoit

-  Tue Sep 15, 2020 11:48 am #623371
I've come to the conclusion that this entire world cult of QAnon, alt-right, new right, Brexit, Putin-loving fuckwits are united by one central conceit: that the outside world is too noisy, and they want it to go away, and they don't give a fuck about anything but having their voice be the only one in the room.

It's Reactionary thought 101. Utterly unoriginal, but also in a curious new form. Nothing matters except daddy coming home to make the weird noises stop.
Others?

-  Tue Sep 15, 2020 12:16 pm #623378
No amount of cajolery, and no attempts at ethical or social seduction, can eradicate from my heart a deep burning hatred for the Tory Party. So far as I am concerned they are lower than vermin. Aneurin Bevan

To them, being strong is everything. And by being strong, they mean "not being weak". Now, what they define as weakness is where it gets interesting, and depressing. Weakness is admitting faults or failure, asking for help, cooperating with others, reaching out to help others with no expectation of reward, taking time to think about things, being polite, having a cold, having anything that puts them at a disadvantage (disability, illness, sexuality, skin colour etc), passing up the opportunity to kick others when they're down. Weakness is pathetic, effeminate, girly, swotty, gay.

Anything outside this narrow definition of strength is to be despised. An "I'm alright Jack, I do what the fuck I want and fuck you if you get in my way" attitude, applied to everything. Doesn't matter if everyone is calling you an asshole - they're weak because they have to band together to oppose you. People agreeing with you though - well, that's OK, they recognise a strong leader when they see one. Doesn't matter how you clobber people - fists, lawyers, friendly press - as long as no fucker gets in your way.

Some of you may remember a video from a few years ago, made in response to school shootings in the US. The presenters divided people up into sheep, sheepdogs, and wolves - the idea being that a sheepdog tries to protect weak people (the sheep), while the wolves (who they said we should aspire to be) simply took what they liked and fuck the rest. The challenge, they said, was to be a bigger and badder wolf than the one shooting up the school.

The author of the article summed up saying that for such people, "own the libs" has become their only real goal. Doesn't matter what's going on or how screwed you're getting, because you'll be kicking a lib's arse as you do so.

I fear that it was pretty spot on.
Boiler, mr angry manchester, Samanfur and 3 others liked this
"There ain't nothing you fear more than a bad headline, is there? You'd rather live in shit than let the world see you work a shovel."
Others?


The EU is watching all this with weary resignation. The Vatican must, by now, be discussing plans to canonize Michel Barnier. A Commission contact told me on Friday their current understanding is that the UK has decided on ‘no deal’, but doesn’t want to own it, so it is trying to force the EU to collapse the talks. So far, they are refusing to oblige. They are loath to reward Johnson for his appalling duplicity and give him what he yearns for: a pantomime villain.

But the outrage on Twitter and Facebook will be something to behold. Hell, there might even be petitions on change.org!
"I am not expendable, I'm not stupid and I'm not going outside."
(with apologies)
Others?

Why doesn't the same apply with the Japan deal?


I suspect they will once the job losses, testing shortages and food shortages kick in, and I suspect a lot of these covid small groups laws will be very rapidly used to try and prevent any sort of gathering.

Reply
Return to “The Government”
18 Jan