-  Sun Sep 16, 2012 7:40 pm #257979
Leaving aside questions about his business dealings, the use of pseudonyms and shaky evidence of uninvolvement once in the cabinet, it is looking a bit iffy for Grant, if I'm reading the entrails properly.

You may remember that at the back end of last year there were news reports that John Prescott had either used government credit cards inappropriately or had allowed that to happen. In the end it became clear that a government card had been cloned and used in a Las Vegas casino, amongst other things.

This was trumpeted in the Tory rags and blogs, and Shappo was pre-eminent. Prezza complained and Gus O'Donnell wrote to him stating that there gad been no jiggery pokery and he was in the clear. The letter, however, was subsequently altered, without O'Donnell's knowledge or permission, and GOD's signature was forged. Yes, that's right. The cabinet secretary wrote a letter to a peer and ex-deputy prime minister and somebody in government changed it and forged his signature.

Fast forward to several FOI requests about who altered the letter. Requests denied, Information Commissioner says the info must be revealed, No10 refuses. Seem familiar?

and then this appeared in the Graun:
http://www.guardian.co.uk/politics/2012 ... er-amended" onclick="window.open(this.href);return false;

So the clear implication is that the letter was altered and the signature forged by, or at the behest of, Shapps. He's Chairman of the Conservative Party. He has several clouds hanging over him (Google are very displeased with the products he sold on his now-disappeared website).

If that's true, it has to be man overboard, which is presumably why Shiny Dave is fighting so hard to be as untransparent as possible.

What a bunch of bastards.
Mene, mene tekel upharsin, Johnson.

-  Sun Sep 16, 2012 7:42 pm #257980
In other, probably unrelated, news the government whip Bill Wiggins has stood down, stating that he cannot explain his reasons for resigning.
Mene, mene tekel upharsin, Johnson.

In a separate development it emerged on Sunday that the website founded by Shapps which Labour called for an investigation into last week over allegations of copyright violation and fraud has been taken down from the internet.

Nice summation by Rowson - just as well put it here as any government minister thread... 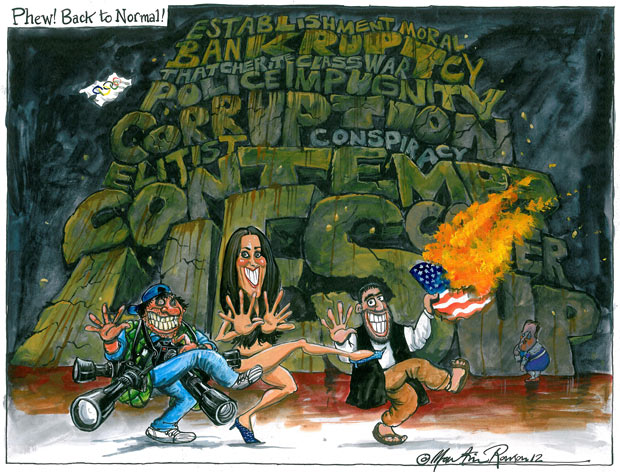 Surely they wouldn't have promoted him if they didn't think they could get away with it?

Surely that was dispelled anyway when he was able to point to the letter from O'Donnell?

I appreciate that "establishing a narrative" and all is important, but surely that wasn't worth the risk, was it?

smod wrote:Which site is down? I can still access TrafficPaymaster.

How To Corp according to the Guardy...


The Guardian first revealed that How To Corp's premier product – a $497 (£313) software package, TrafficPaymaster – created web pages by "spinning and scraping" content and sought to attract advertising, in contravention of Google's code of conduct.

In response Google said it would blacklist sites created by TrafficPaymaster.

Which pre-dates the reshuffle...


Google has strict rules on "unoriginal content". Its AdSense policy says: "Sometimes we come across sites that are using software to generate automated content. These sites might look like normal news sites, but the information is completely plagiarised. Scraping content and passing it off as one's own is not only wrong, but it also happens to be a serious violation of our policies."

Shapps, a rising Tory star who many say could end up as party chairman in the reshuffle, set up web sales business HowToCorp in 2005.


Mr Shapps said: “Prezza seems to have a cavalier attitude to the public purse, playing Russian roulette with taxpayers’ cash.

“We all know he liked to live the high life, but there is something fishy about the public footing the bill for him to go to an aquarium in Sydney.
“Unlike Labour, we are bringing in strong checks and balances to ensure this kind of wild spending can never happen again."


The Lib Dem, Sir Alan Beith, was credited in Hansard with asking a question in April relating to Prescott's use of procurement cards but it later transpired the question was asked by the Tory MP for Dover, Charlie Elphicke. A question asked by the Tory MP, Bob Stewart, was also amended to show it had been tabled by another Tory MP, Oliver Colvile, after Stewart denied making it. It is understood both Beith and Stewart complained to parliament officials. In a letter to Heywood, Prescott writes: "I am concerned about a number of procedures involving these PQs which are being investigated by the Vote Office." Prescott has also questioned how the Department for Communities and Local Government chose to publish its procurement card spending figures.

Would it have been possible for someone to change these? Bob Stewart and Oliver Colville are both newly elected ex-military men, so that could well be a simple mistake. But better to have on record an elder statesman Lib Dem asking the question than a newly elected rightwinger, like Elphicke.

-  Sun Sep 16, 2012 10:18 pm #258031
I really don't understand why Cameron was so keen to give Shapps the job as party chairman in the first place. He doesn't appear to be particularly intelligent so he's not going to out perform his rivals in political debates, he doesn't seem to have much in the way of charisma, he doesn't appear to have any kind of political clout to force any kind of change on the Tory party and he can't claim to have a vast amounts of government experience having only served in government for just over two years. So Cameron has taken a big risk on a political light weight who doesn't seem to bring anything to the table.
http://tiny.cc/tqugax