Addressing the annual DUP conference near Belfast today, Mr Dodds said the party had “never had more influence” in Westminster.

He said: “If I’m honest I did not believe that in 2017 we were heading for a hung parliament where the DUP would hold the balance of power.

“But looking back I don’t think it was an accident how things turned out.

“On reflection it’s hard to imagine how the results could have done more to maximise our influence.

“A few more seats for the Conservatives and they could have ploughed on alone. Had they won a fewer number of seats, even with our help they could not have secured a majority.”

And he said: “We entered the negotiations with the guiding star of doing what was right not for the DUP, but for Northern Ireland in particular and the United Kingdom as a whole.”

A DUP source told PoliticsHome the reference to it being no “accident” was an “allusion to guidance from a higher power so to speak”. https://www.politicshome.com/news/uk/co ... dup-become" onclick="window.open(this.href);return false;

Ordinarily, this volume of Union Jacks heralds the arrival either of Land of Hope and Glory or Nigel Farage


Is it clean? Probably not. Is it hard? Oh yes. Is it smooth? Unlikely. Soft? No. Sensible? Definitely not. Jobs first? No idea. But one thing cannot be in doubt: It is definitely red, white and blue.

The Lord hath spoken, and through choosing the DUP as his vehicle through which to assert influence on the Brexit process, we are able to ascertain a much clearer picture of God’s desired Brexit outcomes.

He has ruled out the possibility of Northern Ireland remaining in the customs union (and, through the medium of party leader Arlene Foster, written to the heads of the 27 EU members states to make that point clear). We know that He will not countenance any kind of border within the union of the United Kingdom and would appear alarmingly relaxed about the return of a hard border to the island of Ireland.

Arnold wrote:That's the God who doesn't like the EU or the GFA I take it. Serves them right for signing it on the day he died.

Read that as GAA.

-  Sun Nov 26, 2017 4:55 pm #526128
If you've not seen It, the film Trainspotting 2 features a scene in which our heroes tangle with a group of die hard unionists who none of which have progressed much since the battle of the Boyne. It's quite a funny scene. Then you realise it's not that made up.
"There ain't nothing you fear more than a bad headline, is there? You'd rather live in shit than let the world see you work a shovel."

Foster told Sinn Fein it was time they started “respecting the British flag, the Royal Family and the Armed Forces”.

They clapped like mad at that. But if a condition of a return to power sharing is Sinn Fein respecting the British armed forces, one suspects the current 10-month wait is scarcely the beginning.

-  Mon Nov 27, 2017 12:46 am #526169
Good bit of bluster there from Arlene, creating a false equivalence between the Shinners not becoming model Brits and her own party reneging on commitments around an Irish language act etc. Probably plays well to fucking idiots.

In other Loyalists be crazy news this week, a Loyalist think tank (yes, I know, a dearth of the former and proud desire for the latter) had submitted demands that the Xmas tree in Magherafelt be taken down, lest it offend muslims. This is seen as equivalent to the decision to reduce the flying of the Union Flag above council buildings to designated days only (that is to say, the same as occurs in GB). I am not making this up.


Our new survey sheds light on the views of the public. In September, we asked a representative sample of the Northern Ireland population to react to the statement that: ‘People should be prepared to accept border controls between Northern Ireland and Great Britain, if this is agreed in the Brexit negotiations between the Government and the EU’.

Overall, 49% agreed with this, and 39% disagreed (with 12% neither agreeing or disagreeing). But, perhaps surprisingly, willingness to accept such controls was stronger among Leave voters (64% agreed), supporters of unionist parties (59%) and Protestants (54%).

This probably reflects a willingness to live with east-west border controls as the price of a Brexit successfully negotiated by the British government. Lower levels of agreement from Remain voters (44%), nationalist supporters (47%) and Catholics (43%) imply, by contrast, reluctance to contemplate any kind of new border controls.

Answers to a second question are interesting, but harder to interpret. Respondents were asked about their reactions to the statement ‘After the UK leaves the EU, there should be free movement across the Irish border, as at present, but border controls between the island of Ireland and Great Britain’.

Overall, 64% agreed and 25% disagreed (with 11% undecided). But this time the relationship with certain critical groups was reversed. Support was strongest among supporters of nationalist parties (75%), Remain voters (73%) and Catholics (68%) – but it was also high among unionist supporters (56%), Leave voters (also 56%) and Protestants (60%). https://sluggerotoole.com/2017/11/26/ex ... -controls/" onclick="window.open(this.href);return false;

-  Mon Nov 27, 2017 8:27 am #526174
I think the entire political class might well be misjudging the public mood. As the economic impact of Brexit becomes more clear, which it is with each passing day, leave voters will come to realise that they are the ones who are going to suffer. We saw it in the Channel 4 news item from Grimsby a couple of weeks ago and with the Sunderland Nissan workers: vote leave but give us a special deal. Aint no deal as special as the one we already have. Perhaps the people of NI will be the first to wake up to this fact en masse as they are the ones who, most recently, saw the benefits of open borders and a more tolerant approach to others.

As the economic impact of Brexit becomes more clear, which it is with each passing day, leave voters will come to realise that they are the ones who are going to suffer. We saw it in the Channel 4 news item from Grimsby a couple of weeks ago and with the Sunderland Nissan workers: vote leave but give us a special deal. Aint no deal as special as the one we already have.

This is the sad irony that its the Leavers getting it in the neck. I read the ceramics association in Stoke are also looking for Brexit exemptions as they fear decimation from Chinese product dumping and export disaster. Down here in Remain land Cambridge things are more sounding chipper with all the talk of biotech cluster investments in R&D from around the world. And neither is it the end of the world for City bankers to fly off to Dubin and Frankfurt in the week.

The people of Taunton Deane, according to their MP, Rebecca Pow, have never had it better, thanks to Conservative policies. A combination of the higher minimum wage, the higher personal threshold for paying income tax and the frozen fuel duty meant people had “thousands more in their pockets”.

https://www.theguardian.com/commentisfr ... eas-budget" onclick="window.open(this.href);return false;
They fuck you up your mum and dad,
But not as much as Brexit will.

WTF? wrote:Perhaps the people of NI will be the first to wake up to this fact en masse as they are the ones who, most recently, saw the benefits of open borders and a more tolerant approach to others.

When a guy like Ian Paisley Jr advises his constituents to apply for Irish passports anything's possible. The DUP may well find that their constituents are not as keen on a hard Brexit as the Tories. 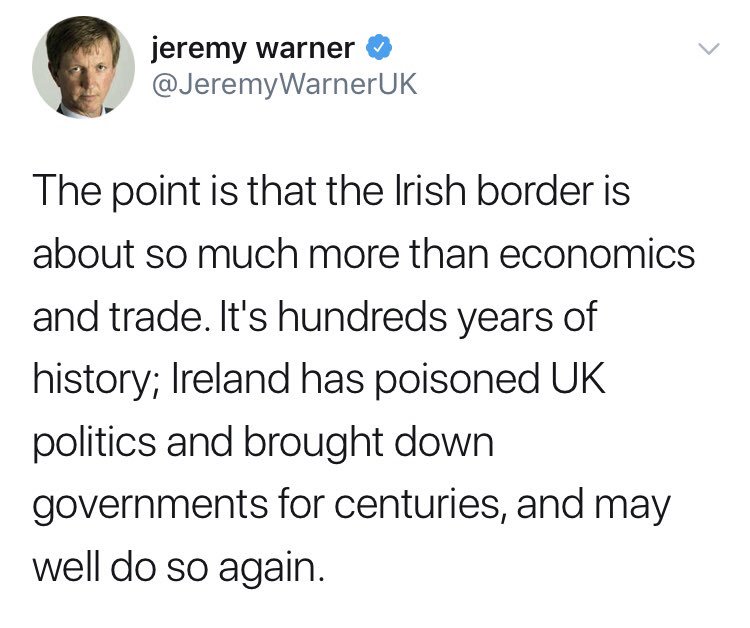 Reply
Return to “The Government”
27 Jan

Well Deedes in the Mail referred to it as his &quo[…]

Seemingly nobody has actually read the linked arti[…]