-  Thu Oct 29, 2020 9:11 pm #628279
He's got a meme too. It might be better if the figures on the meme added up to anything like the figure on there.
And better if the biggest number on there wasn't an obviously laughable thing to attribute to the mayor. I mean, what policy decision does he think Khan took that led to this? 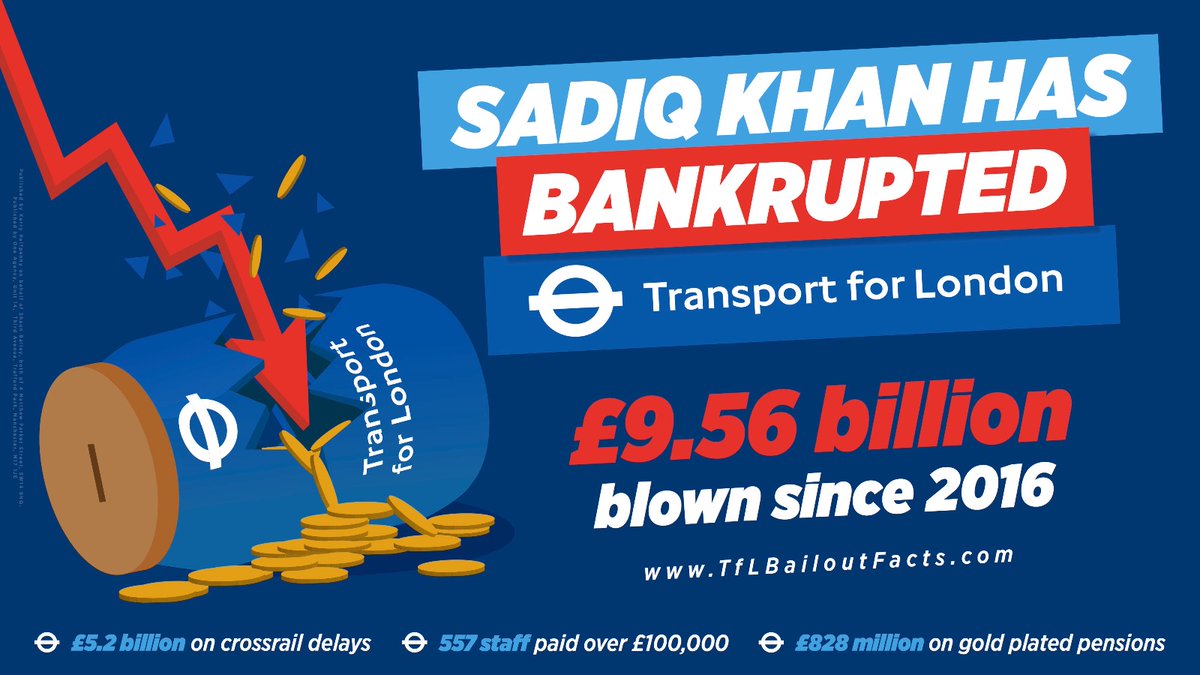 -  Thu Oct 29, 2020 9:14 pm #628280
If Shaun had two brain cells to rub together Shaun might consider how many TfL workers live in London and will be eligible to vote in the next London mayoral election. Shaun then might consider not pissing off all those potential voters by attacking their terms and conditions of service,and blatantly lying and being so obviously disingenuous about such things. But Shaun doesn't have two brain cells to rub together. Shaun is thick and stupid.

Don't be like Shaun.
Oblomov, Watchman, Catkins liked this
This age thinks better of a gilded fool / Than of a threadbare saint in Wisdom's school - Thomas Dekker c1598

Yep. If he wants to run on cutting this, that's his prerogative. He'll probably have to offer something else when he negotiates wages. Maybe actual cash, rather than space on trains/buses that are running anyway. And of course, we don't know that all these people will shell out for it anyway. You might well think "Travels not free anymore, I reckon I'll get a bike"

Notice anything odd about this trip to London beyond the City/Westminster.

You got it yet? Yep, Watford Station isn't in London. And it gets worse. He's misunderstood the "threat" to the station completely.

Despite what you might think from the name, Watford Station isn't particularly convenient or important- it's at the end of a spur to the Metropolitan Line tube. It's way quicker to get into Central London or anywhere north by using the much bigger and busier Watford Junction (rail) Station.

So a good plan was put together, called the Croxley Rail Link, which would restore a disused section of track and join Watford Junction with the Metropolitan Line. Two new stations would be built, and Watford Station would close, being on a useless spur.

Good project, I think, albeit hard to sell at times of austerity or when your political priority is supposed to be levelling up other regions. So it's not going ahead. That means Watford Station is safe! Even if you think Sadiq Khan has spunked all TfL's money, that's good as far as keeping Watford Station open. If you wanted to attack Khan, you'd stand by the disused line and say "This could be reopened if Khan blah blah".

Not that this would be at all honest. You clocked Watford isn't in London, so you might also have wondered why London was funding it. You wouldn't be the only one. Johnson committed it to it, but there wasn't a pot of money lying about with "Croxley Rail Link" on it, or much prospect of it. The Government and/or Hertfordshire would have to put in a big chunk. They haven't, so no rail link.

But at least Watford Station's safe.
Timbo liked this
Others?

-  Sun Nov 01, 2020 4:12 pm #628593
TfL and Grant Shapps have made a deal. Not surprisingly, it's way short of the ludicrous stuff Shapps proposed in his letter (extending the congestion charge to the North/South Circular). So the government have cluelessly made Khan look like a winner. How is Bailey taking it?

The costs of the Crossrail overrun are "wasteful spending" which Khan can apparently "cut".

Presumably these staff on over £100k are having their salaries cut to zero as well.

-  Sun Nov 01, 2020 6:19 pm #628604
Might be some political logic in it. Closing stuff is going to be a nuisance to someone. Probably a few Tory/swing voters coming in to Waterloo and missing it. It's a funny thing to complain about if you're worried about costs, but he's not going to win. It's just swinging wildly by this stage. As someone said, he's effectively the anti-devolution candidate by this stage, part of a wider group who are making as much noise as they can to distract from Central Government.

Can't vouch for the accuracy of this, but it looks fairly knowledgeable, if in need of a sub-editor.

This caught my eye. Not that watercoolers are impossible office luxuries, but they may not be "watercoolers" at all.


Money spent on water coolers is Bailey’s next gripe. According to him, TfL spent £5m on water coolers. Now that’s not exactly small change, however, the real story is a £5m fund was launched to help deliver hundreds of public water fountains across London. This is a joint initiative between Thames Water and the Mayor of London to encourage people to refill, rather than buy water and help reduce single-use plastic.

This surely a good idea, not just in terms of saving plastic but saving people money of going into places and paying for drinks when they're thirsty.
Timbo liked this

Money spent on water coolers is Bailey’s next gripe. According to him, TfL spent £5m on water coolers. Now that’s not exactly small change, however, the real story is a £5m fund was launched to help deliver hundreds of public water fountains across London. This is a joint initiative between Thames Water and the Mayor of London to encourage people to refill, rather than buy water and help reduce single-use plastic.

This surely a good idea, not just in terms of saving plastic but saving people money of going into places and paying for drinks when they're thirsty.

Ah yes, but think of the small businesses selling bottled water...
Tubby Isaacs liked this
"I am not expendable, I'm not stupid and I'm not going outside."
(with apologies)

Reply
Return to “The Government”
25 Jan

Terrible news Daley. Rest assured, you did all you[…]