Is this because he recalls somebody said about the Police cancelling all leave because of the Notting Hill Carnival? Or is it completely cynical, blah blah militant unions blah ruined my no deal.

Having leave cancelled is *really* going to boost morale and productivity, it's a thankless job already. Also is the Magic Money Tree going to pay for all the cancelled bookings or are the workers going to get doubly shafted?
Tubby Isaacs, Timbo liked this

Is this because he recalls somebody said about the Police cancelling all leave because of the Notting Hill Carnival? Or is it completely cynical, blah blah militant unions blah ruined my no deal.

Having leave cancelled is *really* going to boost morale and productivity, it's a thankless job already. Also is the Magic Money Tree going to pay for all the cancelled bookings or are the workers going to get doubly shafted?

The frightening part is that this will play well with his old, white, middle class electorate.
Mene, mene tekel upharsin, Johnson.

-  Mon Jul 01, 2019 9:04 pm #579628
Of course it will. They're into simplistic "solutions", particularly if it sounds like someone else will suffer for it. It's pretty much the essence of Tory.
Malcolm Armsteen, randomelement, Boiler and 2 others liked this
Ní uasal aon uasal ach sinne bheith íseal: Éirímis
Others?

We have two men contending to be the UK's new Prime Minister, and they are both trying to outdo each other by increasingly, and actively, advocating a course of action that overnight will throw Britain's economy into absolute chaos, cost thousands of people their livelihoods, and make life needlessly more difficult for most people in the UK. What they are proposing also threatens the continuing existence of the union of UK nations, and risks the return of terrorist activity in Northern Ireland by trashing the precious international treaty known as the Good Friday agreement.

By threatening an exit from the EU with "no deal", it is somewhat obvious that both Johnson and Hunt feel obliged to do so in order to impress the Conservative party membership that will decide which man will get the job. An electorate that, according to a recent notorious YouGov poll, is apparently prepared to see just about anything trashed, including their own political party, to see the UK end its EU membership.

But they're both lying. In theory, a "no deal" exit can take place by default if no intervention occurs by 31 October, but the reality is that there is sufficient opposition within parliament, including the Commons Speaker, to stop a "no deal" Brexit.

Both men are also lying about re-opening negotiations with the European Council and achieving an alternative withdrawal agreement to that already agreed by PM Theresa May, and furthermore, one that will secure passage through parliament. But negotiations are over. The EU has repeatedly emphasised this - there can be no other re-negotiated agreement.

It may even be the case that the likely accession of Boris Johnson will immediately trigger a motion of no confidence in the government which, because of the imminence of the putative "no deal" scenario, actually embodies a real possibility that the government could fall and an immediate general election ensue.

At that general election, incredibly, there is no prospect of the Labour Party winning a parliamentary majority. The best that we might realistically hope for is to be the largest party in another hung parliament, needing to enter into coalitions or agreements in order to govern.

Such an unappetising prospect is entirely due to the inept mismanagement of Labour's political strategy in opposition of its leader, Jeremy Corbyn. He has much to answer for, as the hopes of many for an end to the cruelty and destructiveness of the Tory government are embodied in the Labour Party, and failure to return the party to government condemns those people to more austerity, hardship, failing public services, and the continuing slow death of our precious National Health Service.

The whole business is, I'm afraid, profoundly disturbing, and profoundly depressing. It makes me deeply uneasy.
davidjay, Malcolm Armsteen, Boiler and 6 others liked this
"The opportunity to serve our country. That is all we ask." John Smith, Leader of the Labour Party, 10 May 1994.
Others?

0207-MATT-GALLERY-WEB-P1_trans_NvBQzQNjv4BqqVzuuqpFlyLIwiB6NTmJwfSVWeZ_vEN7c6bHu2jJnT8.jpeg (30.75 KiB) Viewed 3872 times
Timbo, Cyclist liked this
They fuck you up your mum and dad,
But not as much as Brexit will.

But then Labour wont be able to change its policy on Brexit. I sense the hand of Seumas.....

-  Wed Jul 03, 2019 9:50 am #579817
Instead of Hunt dolling out £9bn in Brexit benefits why make Leave voting fishermen walk the plank in a sea of hungry sharks? As for the Brexit farmers, they could get a job cutting sugar cane in Belize for Tate & Lyle, its what they voted for.

-  Wed Jul 03, 2019 9:53 am #579818
Hilarious Boris is going after "the Nanny State" today. The Minister who introduced the sugar tax isn't impressed, but the "get out of my life" goons show up BTL. Maybe some of them are Tories voting for "Boris"? Somebody sane suggests there could be some "big sugar" money involved.

I'm sure Steve Brine is sincere about this, but he might be seeing Lib Dems in his rear view mirror as MP for Winchester.
Arrowhead liked this 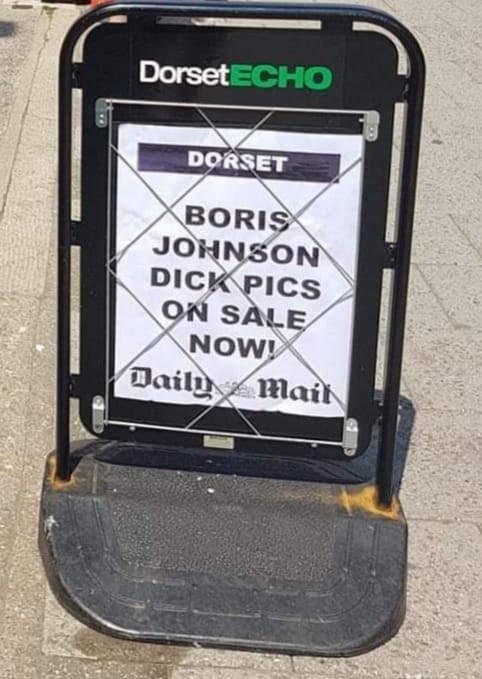