Labour MPs I'd like to hit with a haddock

-  Mon Jul 13, 2020 5:51 pm #617452
I warmed to Brian Sewell the more I saw of him and realised the rude plummy misanthrope was just a character. No one who knew him had a bad word about him personally despite attracting enemies with his acerbic comments. I came to realise he wasn’t a gobby ‘my 6 year old could do that’ populist when he railed against conceptual art. And trusted his judgement that Damian Hirst and Tracy Emin’s work was a load of bollocks. He was hilarious hearing the news that Britain voted Rolf Harris as their favourite artist. Sewell’s verdict was that he couldn’t paint for shit.
Last edited by youngian on Mon Jul 13, 2020 6:02 pm, edited 1 time in total.

Kreuzberger wrote: ↑
Mon Jul 13, 2020 11:44 am
He was brilliant when banging on about his rather unlikely passion for Speedway...

The same with Sewell’s book on his life long passion for dogs whom he preferred to live with than people. Loving and observant but never anthropomorphic or sentimental. Or tediously finger wagging about how you should train dogs.


Lloyd Russell-Moyle has stepped down from the Labour frontbench, saying he had been the victim of a “torrent of online hate” because of a “campaign by the rightwing media”.

The Brighton Kemptown and Peacehaven representative’s departure from the shadow cabinet is the latest exit of an ally of the former leader Jeremy Corbyn.

Sir Keir Starmer, who replaced Corbyn after the party’s general election defeat, thanked Russell-Moyle for his work as the shadow minister for air quality and the natural environment.

oboogie liked this
Don't give me the Star Trek crap. it's too early in the morning.


This has unleashed a torrent of online hate and daily calls of harassment to my office, which has exposed those who work for me to abuse that would not be acceptable in any workplace.

As reported elsewhere (emphasis mine)


Labour MP Lloyd Russell-Moyle has stepped down from his role as a shadow environment minister, blaming a "campaign by the right-wing media".

The Brighton Kemptown MP said this had "unleashed a torrent of online hate" and daily abusive calls to his staff.

He said he would need "a few weeks" to recover from stress and support his team.

Mr Russell-Moyle has recently apologised for comments he made about Harry Potter author JK Rowling.

The MP said he had informed Labour leader Sir Keir Starmer of his decision to quit his post after speaking to him on the phone on Thursday.

In a statement on Twitter, he said he said he had made the decision "with regret", adding media attacks had made it "untenable" for him to stay on.

"It is my job to get political flak, but it is not the job of caseworkers, researchers and assistants to be attacked," he added...


Rather than whining about receiving abuse and wanting to go and hide, his stepping down is to protect the staff, at least in part.

He might be an unpleasant tit but, assuming the staff go with the post rather than with the incumbent, if his staff are being subjected to abuse they have done nothing to 'deserve' then stepping down is the right thing to do.

Even total dickheads can do the right thing occasionally.
Samanfur, Arrowhead liked this
This age thinks better of a gilded fool / Than of a threadbare saint in Wisdom's school - Thomas Dekker c1598

What do these 6 have in Common? They voted for Johnson's WA. I'm sure they all knew the problems, but thought this a harmless signal to send to local Brexiters. How do they feel about that now?

-  Fri Sep 18, 2020 4:31 pm #623718
Two Corbynites here, talking bollocks about WASPI, following on from the pathetic swerve in this direction in the last election campaign. Somebody a while ago (was it Youngian of this parish?) noted that the Left used to go in for Europhobic bollocks populism because it knew that lots of its policies and outlook were unpopular with "the man in the street". I think this is what's happening with these two on this issue.

"Stolen" and "robbed" basically means "announced in 1993, 2007, 2011"- though the last of these was harsh, and there's definitely room for helping those most affected by that.

Luciana Berger to Paula Barker is just as much a downgrade as Ed Balls to Andrea Jenkyns.
Don't give me the Star Trek crap. it's too early in the morning.

Tubby Isaacs wrote: ↑
Wed Sep 23, 2020 4:04 pm
That'll bring the voters back, Lexiters (as I think she was) writing about dictatorships in the Morning Star. I mean, I can see why people want to say Cuba has achievements, but there are, you know, a few issues as well.

As with many other countries (Cuba, Iran, China, Palestine) you can get away with appalling breaches of human rights that would otherwise see you ostracised as long as you're deemed to be sufficiently anti-west.
Catkins, oboogie liked this
Others? 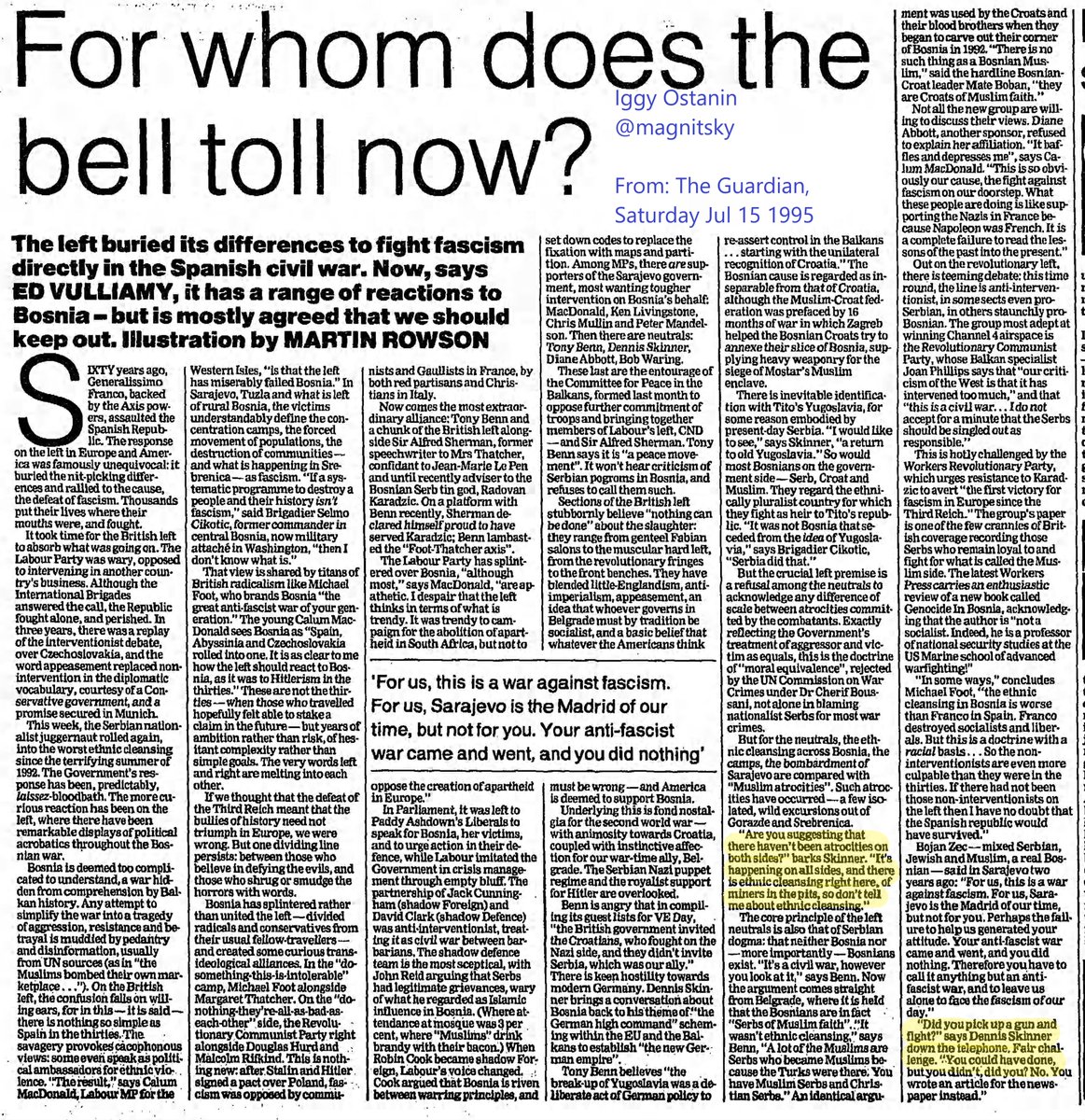 Nice but of dogwhistling as well then again Benn could be a reactionary when he wanted to be I remember reading one of his diaries and he has a rant about ITV and how it's terrible Britain has commercial television.
Don't give me the Star Trek crap. it's too early in the morning.

The Weeping Angel wrote: ↑
Fri Sep 25, 2020 3:15 pm
Nice but of dogwhistling as well then again Benn could be a reactionary when he wanted to be I remember reading one of his diaries and he has a rant about ITV and how it's terrible Britain has commercial television.

There was a terrific amount of snobbery about commercial television when it was introduced - just as before the war there was about listening to commercial radio from Luxembourg and Normandie. I wonder if that was his aversion - intellectual rather than philosophical?
"I am not expendable, I'm not stupid and I'm not going outside."
(with apologies)