-  Sun Dec 20, 2020 7:10 pm #633202
He's such an inspirational, wonderful politician and leader that he can't bear to leave a party that doesn't want him.
mattomac liked this
We've got democracy! Who needs solidarity?

I think the idea is to change the people.
We've got democracy! Who needs solidarity? 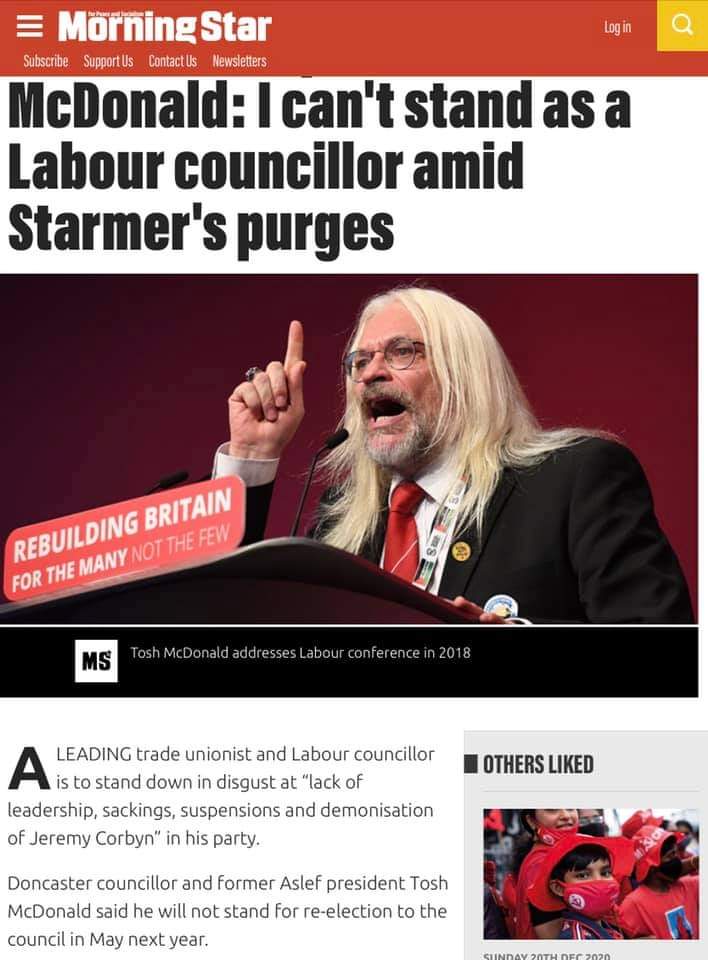 -  Wed Dec 23, 2020 7:43 pm #633525
Might that also be a response to Blair's suggestion of giving people just the one dose of the Pfizer/BioNTech vaccine as that alone has 91% efficacy, the extra four percentage points afforded by two doses being a bit of lily-gilding?

Considering I've heard anecdotal evidence of a thousand doses being lost due to faulty refrigeration at one medical centre?
"I am not expendable, I'm not stupid and I'm not going outside."
(with apologies)

-  Wed Dec 23, 2020 9:32 pm #633542
A lot of the Corbyn fans out in force saying any attack on his article by “centrist dads” (yep, still all they’ve got) is missing the point of valid criticism just to have a go at Corbyn, and it’s all part of the usual conspiracy theory and making it all about him because he’s such a danger etc. But the thing is, they’re missing the point - it’s not the message. It’s the messenger. In that sense it *is* all about him, but not in the way they think.

Big pharma isn’t perfect by a LONG way, and there’s a lot of legit criticism. The article Corbyn reposted covers some of those legit points. But the key point is I don’t trust it coming from *him*, because I believe he is the bad actor here. I don’t believe he would really like to engage in constructive reforms. I believe he just sees a profit-making industry that has some issues, and therefore wants to tear it all down in favour of a nationalised option as well as no doubt allowing more scope for “alternatives”. Because this is a deeply stupid man who believes in and has supported homeopathy, among other quackery. All his past actions point to this being the more likely course of action, and the staggering tone deafness and stupidity of appearing to attack the very organisations right when they are providing life-saving covid treatments, and we need the general population to trust the vaccines, just adds to that. He couldn’t bear to see corporations being perceived to be doing something good without making sure everyone knew their faults, so had to make sure we all knew his opinion on things. And he did so either ignorant of the potential collateral damage from loss of trust or happy for it to happen, as long as he was being seen to be “right on”.

Yet again, Jeremy Corbyn’s main and perhaps only point has been to clumsily attempt to remind us all how very, *very* worthy Jeremy Corbyn is.

Ain't gonna happen any time soon.
oboogie liked this
This age thinks better of a gilded fool / Than of a threadbare saint in Wisdom's school - Thomas Dekker c1598

He's never been the same since that time Harry Potter tricked him into accidentally freeing Dobby the House Elf
I could never die, I'm Chuck Norris.
Fuck the Government, and fuck Boris.

I've no idea how most of that applies to the UK. Seems like a list of stuff that other EU countries have done after going bankrupt.

What king of fucking twat toasts a trade agreement[…]