Headline today is that Watson hasn't apologised enough and should be on his knees/ A ruffian like him isn't fit to lick the boots of a former Thatcher cabinet minister.

The Mail is suggesting that Watson maybe indulging in dirty politics. Or that he is bit too adept at it for Dacre's liking.

Devastating questions Labour's smearmonger must answer... not least, why does he only brand TORIES as child sex abusers?
http://www.dailymail.co.uk/news/article ... z3o9VEzuIk" onclick="window.open(this.href);return false;

-  Sat Oct 10, 2015 11:59 am #431697
The Sun especially has been concoting a flimsy politically motivated conspiracy involving Watson, Hacked Off and Keir Starmer, despite having left the DPP at the time of the phone hacking scandal. Its a pretty dull conspiracy theory that won't fly with the punters as well as ones about bent coppers, journalists and rich Tory nonces covering up kiddy fiddling. As Dacre and Brooks well know.

So why does Whittingdale not get the same front page treatment?

https://tompride.wordpress.com/2014/04/ ... ood-banks/" onclick="window.open(this.href);return false;
Change does not roll in on the wheels of inevitability, but comes through continuous struggle.

http://www.channel4.com/news/tom-watson ... n-saunders" onclick="window.open(this.href);return false;
Don't give me the Star Trek crap. it's too early in the morning. 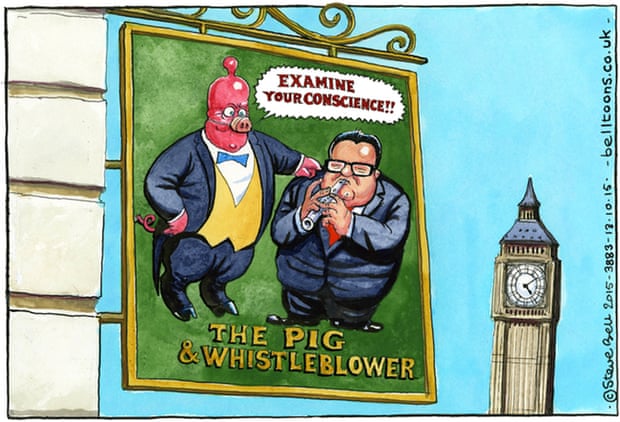 
Cheers, Gaveston ‏@MediocreDave 12h12 hours ago
So glad that we have a free press to hold politicians to account for such things as taking allegations of child sexual abuse too seriously.

Cameron's adviser Patrick Rock is in court over nonce charges this week by the way. The timing of these attacks on Watson is too close for comfort.
Change does not roll in on the wheels of inevitability, but comes through continuous struggle.

-  Tue Oct 13, 2015 10:09 am #431873
I don't like guilty-by-association politics but the Tories and the press live and breath it. So Crosby must be hugely concerned by Watson and others making them look like the party that protects powerful nonces in its ranks. They've found a chink to discredit Watson but it doesn't seem to be washing.


While under a clear duty to report accusations to the police, he did not excite the kind of hysteria – like Brooks when News of the World editor – that led a dyslexic mob to attack a female paediatrician mistaking her for a paedophile.

http://www.independent.co.uk/voices/lab ... 90031.html" onclick="window.open(this.href);return false;
I once asked Rupert Murdoch why he was so opposed to the European Union. 'That’s easy,' he replied. 'When I go into Downing Street they do what I say; when I go to Brussels they take no notice.'

-  Tue Oct 13, 2015 10:11 am #431875
I'm personally finding the notion of the British media accusing someone of hysteria over accusations of child abuse to be perhaps the most chutzpah-laden, hypocritical thing ever.
"There ain't nothing you fear more than a bad headline, is there? You'd rather live in shit than let the world see you work a shovel."

mikey mikey wrote:Labour wants Tom Watson to save it – unfortunately Rebekah Brooks is on a revenge mission


While under a clear duty to report accusations to the police, he did not excite the kind of hysteria – like Brooks when News of the World editor – that led a dyslexic mob to attack a female paediatrician mistaking her for a paedophile.

They're always going to pour into any chink to bash Watson, would Matthew Norman prefer all Labour MPs to spend their careers kissing Murdoch's arse?


Whether Watson can survive this escalation of Brooks’ lifelong pursuit is not really the point. The question is whether a serial resigner, whose bulldozer looks and juggernaut reputation mask a brittle and sensitive nature, has the will to endure the ensuing torment.

If this 'torment' is the best the press can do then bring it on.