Pasarán; They shall pass


McDonnell is indeed talking rubbish. Either you lease or buy the rolling stock, for starters. Buying it might be a good long term investment, but it's an upfront cost.

Yep, absolutely staggeringly stupid that. The only way there would be no upfront cost would be if the companies currently owning the stock and managing the services willingly donated everything to you out of the goodness of their hearts. Which is patently nonsense. There will be compensation due under each TOC franchise, the purchase cost of the stock, possibly things within workers contracts which need settling. The costs would be worth it in all likelihood, but to suggest there aren't any is just mind-boggling.
I could never die, I'm Chuck Norris.
Fuck the Government, and fuck Boris.


The shadow chancellor, John McDonnell, has said that Winston Churchill was a villain rather than a hero, because of his role in the quelling of rioting in a south Wales town.

When asked at an event organised by Politico in London on Wednesday whether the wartime British prime minister was a hero or a villain, McDonnell replied: “Villain – Tonypandy.”

He was referring to the incident in the south Wales town in November 1910 when one miner was killed and about 580 people, including 80 policemen, were injured after Churchill, the then home secretary, sent 200 Metropolitan police officers with a detachment of Lancashire Fusiliers held in reserve in Cardiff to stop riots that erupted after police attempted to break the miners’ picket line.

The soldiers were eventually deployed, although it has been long disputed whether Churchill personally sanctioned the decision. Churchill nonetheless remained deeply unpopular in the south Wales valleys and within the Labour party.

-  Thu Feb 14, 2019 1:40 pm #566579
The correct answer to any complex question requiring a mandatory simplified binary choice is "don't treat me like an idiot."
See also the Brexit referendum.
Kreuzberger liked this 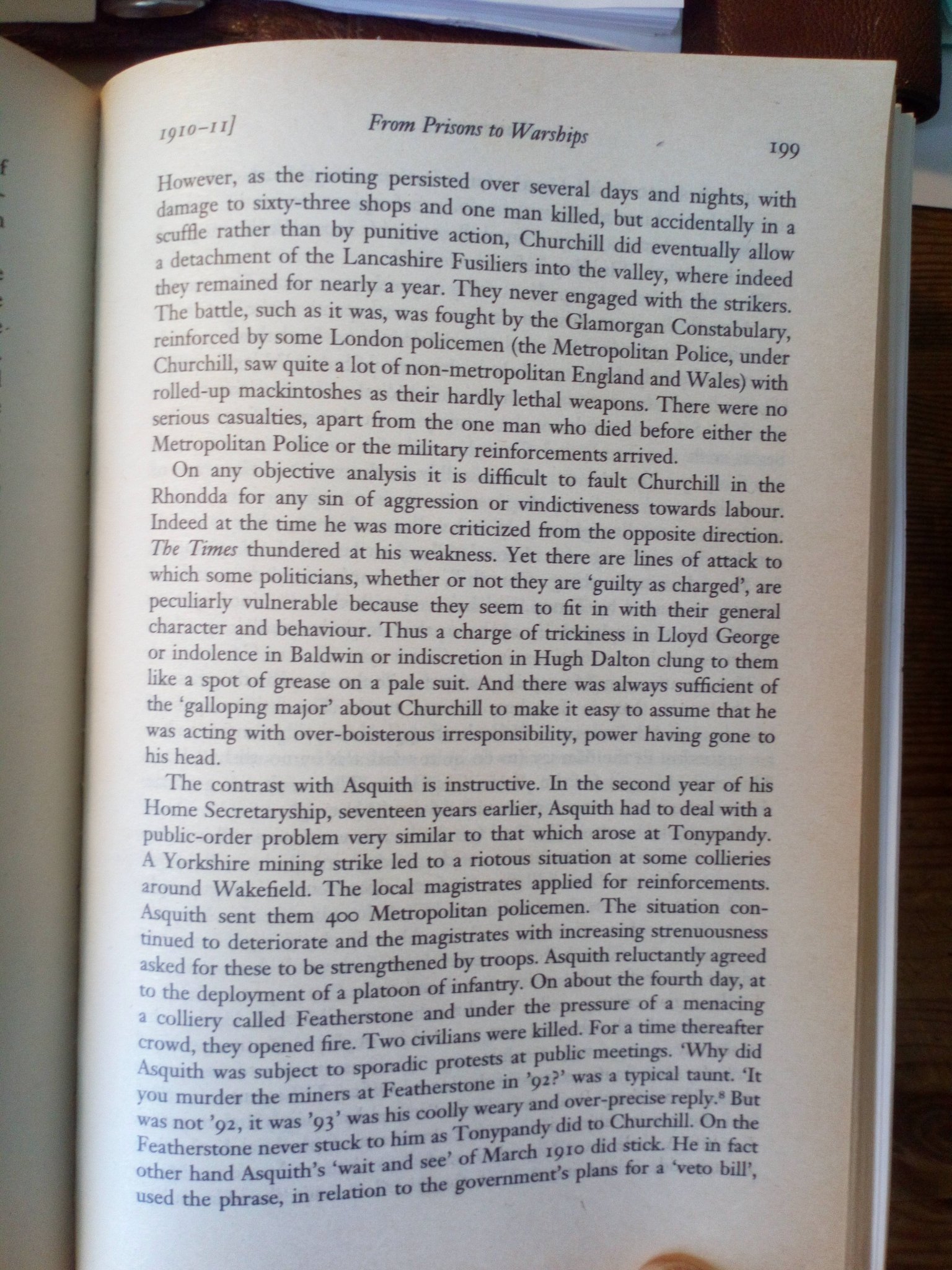 -  Fri Feb 15, 2019 12:28 pm #566640
Churchill as one of the most inept and least trusted peacetime ministers of the early 20th century is neither disputed or a secret. And just as bad as a peacetime PM in the 50s. But cometh the hour etc.
mattomac, Cyclist, Malcolm Armsteen and 2 others liked this


This may seem harmless fun, like Horrible Histories and 1066 and All That, or like “faction” films such as Vice and The Favourite. But we can disregard comedians and film-makers. We cannot disregard serious politicians. McDonnell may have been caught off guard, but this is not harmless. As history is raided, indeed raped, by identitarians and populists, glib judgments on the past become fodder for every tribal grievance. In Wales, any myth is history if the English are involved – though on Tonypandy I commend BBC Wales’s history blog by Phil Carradice.

Reassessing Churchill has moved from cottage industry to parlour game. His career straddled the most turbulent period in modern times, the strain of which on public figures should make current politicians hold their tongues. Churchill was elected a Tory in 1900 but soon switched to the Liberal party, where as home secretary he supported prison reform and Lloyd George’s early moves on social security. In the first world war he resigned after the catastrophic Gallipoli campaign, which he had conceived as navy minister. He then rejoined the Tories, declaring, “Anyone can rat … it takes ingenuity to re-rat.”

So in other words, a 1-line whip. The weakest effort possible above making no effort at all. The same level of support as lukewarm Corbyn managed during the campaign.

Unacceptable. If he wants to respect someone, how about the 80% plus of his party membership who support a 2nd vote, his party's policy (and the spirit of it, not just some fudge), and the majority of the public? How about he respect them before deciding what he, JC and Milne want top all that?

The fucking nerve of any Corbyn supporter who now calls anyone who doesn't support him a traitor or disloyal. This, THIS is disloyalty. This is putting yourself before the good of the country. This is the absolute reverse of patriotism, of bravery, of leading. It's leaving the gate open and then blaming the wolves while claiming you had no power to stop it. It's. Enabling. Tories.

This is for the few, not the many. They know it. We know it. You know it.
Malcolm Armsteen, davidjay, Abernathy and 3 others liked this
Others?

-  Wed Apr 10, 2019 10:45 pm #572044
Corbynite economics super brain Grace Blakeley is claiming credit for this one. A cursory look at the idea it does unusually for the shadow front bench sound like over-complicating the issue. Just stick to building a gazillion new council houses it worked for MacMillan.

youngian wrote: ↑
Wed Apr 10, 2019 10:45 pm
Corbynite economics super brain Grace Blakeley is claiming credit for this one. A cursory look at the idea it does unusually for the shadow front bench sound like over-complicating the issue. Just stick to building a gazillion new council houses it worked for MacMillan.

Oh well that explains it then.
Don't give me the Star Trek crap. it's too early in the morning.

Arrowhead liked this
Others?