-  Mon Jun 20, 2016 8:59 pm #462278
That's terrific. In the tributes today, someone, I think it was Caroline Lucas, said that she hadn't known Jo particularly well, but having heard about the very special sort of person she was, she dearly wished that she had got to know her.

She's not alone in that respect. I share Caroline's wish, and it seems to me that there are perhaps thousands of people up and down the country that share it too.
"The opportunity to serve our country. That is all we ask." John Smith, Leader of the Labour Party, 10 May 1994. 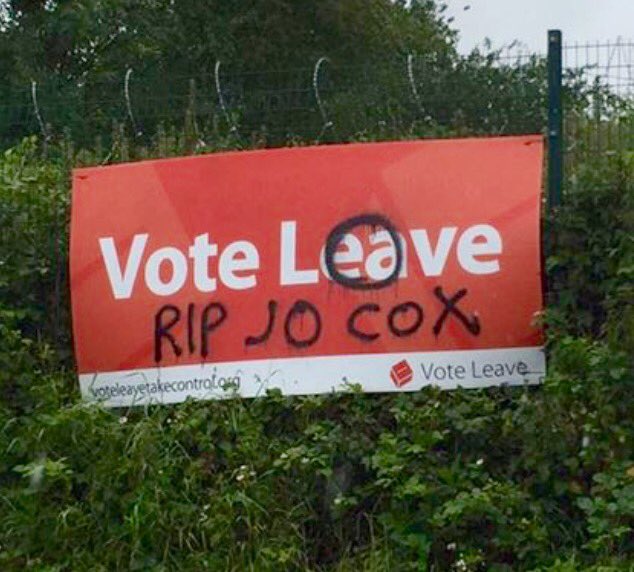 But, for now, I think it is vital we remember Jo Cox: a mother of two young children, a wife and a tireless campaigner.

As a fitting tribute to Jo’s memory, we are asking people to share this drawing of her

Even as she was being attacked, her only thought was for the safety of others as she pleaded with her killer to just target her and leave her staff alone.

Jo embodied HOPE. In her maiden speech in Parliament she said that “we are far more united and have far more in common with each other than things that divide us.”

That was Jo Cox.

HOPE not hate promises to continue Jo’s work. We will continue to fight injustice and hatred, and we will look for peaceful and constructive ways to break down barriers and division. And it is a commitment that I hope you will make too.

In the meantime, let's pay our respect to Jo and all she stood for by sharing this image on social media.

https://www.facebook.com/hope.n.hate/?f ... nref=story" onclick="window.open(this.href);return false;
The greatest Hamlet of his generation, reduced to this.

-  Wed Nov 23, 2016 1:59 pm #485568
I completely agree with the sentiment that Jo must be remembered. I also feel now is the time where people absolutely need to be held to account on their reporting. The Daily Mail (so far) refusing to label him a terrorist is a disgrace.

-  Wed Nov 23, 2016 2:04 pm #485570
And as I've mentioned a few times, plenty of people on the right (Hopkins, Rees Mogg etc) have tried to hijack her name and memory, saying that her killing mustn't be politicised, or that she spoke for free speech so that means she supported whatever they had to say.

This is unacceptable. For one, her killing was an overtly political act. Second, I don't know if Katie Hopkins and Jo Cox ever met, but I don't imagine they'd have got on that well or found much common ground. And Hopkins has her free speech - she's now trying to shut down anyone who disagrees with her.
"It is not enough to succeed. Others must fail." - Gore Vidal.

-  Wed Nov 23, 2016 2:07 pm #485573
I suspect that will continue, too. The likes of the Mail will control the narrative on this. Already on twitter there are a hell of a lot of people using the argument that mental illness is always used to excuse Islamic terrorists by the media. I mean...this is mind boggling. It's literally completely untrue and the complete opposite of the truth. Yet it's already sticking.

Ostracisation from regular society (self inflicted or not).
Feeling of disepowerment, or lack of representation (or that something you take seriously is ignored by 'the mainstream').
Drug/alcohol misuse.
Obsession with 'a cause' and material related to it.
Lack of stable family/romantic relationship.
Desire to 'be someone' and make a statement.

Obviously not all these apply to everyone, and there are other factors. But generally these are the warning signs. The route of indoctrination tends to vary from cause to cause (and case to case), but the long and the short of it is that there ain't much difference between Mair and the two guys who stabbed Lee Rigby.
"It is not enough to succeed. Others must fail." - Gore Vidal.

noodleneck
Ok the guy that done this, it was wrong, but to say it was an act of terror gets me. I would say an act of frustration caused by the lefties and Germany, suppressing us at every step of the way and dictating. I think he just had enough of all the bull and she was in the wrong place at the right time. Looking to blame someone Blame the Lefties Germany.
+2

and couple from user wwwest


wwwest
This was not an act of terrorism. The guy was either mentally unstable or was just pissed off with his MP. Lots of us get pissed off with our MP's because generally we do not agree with the views they express or the decisions they make. This is just a load of hogwash. Maybe she should have done more for the people who voted her into office.


wwwest
Do not know how her dodgey husband has the gall to appear in front of the cameras. Maybe he is trying to get a job - so he is putting his face about but I doubt anyone would give him a job because no women will work with him. He is a disgrace. +3

Andy McDandy wrote:Prevent training points out that wannabe terrorists, regardless of cause, tend to have a few things in common. These, which we look out for in HE students, include:

Ostracisation from regular society (self inflicted or not).
Feeling of disepowerment, or lack of representation (or that something you take seriously is ignored by 'the mainstream').
Drug/alcohol misuse.
Obsession with 'a cause' and material related to it.
Lack of stable family/romantic relationship.
Desire to 'be someone' and make a statement.

Obviously not all these apply to everyone, and there are other factors. But generally these are the warning signs. The route of indoctrination tends to vary from cause to cause (and case to case), but the long and the short of it is that there ain't much difference between Mair and the two guys who stabbed Lee Rigby.

Ive been on a few web fora with people like this - and they tend to be anti-semitic, misogynist (think MGTOW) racist (although couched as 'I dont hate them, I just want whites to be left alone')

People like that are generally dismissed as losers looking for someone to blame. So by extension they're probably harmless - if they cant get a girlfriend how the fuck will they manage the armed insurrection they often advocate, right?

But then every now and again one of them gets pushed just that little bit too far...


The rifle used by Thomas Mair to murder Jo Cox had been stolen from a car in another part of West Yorkshire less than 12 months before the killing.

The senior detective in charge of the murder investigation, Det Supt Nick Wallen, revealed after the case that the .22 rimfire weapon had been stolen from a four by four utility sports vehicle in Keighley in August 2015.

He added: “How he, an anti-social loner with no previous criminal history, no criminal ring of individuals around him, came into possession of it is very much an active line of enquiry and I would like any assistance as to how he came by it.”

Det Supt Wallen confirmed that the weapon had previously been legally owned and had been stolen from the boot of a vehicle.

EDIT: sorry, only just seen this has also been posted in t'other thread

-  Thu Nov 24, 2016 2:46 pm #485718
That's a really clever article. It covers it's shit stained backside by chucking in the words terrorist and murderer in the headline then it's on to insinuate it was Jo Cox not helping him and the foreigners taking his house who were at fault.

She also had to defend her boss against charges of[…]

Oh, I agree, but going to to take a fucktastic fuc[…]