The new leader of the Labour Party

bluebellnutter wrote: ↑
Mon Feb 17, 2020 11:44 am
If you have to have him in there (and here's a tip, you really, really fucking don't) then give him health. That way he's relatively out of the way but will definitely pay attention because it's something he genuinely cares about.

He's an advocate of fucking homeopathy.

(Fucking, in that sentence, is used as an intensifier, BTW....)
oboogie liked this
Others?

I didn't know Jez wanted to stay on the frontline. More easy to imagine him doing a (more cautious) Chris Williamson style roadshow.

Tubby Isaacs wrote: ↑
Mon Feb 17, 2020 12:07 pm
Apologies for quoting my own post. But didn't the membership approve the Brexit policy at the conference? This rewriting of recent history is breathtaking.

I think his argument is that if Corbyn had faced it down and said "it's me or Remain" then the membership would have backed him over Remain. I'm not so sure, definitely in his early years but I think by the end of last year with the immediacy of things people might well have started getting some chilly toes...
I could never die, I'm Chuck Norris.
Fuck the Government, and fuck Boris.

Young and co can argue that Brexit lost the election, but not that the policy was somehow foisted on an unwilling party by Keir Starmer.

-  Mon Feb 17, 2020 3:46 pm #598646
Labour don’t need anyone telling any member of the public they were wrong. That’s what they’ve been doing for the last 5 years with Corbyn - constantly harping on that if you just listen to him, and ignore all the criticism, the skeletons in the closet, the unforced tactical errors, the incompetence, the nepotism, the interference, the bullying from his team, you’ll realise he’s great.

Labour don’t need that. Labour need someone to convince the public that what they’re offering is right, and they have the skills to do it.

I think Starmer with Nandy in a top role where she gets to communicate a lot - because she’s shown she’s bloody good at it* - could be formidable.

*and it shows that Corbyn limiting the exposure of his best assets during the election in favour of himself and his fucking inept little band of dumb as all hell acolytes was yet another unforced error of straightforward hubris and incompetence that has nothing whatsoever to do with any form of media bias to add to the pile.
oboogie liked this

Would counter the issue of another male leader.

Could also see Phillips at Health.

Rachel Reeves is an economist.
Arrowhead liked this
That subtle admixture of the absurd and the surreally plausible...

But "events, dear boy" are the leader's job. Maybe the thing to do was take May's deal, but Jez, with his Kipper previous, wasn't going to be able to make that work. And what he did go for, belatedly going for a referendum after a renegotiation than no Leave voter cared about, didn't work either. People like Liam Young seem to think it gets Jez off the hook that he came under difficult pressures. It doesn't. See also the blame attached to the (admittedly not very good) Swinson. Other parties come for your voters. I don't see the Jez apologists putting the blame for the 2010 defeat on the Lib Dems, poor old Centrist Neoliberal Gordo has to take full responsibility.

And anyway, this leaves aside the more general responsibility the leader and his team had. I'd venture somebody else could have had swing voters in Blyth Valley thinking "You know what, that Johnson deal looks like shit close up? I would like my say on it".

But going forward, I think it'll be interesting to see how Labour play Brexit. Obviously, Starmer isn't going to try and rejoin soon, and I hope he has the foresight to swerve hypotheticals about the longer term. I'd stick pretty close to "You promised it, you deliver it".
youngian liked this

Christ, we're going to get all that stuff again, with 5 years more worth on top?

Can't see what Keir said. If he has any sense, he'll have said something about Labour values too, before heading out of the hustings, George Costanza style. 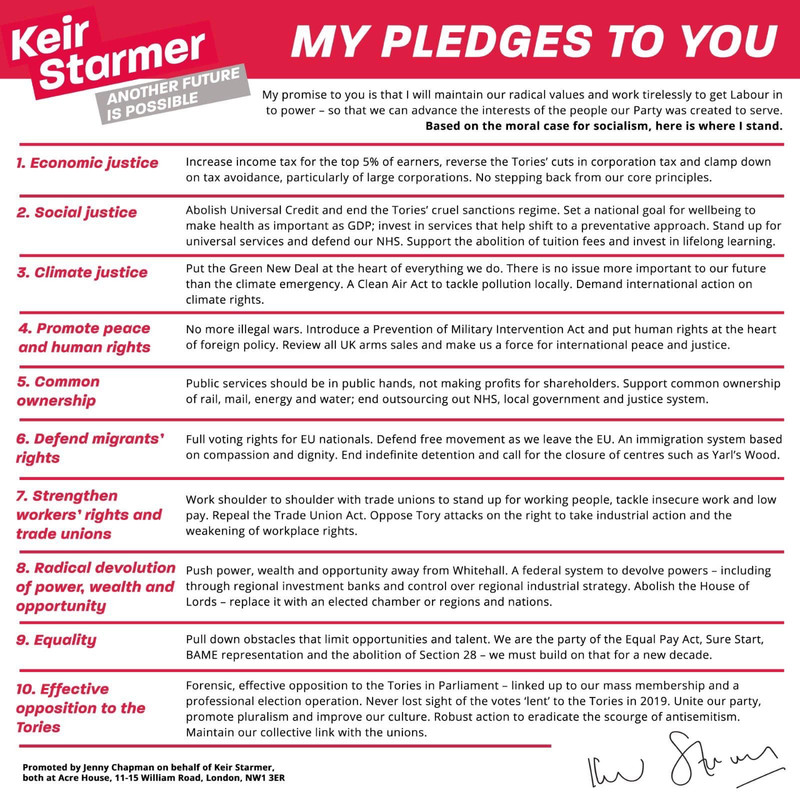 Next - who is the registrant and owner of that domain?
"I am not expendable, I'm not stupid and I'm not going outside."
(with apologies)


It is not explained in the press release or accompanying comments from Starmer, but this is what he recently specified on The Andrew Marr Show: “I would pass legislation that said military action could be taken if first the lawful case for it was made, secondly there was a viable objective and thirdly you got the consent of the Commons.”

This approach, focussed on legal criteria rather than more political priorities, is likely to characterise Starmer’s leadership if he wins on April 4th. It reminds us that he opposed the Iraq war on the basis that it was “not lawful under international law because there was no UN resolution expressly authorising it”.

The requirement to gain the consent of MPs through a Commons vote would formalise what is currently only an acknowledged convention. We don’t yet know the details of what will constitute ‘making the lawful case’ nor a ‘viable objective’. But the proposal doesn’t seem to have an in-built assumption against all types of intervention, despite its title. It only seeks to establish reasonable hurdles.

So not all that radical.
Tubby Isaacs liked this
Do what you can, with what you have, where you are.

It's fairly abstract stuff and only one political[…]

One shouldn't laugh. I just hope there aren't to[…]

This is what they voted for in the Red Wall, with […]

A few people would buy her defence, in fairness.My[…]