"Offenders on Home Detention Curfew must comply with the conditions of their curfew or release licence. If they fail to do so, they can be immediately recalled to custody.

Fancy breaking the terms of your parole. Knob!
This age thinks better of a gilded fool / Than of a threadbare saint in Wisdom's school - Thomas Dekker c1598

The court heard McGee was obsessed with far-right politics, but was not a member of the English Defence League, despite attending one of their marches and being gifted with an EDL T-shirt and jumper for his 18th birthday by his mother.

He also watched a horrific video of men being bound and executed under a swastika flag, and his laptop had links to websites including gore videos, French skinheads, Russian racism, handguns for sale UK and Germany, the court was told.

The prosecutor accepted he was not a terrorist and that he did not intend to help a terrorist group. When he was interviewed by the police, the fifth generation British Army man said he made a bomb on leave "out of boredom" and that he was interested in right-wing politics because he did not like mass immigration.

He put a nail bomb together, but he's not a terrorist or owt. The EDL doesn't really have a formal membership so that's bollocks as well. Absolutely no way this fucker would have got off so lightly were he Muslim and/or dark-skinned.
Change does not roll in on the wheels of inevitability, but comes through continuous struggle.

he made a bomb on leave "out of boredom" and that he was interested in right-wing politics because he did not like mass immigration.

A non racist libertarian no doubt

he made a bomb on leave "out of boredom" and that he was interested in right-wing politics because he did not like mass immigration.

A non racist libertarian no doubt

I come from the standpoint that imprisonment should only be used as a last resort but "bored teenager" or not, this is one seriously dangerous individual who clearly has the proven ability to cause major loss of life. He needs to be out of circulation for a very long time. To put things in to perspective, there's a minimum 5-year sentence for carrying a gun if you're over 18.

And, what's with the CPS not pressing terrorism charges? Did they think there was little likelihood of a conviction or that it wasn't in the public interest?

"Members of the jury, we found a nail bomb."
Jack believed in the inherent goodness of humanity, and felt a deep social responsibility to protect that. Through us all, Jack marches on.

Functioning at approximately the level expected from an average, or somewhat below average, seven-year old.
Mene, mene tekel upharsin, Johnson. 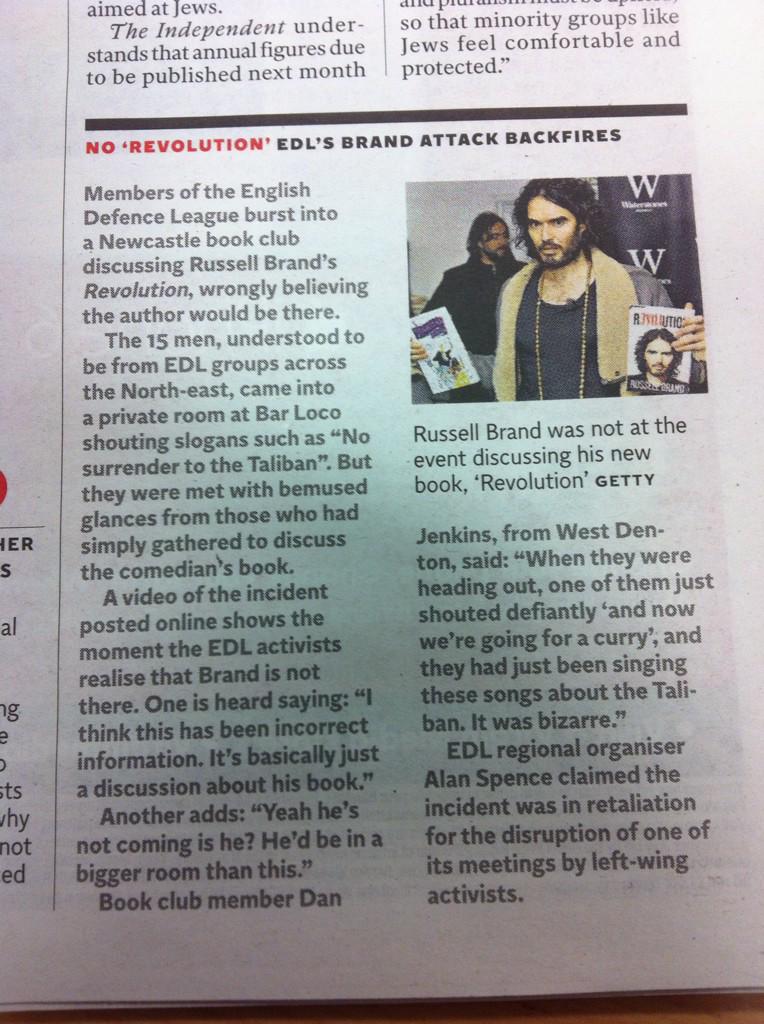 
An MP has called for the English Defence League (EDL) to stop targeting Luton after it was revealed more than £20,000 was spent policing a protest that attracted 12 demonstrators.

The EDL planned the New Year's Eve protest in response to an Islamic conference in the town.

Gavin Shuker told the BBC it was "unacceptable" taxpayers had to pay for "12 idiots shouting in a car park".

*Not that you need the EDL to manage that, TBH.
"There ain't nothing you fear more than a bad headline, is there? You'd rather live in shit than let the world see you work a shovel."

Andy McDandy wrote:Apparently marching in Dudley tomorrow, locals saying the town will be effectively shut down*.

*Not that you need the EDL to manage that, TBH.

Around 600 there according to police. More than their usual crowd these days but it's easy to get to, the police bend over backwards to accommodate them in the town and there's a planned mosque to attract local unattached bigots to swell their numbers. In 2010 they got 5,000 here.
We've got democracy! Who needs solidarity?

-  Sun Feb 08, 2015 2:02 pm #402421
According to the local paper, a Dudley rock pub 'reluctantly' acted as a meeting spot for the knuckle draggers, after the police practically begged them. The pub is giving the day's takings to charity - appropriately enough one researching brain injuries. I love the black country sense of humour at times.
"There ain't nothing you fear more than a bad headline, is there? You'd rather live in shit than let the world see you work a shovel."


...and Tommy's back in the room
The world is not full of arseholes; but I always seem to encounter at least one a day!

"Isn't it reassuring to have bobbies on the b[…]

"Eighty majority, fuck you, what you gonna do[…]

Virtue signalling at its least finessed.