spoonman wrote: ↑
Thu May 09, 2019 9:42 pm
Shitlords trolling and posting crap on the internet has basically been about since Mosaic was released.

That late? I'd say it happened as soon as someone got a VT100 into a bulletin board and/or Usenet....

Although my membership has now lapsed, I use eternalseptember.org for my Usenet feed.
"I am not expendable, I'm not stupid and I'm not going outside."
(with apologies)

https://www.bbc.co.uk/news/uk-england-cornwall-48230438
"I am not expendable, I'm not stupid and I'm not going outside."
(with apologies)

I'd be happier if these pricks were ignored, received no publicity or opportunity to play the victim.

Less bothered when Tommeh gets milked, he's well known and opinions are already formed.
The educated differ from the uneducated as much as the living from the dead. Aristotle

-  Fri May 10, 2019 10:48 pm #574579
Tommy likes to have a token gay nearby, it's the "we hate Islam because it isn't liberal enough" thing. I wonder what happened to Caolan Robertson?
Soppy anti-British, pro-crime, anti-education, pro-immigration, anti-family nonentity

-  Fri May 10, 2019 11:20 pm #574580
Tommeh cancelled his appearance in Blackburn tonight. Considering that he was going to probably one of the most far-right friendly areas, it really showd him up.

He's meant to be in Bolton tomorrow. I can see some of the Blackburn protestors thinking that a short trip out of town may be worth it.
"It is the duty of a newspaper to comfort the afflicted and afflict the comfortable."

This will really hurt him.

Earlier this week, West Midlands police announced an investigation into Benjamin's remarks made in a YouTube video about Labour MP Jess Phillips, where the UKIP European election candidate questioned whether he'd rape her before concluding "nobody's got that much beer".

It was the second time the YouTuber has made rape remarks about the Labour MP. In 2016, Benjamin tweeted: "I wouldn't even rape you @jessphillips" in response to Phillips posting about rape and death threats she received online.

YouTube removed the video from the Sargon of Akkad channel, while Phillips gave an interview to the BBC questioning whether Benjamin should still be allowed to run in the EU elections later this month.

On Friday afternoon, YouTube told BuzzFeed News the company was now taking the step of demonetising Benjamin's Sargon of Akkad channel, which has almost 1 million subscribers, effectively removing Benjamin's ability to make advertising money from videos he posts on the platform.

A company spokesperson also confirmed Benjamin had been removed from the "YouTube Partner Program", which gives popular video creators access to a share of YouTube's advertising money, assistance when it comes to copyright, and direct contact with the company's IT support. 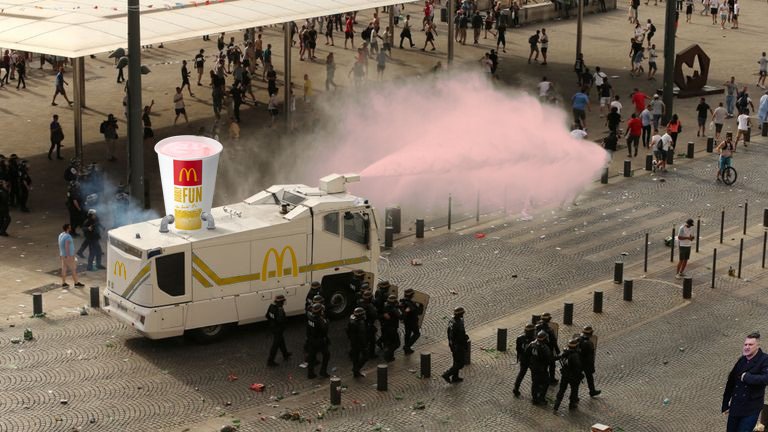 Timbo liked this
The Red Arrow is currently appearing in 'Ram it home, Mrs Henderson' at The Minack Theatre, Penzance

http://www.falmouth-anchor.co.uk/2019/0 ... its-truro/
The Red Arrow is currently appearing in 'Ram it home, Mrs Henderson' at The Minack Theatre, Penzance

Resource Limit Is Reached
The website is temporarily unable to service your request as it exceeded resource limit. Please try again later.

Police were called to Truro’s Lemon Quay after a scuffle broke out between a masked protestor and the security team of UKIP European Parliamentary candidate Carl Benjamin.

The unidentified protestor, who was masked and dressed in black, was tackled to the ground after attempting to pour a milkshake over the prospective MEP, mimicking a similar assault on UKIP advisor Tommy Robinson earlier this month.

In a statement concerning the incident, the police said that the assault had been investigated but no formal complaint had been made as the alleged victim did not identify himself to officers at the scene.

… Benjamin branded the protestors as “zealots”…

During an exclusive interview with the Anchor to be released before the elections, Benjamin branded the protestors as “zealots” after we were interrupted by a woman throwing dead fish at him.

The Truro resident, who declined to be identified by name, spoke to the Anchor after the incident and said that her actions were a “knee jerk reaction” and that Benjamin was “not falling far off” being a Nazi, but did concede that he “should be allowed” to speak freely to his supporters.

The event, which was also attended by a number of peaceful protestors, appeared to run smoothly after the two assaults, although a local busker playing the trumpet attempted to drown out Benjamin’s microphone.

Speaking to the Anchor, two of the peaceful protestors, who wished to be referred to as “local female protestors” questioned “how low UKIP will go” to select a candidate who, in their view, “thinks rape is a joke”.

The event lasted from 12-3pm and was attended by a small crowd, as well as protestors | Alex Welsford/FA

Also at the rally was Milo Yiannopoulos, the former Breitbart News editor and self-professed “provocateur”, who rose to fame for his controversial comments, such as describing Islam as a “barbaric” and “alien” religion.

Yiannopoulos was banned from Facebook earlier this month, and many right-wing figures cut ties with him in 2017 after he was accused of defending paedophilia, a claim which he denies.

Speaking to the Anchor at the rally, Yiannopoulos voiced support for Benjamin, stating that he was running a campaign of “showing not telling” and was exposing “how the media operates”.

When asked about the infamous tweet in which Benjamin said he “wouldn’t even rape” Labour MP Jess Phillips, Yiannopoulos said he empathised with “the purpose” of sending the tweet to “get the attention” of what he termed “shrieking metro front pages”, but that it was “not the way I would do it”.

The interview with Benjamin, as well as those conducted by the Anchor with candidates from every national party standing for European Parliament seats in the South West, will be available on YouTube early next week.
The Red Arrow is currently appearing in 'Ram it home, Mrs Henderson' at The Minack Theatre, Penzance

A fat, out of shape cunt says what?
The educated differ from the uneducated as much as the living from the dead. Aristotle

Hate-filled platform has no restrictions on antisemitic, misogynist or racist content

https://www.theguardian.com/politics/20 ... -far-right
They fuck you up your mum and dad,
But not as much as Brexit will.

A fat, out of shape cunt says what?


Says his brownshirts will deal with any protestors.
We've got democracy! Who needs solidarity?

I have no idea what this is all about. He seems to[…]

Ever closer to that live meltdown and carting of[…]

Afraid not, and although I'm heading back to Norwi[…]