-  Fri Mar 10, 2017 9:42 am #498024
The Tories have succeeded in getting the "little people" arguing amongst themselves, employed v self-employed, while the major tax dodgers, their Corporation mates, get off scot-free as per. Clever. It's just a variation on the attacks on benefits claimants. It's all purposely planned. Divide and conquer. Let's get the peasants fighting against each other to distract them.

"It's the pesky Europhiles making us look bad!"
I could never die, I'm Chuck Norris.
Fuck the Government, and fuck Boris.

"It's the pesky Europhiles making us look bad!"

And they are terrified
.
"He's the leader of the gang. He's the top, he's the tip, he's the championship. He's Top Cat. And he's scum!"

-  Fri Mar 10, 2017 1:06 pm #498049
Dacre and Gallagher will never starve. Littlejohn and Liddle are made for life. Their readers? As long as they're told that it's all someone else's fault, and that they feel relatively OK compared to someone else, they'll lap it up.

Problem is, unless the EU leaders are feeling in remarkably generous mood, there's no reverse. I can see us going back to the early 1960s, demanding entrance to "their club", moaning about the lack of gratitude and wanting a big old slice of that Euro-pie. Meanwhile our new bestest friend across the sea couldn't give a damn. Something something mess of pottage.
"I've tried to think of something clever to say about Rod Liddle, but I think he's just a cunt."

-  Fri Mar 10, 2017 2:31 pm #498066
Most journalists and media people are self-employed, hiring themselves out to papers rather than being employed by them in the traditional way. Which might explain the large backlash too, probably not a great idea to hit journalists financially.
I could never die, I'm Chuck Norris.
Fuck the Government, and fuck Boris.

-  Fri Mar 10, 2017 2:33 pm #498067
There's a theory (supported by Simon Schama among others) that the tax on paper was what really tipped the 13 colonies into revolt. Great idea, tax paper, the one thing every lawyer, priest, journalist and other opinion former uses daily...
"I've tried to think of something clever to say about Rod Liddle, but I think he's just a cunt."

youngian wrote:A lot are going to be out of touch metropolitan elites; freelance designers etc.

Fair enough
Don't give me the Star Trek crap. it's too early in the morning.

Just one in four voters now regards the Tories as a low-tax party, while almost half of those polled say they trust the Conservatives less as a result of Mr Hammond's Budget. More than half of voters – 55 per cent – say Theresa May should have honoured the party's manifesto pledge not to raise taxes.

Figures on voting intentions are equally worrying for the Prime Minister, with almost half of those questioned saying they are less likely to vote Tory because of the Budget, including one in seven Conservative voters.

BREAKING - Full Govt U turn on National Insurance. Chancellor says there will be no increase. 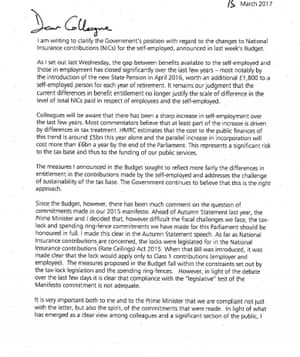 Most polling shows the US is a slightly left of […]

But won't that mean there are a lot more people […]

I wasn't sure the original was genuine. It wasn't […]

He couldn't get over the military style uniforms o[…]