Malcolm Armsteen wrote:Chatting to my neighbour today, ex Royal Marines, 3 tours, command rank. He is horrified by the DUP/May link. Saw too many of his blokes killed by the UVF, would shoot Robinson in a second. He sees no difference between DUP and Provos in terms of danger.

Yeah. And isn't funny how all those paramilitaries turned up to intimidate Naomi Long when she won Robinson's seat?

-  Mon Jun 19, 2017 10:33 pm #510901
I presume you're au fait with the dodgy DUP/Not DUP leaflet detailing the various Lundy moments of the Alliance party that kicked those protests off, and eventually snowballed into the Fleg protests?

Big Ian was a past master of leading on paramilitaries, protestors, marchers, strikers &c. and somehow having his hands passably clean when the shit hit the fan.
Ní uasal aon uasal ach sinne bheith íseal: Éirímis

-  Tue Jun 20, 2017 6:53 pm #511021
In today's DUP news, Arlene has been caught with her pants on fire as the Scottish Government publish a letter sent to them by her concerning gay marriage in Scotland that she claims she never wrote...

...meanwhile the newly elected MP for South Belfast Emma Pengelly claims that there is "no demand" for the removal of UVF flegs (along with Union flags) in a mixed housing development area in her constituency.

http://www.bbc.co.uk/news/uk-northern-ireland-40336803" onclick="window.open(this.href);return false;
"...bigger and better than the Titanic, 'cos only 400 women went down on the Titanic!"


Talks between the DUP and the Government "haven't proceeded in a way that DUP would have expected", sources have told Sky News.

The sources say Northern Ireland's Democratic Unionist Party is urging the Government to give "greater focus" to the negotiations and that the "party can't be taken for granted".

A day before setting out her legislative measures in the Queen's Speech, Theresa May has yet to secure a deal with the DUP. Her Government programme goes to a Commons vote next week.

A spokesperson for Number 10 has said talks are continuing. They did not comment about when they expect a deal, if any, to be sealed.

The talks have been ongoing since the Conservatives failed to win an outright parliamentary majority in the disastrous General Election on 8 June. http://news.sky.com/story/dup-talks-not ... s-10921500" onclick="window.open(this.href);return false;

Tory MPs say anyone with a basic understanding of Northern Ireland knows there is no way the DUP would bring down the government and allow Corbyn into Number 10.

A formal deal they argue therefore isn’t a necessity, a Tory minority government would still be able to pass a Queen’s Speech without one. By putting all her cards on the table and pre-announcing her unequivocal desire for a deal before it had been negotiated, May handed the DUP all the negotiating power. As one Tory snarks, “Good thing we don’t have any other big negotiations coming up…” https://order-order.com/2017/06/20/tory ... gotiating/" onclick="window.open(this.href);return false;

" onclick="window.open(this.href);return false;
"...bigger and better than the Titanic, 'cos only 400 women went down on the Titanic!"

Perhaps they've decided that no DUP deal is better than a bad DUP deal.

To be fair the Tories are quite right to walk away if the DUP are getting greedy and dare them to vote down a Queen's Speech which would put Corbyn into No 10.

I wonder if the DUP are trying to get EVEL withdrawn or watered down in some way - they were very critical of the new law when it was introduced a couple of years ago.
"Patience is bitter, but its fruit is sweet" - Jean-Jacques Rousseau

Arrowhead wrote:Good grief, how much longer are these "negotiations" likely to carry on for? Back in 2010, I'm pretty sure the Lib Dem talks were done & dusted within a week of the actual election itself.

I wonder if the DUP are trying to get EVEL withdrawn or watered down in some way - they were very critical of the new law when it was introduced a couple of years ago.

They've got form for international nose-poking.
I think it was this forum where we discussed their demands for votes in Indyref 1.

Their Argument: We're the Ulster Scots, we is da people.
The educated differ from the uneducated as much as the living from the dead. Aristotle

Is it possible the Tories have some, er, balaclava related dirt on the DUP?

Arrowhead wrote:
Good grief, how much longer are these "negotiations" likely to carry on for? Back in 2010, I'm pretty sure the Lib Dem talks were done & dusted within a week of the actual election itself.


Osborne had written them months before then Clegg just signed it off. 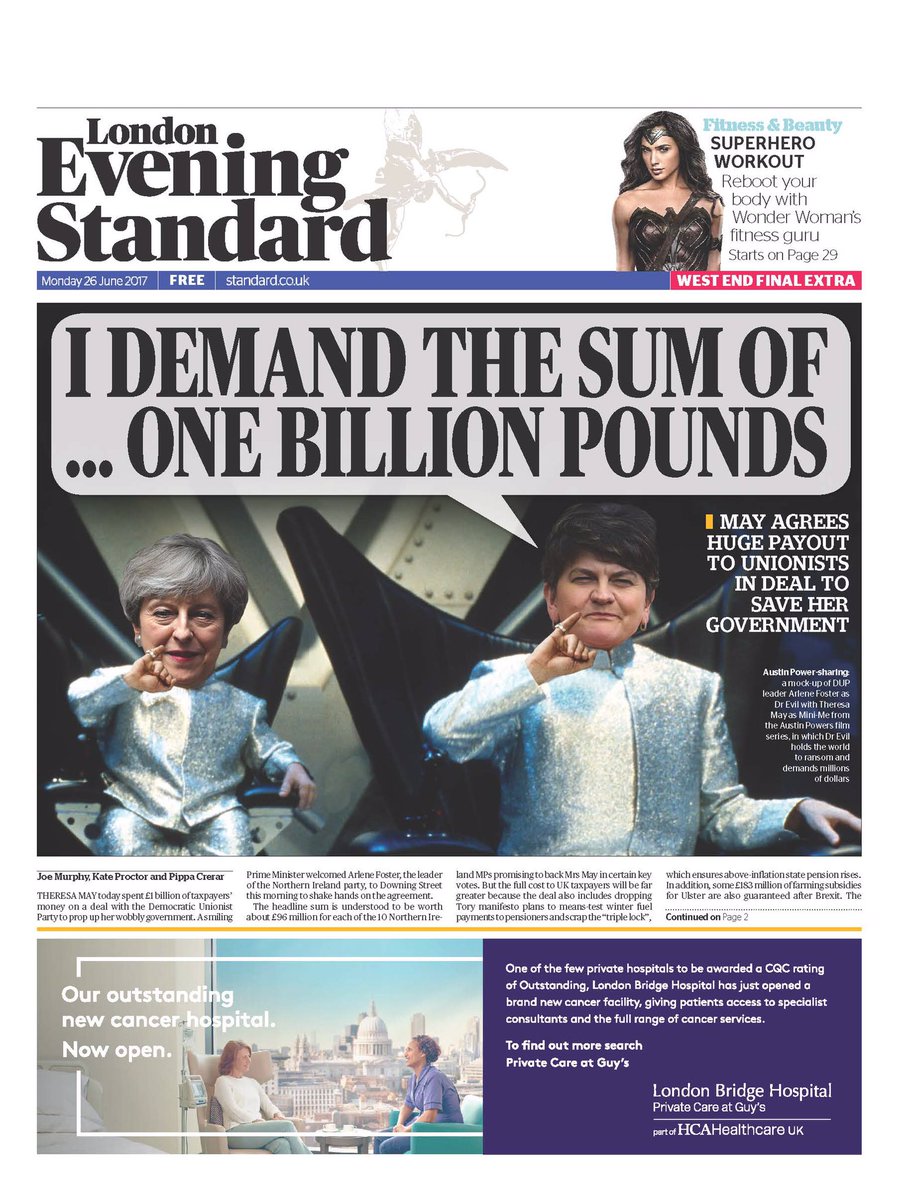 Zinger from Layla Moran: "From clap for care[…]

I realise that now, and have edited my posts to su[…]

Yes to all of this. The Italian Embassy should […]