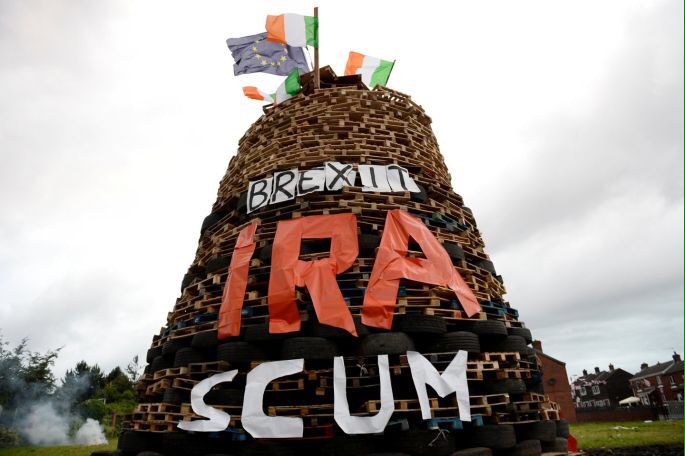 http://www.heraldscotland.com/news/1542 ... f=mrb&lp=6" onclick="window.open(this.href);return false;
They fuck you up your mum and dad,
But not as much as Brexit will.

In a special souvenir programme to mark the event, Orangemen were advised to “reject and repudiate the superstitions of Rome” because rejecting God's offer of salvation would mean “tragically when you die your soul is lost in hell forever.”


Where you're hectored for eternity by Stephen Nolan

Hard to see why the DUP should be entitled to vote on this issue.

https://www.theguardian.com/politics/20 ... -challenge" onclick="window.open(this.href);return false;
They fuck you up your mum and dad,
But not as much as Brexit will.

WTF? wrote:Gotta love Gina Miller, the Hurricane Irma of Brexit. A viscount in gaol and two spanners in the works. I'll bet they wish they'd never heard of her

Am I alone in being worried.
The DUP have "friends" a lot scaarier than a Viscount with an untamed keyboard.
The educated differ from the uneducated as much as the living from the dead. Aristotle

-  Mon Sep 11, 2017 1:04 pm #518633
If the DUP bump off Gina Miller even a few sane Tories ought to start thinking "hang on, who exactly is it we're allying ourselves too here". Of course the headbangers would love it.
I could never die, I'm Chuck Norris.
Fuck the Government, and fuck Boris.

-  Mon Sep 11, 2017 1:09 pm #518634
I think its worrying that we are now in a position where such things are starting to be discussed seriously. Bumping off inconvenient political opponents is not something we are used to in Britain, I associate it with dictators.

Where the hell is the country heading?
Were going to hell in a handcart, you couldn't make it up!

-  Mon Sep 11, 2017 1:31 pm #518639
If the DUP do get shafted it'll be the Tories who get the blame. I'm pretty sure the government must have known the deal would need parliamentary approval. Not so sure the DUP would have been aware of it. Gina Miller has rectified that.

They'll get the money though, if only because the Tories who aren't keen on the deal will be shit scared to vote against it.

WTF? wrote:Gotta love Gina Miller, the Hurricane Irma of Brexit. A viscount in gaol and two spanners in the works. I'll bet they wish they'd never heard of her

Am I alone in being worried.
The DUP have "friends" a lot scaarier than a Viscount with an untamed keyboard.

They're all rather too busy selling drugs and shooting each other in a series of feuds that's gone on since time immemorial. The Wombles were never much for assassinations of high profile targets in any case. Random viciousness against civilians was/is their thing.
Ní uasal aon uasal ach sinne bheith íseal: Éirímis

-  Mon Sep 11, 2017 9:18 pm #518666
The UDA. So called because of their membership's fondness for Army-surplus fur lined snood parkas, giving them a resemblance to said furry creatures, m'lud. Probably the loyalist group that had the least distant relationship with the DUP in past days, mainly due to how many years they went unproscribed.

Ta for that.
"I am not expendable, I'm not stupid and I'm not going outside."
(with apologies)

-  Tue Sep 12, 2017 11:23 pm #518756
Funny enough, today the Red Hand Commando, a UVF sub-group, applied to be removed from the proscribed organisations list, and legalised. The RHC in it's own right were very, very bad boys indeed*, but they also served as a flag of convenience for the UVF and others, resulting in their bizarre legality throughout the troubles.

It's notable that most parties here have issued statements along the lines of "go away and fuck yersel", with the exception of the PUP ( political wing of the UVF) who see it as a positive step. The DUP have said absolutely nothing on the subject.

* Indeed, outside the Security Forces augmented Glenanne Gang and the like, they were by some distance much more secure and effective operators than their loyalist peers. Carried out some fairly audacious shit back in the day, once bombing a different Catholic pub every night for a fortnight, for example.
Ní uasal aon uasal ach sinne bheith íseal: Éirímis

Useful idiot Dan Wootton has been charged with tel[…]

Perhaps not she (Wera Hobhouse) and her husband […]

I wonder what Starmer will do about this? A Labo[…]

Enjoy, Kreuzie - but you know what's coming next[…]