-  Wed May 30, 2018 2:56 pm #544051
Holy Shit. The Russian journalist Arkady Babchenko assassinated on Putin's orders has just given a press conference. The Ukranian authorities faked his death to expose the Russian agents after him.

Catkins wrote: ↑
Wed May 30, 2018 2:56 pm
Holy Shit. The Russian journalist Arkady Babchenko assassinated on Putin's orders has just given a press conference. The Ukranian authorities faked his death to expose the Russian agents after him

How?
They fuck you up your mum and dad,
But not as much as Brexit will.

-  Wed May 30, 2018 9:13 pm #544078
I'm not sure. It sounds like the Russians hired a local hitman to keep it arms-length, then the Ukrainian authorities announced he'd been shot dead as the Russians were expecting, which may have resulted in them going to make a pay-off, at which they were arrested.

Even his wife thought he was dead apparently.

(Flowers from the petrol station forecourt won't fix this one. He's going to spend the next 6 months sleeping on the sofa)
"The architectural style is early maniac" - Vila Restal


The same message came from spectators at last month's Victory Day parade of soldiers and tanks through central Volgograd. "England was never our ally," a pensioner in military uniform snorted. "No-one wants a strong and powerful Russia."

Relations were far warmer in 2010 when Russia won the right to host the World Cup.

"If they behave everything will be fine," laughed Russian fan Roman, referring to England supporters.

With him behind the goal were dozens of muscular, tattooed and mostly young men. The flags of their various fan clubs were draped over the barriers and they chanted and sang furiously throughout the match.

Russia has invested heavily in this tournament, though, and does not want violence to tarnish its global grandstanding.

Roman admitted that he and other hard-core supporters had been called in by police and issued an official warning to behave.

-  Tue Aug 21, 2018 6:21 pm #552165
Looks a tad impractical for the rigours of the modern battlefield to me, but then it's not necessarilly for home consumption. I can see a certain berugged orange dickhead denanding the spunking of millions on an American version. Well played, Vlad.


A close ally of Vladimir Putin has promised to make a “nice juicy steak” out of the opposition leader Alexei Navalny in a bizarre threat posted on the YouTube channel for Russia’s National Guard.

Viktor Zolotov, a former bodyguard to Putin who now heads Rosgvardiya, Russia’s internal military force, challenged Navalny to a duel during a six-minute rant in which he denied corruption allegations made by the opposition leader.

“Nobody has ever given you the spanking you deserve, so hard that you felt it in your liver,” the senior Russian official said in the video, which was posted online on Tuesday.

The Kremlin distanced itself from Zolotov’s words, saying he had not cleared them with the president, but did not censure the Russian general. “You know, sometimes any possible methods should be employed in opposing shameless libel,” Dmitri Peskov, Putin’s spokesman, told reporters on Tuesday. He said he did not see Zolotov’s remarks as a physical threat.

-  Thu Sep 13, 2018 11:19 am #553864
I shouldn't laugh, but Russia's shamelessness really is something else. So two of their guys are suspected of a hit, an accusation that has been supported by the international community. So Putin then parades them on TV and we're told that these two dead-eyed, burly men were in fact simply enthusiastic culture tourists who just wanted to go to Salisbury to see the cathedral: 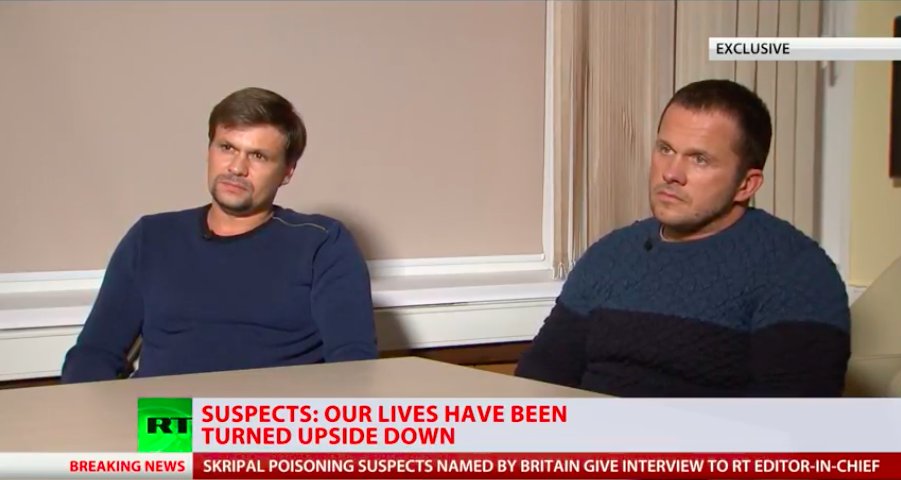 Russia/Putin are taking the absolute piss out of anyone who calls them out, as usual.

I too love the idea these guys wanted to visit Salisbury so much they went the day after arriving in the UK... but without checking the weather forecast, or how far Stonehenge was from the town... and then went back the next day, so keen were they to see the cathedral!