It's a long way from Beijing to Belgravia but London's upmarket estate agents would be well advised to keep a close eye on developments in China over the next 10 days. The price of a mansion in London's more fashionable districts is rising fast. Cash buyers from overseas have snapped up houses with little or no regard of the cost, creating a property microclimate divorced from the rest of the market.

The Bank of England is keeping tabs on the boom, concerned that the flood of foreign cash pushing up the price of mansions could – if left unchecked – herald the start of the next bubble.

Well, you ain't seen nothing yet. The freeing up of China's economy over the past 35 years has been methodical. First it was agriculture. Then it was industry. Now, the next phase of liberalisation planned by the ruling cadre of the Communist party includes finance.

A host of possible reforms are being considered. These include offering higher interest rates for domestic savers backed up by deposit insurance for savings accounts and making China's currency, the renminbi, convertible.

Unfettered movement of capital out of China is not going to happen overnight, but it could happen within five to 10 years. That's why George Osborne was in China last month seeking to make London the global hub for dealings in the renminbi. That is why fund managers, hedge funds, private equity firms and property specialists in Britain are licking their lips.

I for one don't see how this could possibly end badly.
Change does not roll in on the wheels of inevitability, but comes through continuous struggle.

-  Mon Nov 04, 2013 11:54 pm #344499
Some would say it's time that the Chinese economy bears the same Handicaps as ours.
The educated differ from the uneducated as much as the living from the dead. Aristotle


But what makes much of the spending and investment toxic is the way it was financed: there has been an explosion of lending. China's debts as a share of GDP have been rising at a very rapid rate of around 15% of GDP, or national output, annually and have increased since 2008 from around 125% of GDP to 200%.

The analyst Charlene Chu, late of Fitch, gave a resonant synoptic description of this credit binge:

"Most people are aware we've had a credit boom in China but they don't know the scale. At the beginning of all of this in 2008, the Chinese banking sector was roughly $10 trillion in size. Right now it's in the order of $24 to $25 trillion.

"That incremental increase of $14 to $15 trillion is the equivalent of the entire size of the US commercial banking sector, which took more than a century to build. So that means China will have replicated the entire US system in the span of half a decade."

Anyone living in the rich West does not need a lecture on the perils of a financial system that creates too much credit too quickly. And in China's case, as was dangerously true in ours, a good deal of the debt is hidden, in specially created, opaque and largely financial institutions which we've come to call "shadow" banks.

There are no exceptions to the lessons of financial history: lending at that rate leads to debtors unable to meet their obligations, and to large losses for creditors; the question is not whether this will happen but when, and on what scale.

http://www.bbc.co.uk/news/business-26225205" onclick="window.open(this.href);return false;
Change does not roll in on the wheels of inevitability, but comes through continuous struggle.

-  Wed Apr 09, 2014 2:11 pm #366350
Could be big problems ahead for China. The CCP has to strike the right balance between reining in credit expansion and maintaining GDP growth - not easy by any stretch of the imagination. Up to now, whenever there have been signs of a slowdown Beijing has panicked and unleashed major investment on infrastructure. It might not do so in future.


China's economy lost momentum in the first quarter and growth in 2014 could fall short of the government's official target, according to a CNNMoney survey of economists.

Gross domestic product is forecast to have grown by 7.3% in the first quarter, compared with the same period a year ago, according to the median of 12 estimates. Looking ahead, the economists surveyed also expect full-year growth to slow to 7.3%, below the official target of 7.5%.

http://money.cnn.com/2014/04/08/news/ec ... index.html" onclick="window.open(this.href);return false;
Change does not roll in on the wheels of inevitability, but comes through continuous struggle. 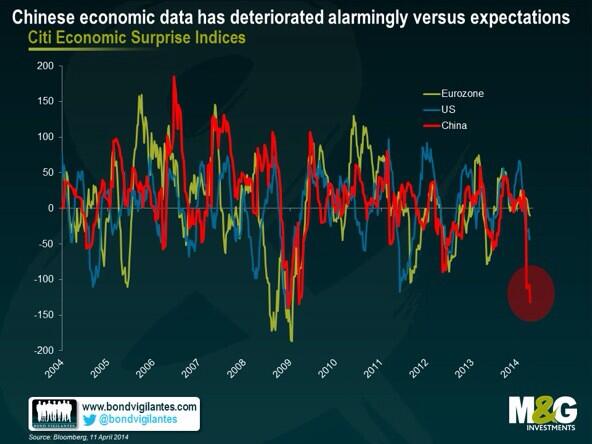 
Chinese property is the most important sector in the global economy. It has been pivotal in the country’s economic development, provided lucrative business for industrial commodity producers from Perth to Peru, and been the backbone of the surge in world exports to China. In the past few years, predictions that the sector was about to implode at any moment have not been borne out – but now is the time for the world to pay attention. Property activity indicators have been trending lower since mid-2013, and the downturn in the sector now threatens to turn into a bust. At best, China is entering a deflationary phase at a time of global fragility.

http://www.ft.com/cms/s/0/6cd98926-d9e1 ... z31aPBuFQY" onclick="window.open(this.href);return false;
Change does not roll in on the wheels of inevitability, but comes through continuous struggle.


China's authorities are becoming increasingly nervous as the country’s property market flirts with full-blown bust, threatening to set off a sharp economic slowdown and a worrying erosion of tax revenues.

New housing starts fell by 15pc in April from a year earlier, with effects rippling through the steel and cement industries. The growth of industrial production slipped yet again to 8.7pc and has been almost flat in recent months. Land sales fell by 20pc, eating into government income. The Chinese state depends on land sales and property taxes to fund 39pc of total revenues.

“We really think this year is a tipping point for the industry,” Wang Yan, from Hong Kong brokers CLSA, told Caixin magazine. “From 2013 to 2020, we expect the sales volume of the country’s property market to shrink by 36pc. They can keep on building but no one will buy.”

The Chinese central bank has ordered 15 commercial banks to boost loans to first-time buyers and “expedite the approval and disbursement of mortgage loans”, the latest sign that it is backing away from monetary tightening.

The authorities are now in an analogous position to Western central banks following years of stimulus: reliant on an asset boom to keep growth going. Each attempt to rein in China’s $25 trillion credit bubble seems to trigger wider tremors, and soon has to be reversed.

http://www.telegraph.co.uk/finance/chin ... onomy.html" onclick="window.open(this.href);return false;
Change does not roll in on the wheels of inevitability, but comes through continuous struggle.

-  Wed Aug 12, 2015 9:01 pm #424394
This explosion looks absolutely horrendous. If there really is only double figure fatalities it will be a miracle. But it looks like it has damaged/destroyed a large swathe of the city.
Fracking will incur imprisonment.

-  Wed Aug 12, 2015 10:00 pm #424412
Huge explosions in container port south of Bejing. Appears to be an accident in an explosives storage facility. Death toll at thirteen and likely to rise.

Xu Zhangrun says culture of suppression and ‘systemic impotence’ have created the crisis that has killed more than 1,000 people


A prominent Chinese intellectual has become the first high-profile public figure to lay the blame for the coronavirus crisis at the feet of the country’s leader, Xi Jinping, saying the spread of the deadly virus has “revealed the rotten core of Chinese governance”.

As the crisis expands across the country, Xu Zhangrun, a law professor from one of the country’s top universities, lambasted the government under Xi in an essay titled: Viral Alarm, When Fury Overcomes Fear. In it, Xu blamed the current national crisis on a culture of suppression and “systemic impotence” that Xi has created. The virus has now killed more than 1,000 people inside China.

“The cause of all of this lies with The Axelrod and the cabal that surrounds him,” Xu writes, referring to Xi, according to a translation of the article by historian Geremie Barmé published on Monday by the website ChinaFile.


When China imposed trade sanctions on Norway in 2010 for honouring the imprisoned dissident Liu Xiaobo with the Nobel peace prize, it spat out a word we weren’t used to hearing from propagandists for an atheist communist regime, but should get used to today. “It’s a blasphemy,” a party mouthpiece said.

Once, blasphemy was damning the faithful’s gods and sacred books. Now, criticism of the world’s largest dictatorship has become sacrilegious. You shouldn’t be surprised. As some of us tried to say in the 1990s and 2000s, the gap between the sacred and the profane was never as wide as religious sentimentalists and liberal multiculturalists believed.

They went along with the argument that it was bad taste at best and racism at worst to offend believers. You were “punching down” at largely poor and largely Muslim communities. We thought they were being wilfully blind. They did not understand how men with real power and malice were manipulating religious outrage to consolidate their rule over their wretched population. Iran issued a death sentence on Salman Rushdie in 1989 for satirising Islam’s foundation myths in The Satanic Verses. Its theocratic dictator, Ayatollah Khomeini, was augmenting his powers by claiming to speak for the Muslim world, as well as taking aim at novelists. When the Danish newspaper Jyllands-Posten published largely innocuous cartoons of Muhammad in 2005, to assert the right to mock religion, the Egyptian and Syrian dictators, Hosni Mubarak and Bashar al-Assad, turned a local argument into a global campaign against Denmark. The cries of rage usefully distracted from their corruption and misrule. I could add further examples but they tell the same story. Authoritarian politics and authoritarian religion are just two sides of the same debased coin.