I've never been one to be pro-military engagement, but these people really are a cancer on humanity.
Soppy anti-British, pro-crime, anti-education, pro-immigration, anti-family nonentity

Look before you leap especially if you think you're self important and those bastards deserve it.

-  Sun Sep 14, 2014 9:06 pm #385647
To be fair, the whole point of arming these lunatics (and simultaneously turning a blind eye to the fact that they were lunatics) in the first place was to help remove an Iran-friendly regime in Damascus. This is at least in part due to Saudi pressure - the Sunni autocracy in Saudi is completely paranoid about perceived Shia expansionism (Iran being a Shia-dominated country). This is despite the fact that the Shia constitute a numerical majority in something like four out of 57 Islamic countries. But while both the Saudi despots and IS are predominantly Sunni - and the former has funded the latter in lavish style - IS has little love for any of the Gulf monarchies.

Anyway, here's the latest from Patrick Cockburn (who suggests the US may not be telling the whole truth about its stance on Assad).


The new Iraqi government under Prime Minister Haider al-Abadi remains sectarian, with even more members of the ruling Shia Dawa party than before. The Kurds were press-ganged by the US into joining it though none of their outstanding demands has been satisfied.

In Syria, the US is to bolster the “moderate” Syrian rebels who are to be trained in Saudi Arabia. The Syrian military opposition on the ground is dominated by jihadis, of which Isis, with control of 35 per cent of the country, is the most powerful.

The US air power should be enough to prevent Isis capturing the Kurdish capital Irbil or launching a successful assault on Baghdad. It might also be employed to save Aleppo or Hama from Isis. But without American forward air observers embedded in Iraqi units, as happened in Afghanistan in 2001 and Iraqi Kurdistan in 2003, the Iraqi army is unlikely to make real progress on the ground. Given that the Sunni community is likely to fight the Shia-dominated army to the last man or flee in front of it, this may be no bad thing.

http://www.independent.co.uk/news/world ... 27847.html" onclick="window.open(this.href);return false;
Change does not roll in on the wheels of inevitability, but comes through continuous struggle. 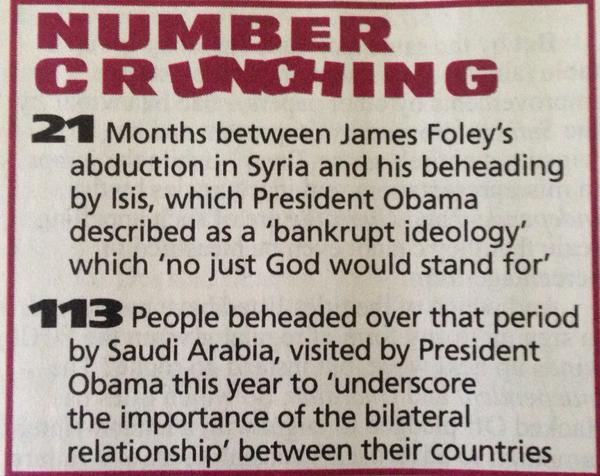 At least one of those beheaded in Saudi was executed for 'sorcery'. So who's going to be training our 'moderate' rebel friends? Er, Saudi Arabia!


AMMAN, Jordan — Saudi Arabia has agreed to an American request to provide a base to train moderate Syrian opposition fighters, American officials said on Wednesday.

“We now have the commitment from the Kingdom of Saudi Arabia to be a full partner in this effort — the train-and-equip program — to host that program,” said a senior Obama administration official, who added that discussions were underway to determine the specific site and other details.

The Saudi willingness to host a training program comes as Secretary of State John Kerry is preparing to fly to Jidda, Saudi Arabia, on Thursday morning for a high-level strategy session on how to counter the Islamic State in Iraq and Syria.

http://www.nytimes.com/2014/09/11/world ... -isis.html" onclick="window.open(this.href);return false;
Change does not roll in on the wheels of inevitability, but comes through continuous struggle.


The US defense secretary told senators on Tuesday that America is “at war” with the Islamic State (Isis), while the senior US military officer suggested US ground troops might directly join Iraqis in combat.

Stripping away an earlier reluctance by the Obama administration to declare its airstrikes against Isis a full-blown war, Pentagon chief Chuck Hagel said Isis will “directly threaten our homeland and our allies” unless the US confronts the jihadist army militarily.

http://www.theguardian.com/world/2014/s ... ess-combat" onclick="window.open(this.href);return false;
Change does not roll in on the wheels of inevitability, but comes through continuous struggle.

Hard to know whether this would have actually happened or not, get fifteen dickheads together and the resulting gobshitery can be terrifying. Likewise, hard to know if this was authorised by Al-Bigdaddy or not.

Given their apparent determination to goad the west into a fight, I suppose something like this was inevitable.
Soppy anti-British, pro-crime, anti-education, pro-immigration, anti-family nonentity


2. There are hundreds of guerrilla groups fighting in Syria. Some of them have given fealty to the the so-called Islamic State. Others have joined a rival organization that is more Salafi in coloration, the Islamic Front (strong in Aleppo). The National Coalition and the Free Syrian Army are yet another force, heavily dominated by the Muslim Brotherhood and now much weakened. So if Obama agreed with al-Sisi to pursue a global ‘war on terrorism’ together, he would be in the difficult position of opposing the Free Syrian Army and of agreeing to help crush the Syrian Muslim Brotherhood– among the major opposition groups to both ISIL and the Baath regime in Damascus.

3. That is, Obama’s desire to support a “moderate” opposition will lead him to back to the Muslim Brotherhood of Syria. But Saudi Arabia, one of Obama’s major partners, has declared the Muslim Brotherhood as a terrorist organization, and they have the money to make that stick. With Egypt and Saudi Arabia against the National Coalition and the Free Syrian Army (because of their Muslim Brotherhood ties), Obama by allying with them is basically allying with the murky Islamic Front, which has some al-Qaeda elements and now has turned openly anti-democracy and anti-rights for minorities.

4. Saudi Arabia will provide training camps for the rebels of the “moderate” opposition. But it is rumored that the Saudis are behind the splinter group from the Free Syrian army, the “Islamic Front.” It rejects democratic elections. The Islamic Front is full of people who have continued to have rigid religious views but who are trying to find new allies. The Saudis will be training people, in other words, very much like the Islamic State fighters in their fundamentalism, but who are less hostile to Saudi Arabia and perhaps slightly less openly brutal. That’s a “moderate” Sunni opposition?

http://www.juancole.com/2014/09/contrad ... ategy.html" onclick="window.open(this.href);return false;
Change does not roll in on the wheels of inevitability, but comes through continuous struggle.

I was just wondering about this line:


The video, which has not been independently verified, has been reported by other news organisations, but MailOnline has chosen not to identify the hostage or what he says.

Does that just mean they haven't got their hands on it, or are they genuinely taking the moral high ground on this one? I'm sure they've used screenshots of previous videos without any hesitation at all?

Daley Mayle wrote:It was a mistake not to include Iran IMO.

Iran have included themselves.

The Shia militias around Baghdad have saved the West from further embarrassment.

Moreover, the new overlords of Tripoli are allies of Ansar al-Sharia, a brutal jihadist movement suspected of killing America's then ambassador to Libya, Christopher Stevens, and of trying to murder his British counterpart, Sir Dominic Asquith.

Barely three years after Britain helped to free Libya from Col Gaddafi's tyranny, anti-Western radicals hold sway. How could Britain's goal of a stable and friendly Libya have been thwarted so completely?

Step forward a fabulously wealthy Gulf state that owns an array of London landmarks and claims to be one of our best friends in the Middle East.

Qatar's investment in Britain is so extensive, and the Foreign Office is so anxious to win its favour, that some question whether UK diplomats will have the resolve to ask robust questions. "If diplomats are focused on winning commercial contracts, there is a danger they will be reluctant to ask tough questions on the funding of unsavoury groups," said Mr Barclay.

Meanwhile, here's the latest from Cockburn.


The Syrian government was forewarned of the impending air strikes on Monday night in a message sent by Samantha Power, the US ambassador to the UN, with the Iraqi Foreign Minister, Ibrahim al-Jaafari, acting as an intermediary.

The Syrian government says that “it stands with any international effort to fight terrorism” whether it is Isis, Jabhat al-Nusra or anybody else.

Washington has little option during a prolonged air campaign but to have some co-ordination with those fighting Isis on the ground: the Syrian army, Hezbollah of Lebanon and the Syrian Kurds. Otherwise the US would have to avoid attacking Isis when the extremist group is battling any of these forces.

Though air strikes will inflict casualties on Isis in Syria and Iraq, they will not be enough to defeat the group and may not even contain it. Much will depend on how far the US is prepared to give tactical support to those fighting Isis on the ground in Syria.

These are mostly organisations of whom the US government disapproves or regards as terrorists, such as Hezbollah and the Syrian Kurds besieged by Isis at Kobani, also known as Ayn al-Arab, in northern Syria. The Kurdish militia defending the town belong to the YPG, which is part of the PKK Turkish party that the US has labelled as terrorist.

In the past Isis has retaliated violently after any action against it so its opponents will be bracing themselves for a similar reaction.

http://www.independent.co.uk/news/world ... 51912.html" onclick="window.open(this.href);return false;
Change does not roll in on the wheels of inevitability, but comes through continuous struggle.