The prime minister said the king would be remembered for his "commitment to peace and for strengthening understanding between faiths".

Foreign Secretary Philip Hammond said the monarch had served his country with "great dignity and dedication".

-  Fri Jan 23, 2015 10:58 am #400579
Good to see the entire ruling class in unashamed bullshitting shill mode today. Presumably those women who were put to death for adultery were stoned by moderate stones.


The head of the International Monetary Fund, Christine Lagarde, who is currently in Davos for the World Economic Forum, said it was too early to say how his death would impact the global economy.

She said that although Saudi Arabia had often been portrayed as diminishing women's role, she hailed King Abdullah as a "strong advocate of women".

http://www.channel4.com/news/saudi-arab ... es-aged-90" onclick="window.open(this.href);return false;
Change does not roll in on the wheels of inevitability, but comes through continuous struggle.


It is with great regret that we learn of the death of the King Abdullah bin Abdulaziz, King of Saudi Arabia.

It is requested that all flags be half-masted from 8am today until 8pm this evening.

Any other UK national flags flown alongside the Union Flag when it is at half-mast should also be at half-mast. If a flag of a foreign nation is normally flown on the same stand as the Union Flag, it should be removed.

Local authorities are not bound by this request but may wish to follow it for guidance. Devolved administrations are responsible for issuing instructions for the flying of the Union Flag on buildings in their estate and others as necessary.

https://www.gov.uk/government/news/half ... udi-arabia" onclick="window.open(this.href);return false;
Change does not roll in on the wheels of inevitability, but comes through continuous struggle.

-  Fri Jan 23, 2015 1:11 pm #400598
Its the lack of ambiguity in their fawning to this vile regime that makes it even worse. From people who would be first to tell us that diplomacy is full of ambiguity and nuance. Would they reserve the same level of grovelling to the leader of a secular one party state in the Middle East?

The scale of the state's outpouring of grief surprises me. Our flags are at half mast for a man whose country is (maybe even right this moment) publically flogging a man on a weekly basis for things he posted online.

Esqui wrote: Our flags are at half mast for a man whose country is (maybe even right this moment) publically flogging a man on a weekly basis for things he posted online.

I thought that was a joke for a minute 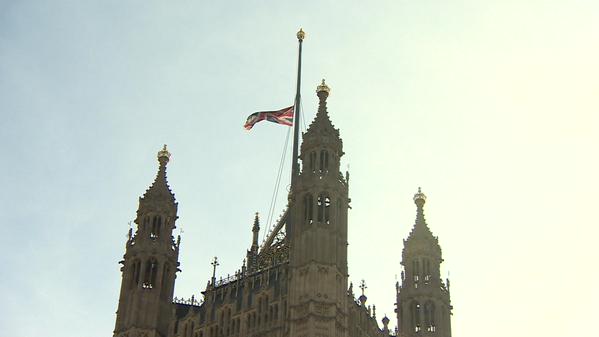 
Paul Twinn ‏@PaulTwinn · 15m15 minutes ago
.@LouiseMensch DCMS say the decision was made by Buckingham Palace. So the Queen then.


UKinSaudiArabia ‏@UKinSaudiArabia 4h4 hours ago
PM David Cameron: My thoughts and prayers are with the #Saudi Royal Family and the people of the Kingdom at this sad timehttp://ow.ly/HOfaB" onclick="window.open(this.href);return false;

‏@LouiseMensch
Let me be straight. Cameron, Miliband and Clegg can't ask Muslims living in Britain to "respect our values" as they abandoned them today

Carswell said the “Sir Humphreys who run British foreign policy” were to blame for the tribute and that they were out of touch with public feeling.

“It is an extraordinary misjudgement by the out-of-touch elite in Whitehall who think it is appropriate to do this,” he said.

As the saying goes, if that's where you want to be you shouldn't be starting from here.
Mene, mene tekel upharsin, Johnson.

I agree that it was to be expected but that only signifies the level of hypocrisy that exists.

Nothing will change in Saudi while we are addicted to their cheap oil.

There are ways and means to object. It's a satel[…]

And equally the SNP have to explain why leaving t[…]

None of this lot would have made it further than M[…]