Ha! Nice one, your Duchessness.

Also, top trolling by Brenda who gave Trump a book on how to combat Nazism.

Tinkety tonk old fruit, and down with the Nazis. - as her mum used to say.
The educated differ from the uneducated as much as the living from the dead. Aristotle

Looks like a lot of no-shows among the adoring public.

How will he spin this?
"Frightened off by the terrorists / knifecriming".

Interesting use of pre-revolution Iranian flags, too. Angling for a little of the ol' regime change, are we?

The main ‘crowd’ was actually the queue for the war rooms.

Wondering whether Trump brought his own tumbleweeds.
Do they have a compartment on Airforce One, or their own private jet?
The educated differ from the uneducated as much as the living from the dead. Aristotle 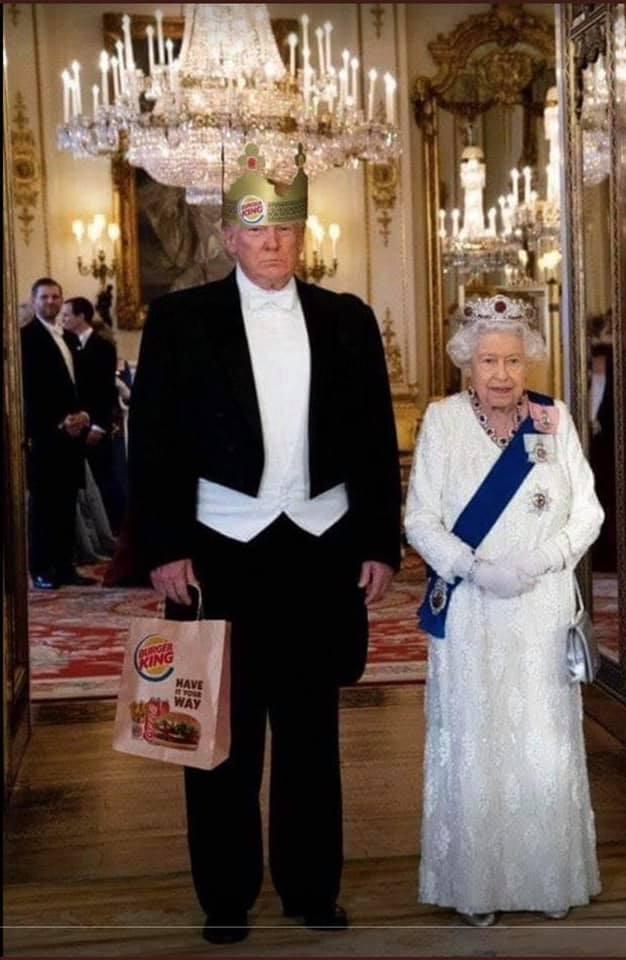 Oblomov, Cyclist, Arrowhead liked this
There will be no Tomb of the Unknown Shelf-Stacker.

May says she still thinks it is in the best interests of the UK to leave the EU with a deal.

It will be for whoever succeeds her to take this forward.

She says Trump advised her to sue. She decided not to. She negotiated and got a good deal.

Sue? Sue who? On what grounds?

On the subject of the protests, Trump says there were “thousands of people” on the streets cheering him yesterday. And again today.

He says he did not see protesters yesterday.

He says he saw some today, but it was a very small group.

The reports of the protests have been “fake news”.

Trump claims “thousands” of people have been on the streets in London cheering him. (This is not true.)

Corbyn has been critical of him, he says. He says he does not like people who are critical.

We already knew that. Not like Trump to admit his character flaws.


https://www.theguardian.com/politics/li ... -live-news
They fuck you up your mum and dad,
But not as much as Brexit will.

-  Tue Jun 04, 2019 2:59 pm #576892
You know, it's crossed my mind that it's possible that Trump might be putting on all this dimwitted racist, sexist, narcissist stuff just for shits and giggles and to take a rise out of everybody. His behaviour is often so outrageous that this could seem eminently possible.

However, I think it's no act. He really is the worst human being on the planet, and he's deadly serious about what he is trying to do.

Someone called Nate White on Fleecebook posted the following, which I think is rather excellent.


A few things spring to mind.

For instance, he has no class, no charm, no coolness, no credibility, no compassion, no wit, no warmth, no wisdom, no subtlety, no sensitivity, no self-awareness, no humility, no honour and no grace - all qualities, funnily enough, with which his predecessor Mr. Obama was generously blessed.

So for us, the stark contrast does rather throw Trump’s limitations into embarrassingly sharp relief.

Plus, we like a laugh. And while Trump may be laughable, he has never once said anything wry, witty or even faintly amusing - not once, ever.

I don’t say that rhetorically, I mean it quite literally: not once, not ever. And that fact is particularly disturbing to the British sensibility - for us, to lack humour is almost inhuman.

But with Trump, it’s a fact. He doesn’t even seem to understand what a joke is - his idea of a joke is a crass comment, an illiterate insult, a casual act of cruelty.

Trump is a troll. And like all trolls, he is never funny and he never laughs; he only crows or jeers.

And scarily, he doesn’t just talk in crude, witless insults - he actually thinks in them. His mind is a simple bot-like algorithm of petty prejudices and knee-jerk nastiness.

There is never any under-layer of irony, complexity, nuance or depth. It’s all surface.

Well, we don’t. We see it as having no inner world, no soul.

And in Britain we traditionally side with David, not Goliath. All our heroes are plucky underdogs: Robin Hood, Dick Whittington, Oliver Twist.

Trump is neither plucky, nor an underdog. He is the exact opposite of that.

He’s not even a spoiled rich-boy, or a greedy fat-cat.

He’s more a fat white slug. A Jabba the Hutt of privilege.

And worse, he is that most unforgivable of all things to the British: a bully.

That is, except when he is among bullies; then he suddenly transforms into a snivelling sidekick instead.

There are unspoken rules to this stuff - the Queensberry rules of basic decency - and he breaks them all. He punches downwards - which a gentleman should, would, could never do - and every blow he aims is below the belt. He particularly likes to kick the vulnerable or voiceless - and he kicks them when they are down.

So the fact that a significant minority - perhaps a third - of Americans look at what he does, listen to what he says, and then think 'Yeah, he seems like my kind of guy’ is a matter of some confusion and no little distress to British people, given that:
* Americans are supposed to be nicer than us, and mostly are.
* You don't need a particularly keen eye for detail to spot a few flaws in the man.

This last point is what especially confuses and dismays British people, and many other people too; his faults seem pretty bloody hard to miss.

After all, it’s impossible to read a single tweet, or hear him speak a sentence or two, without staring deep into the abyss. He turns being artless into an art form; he is a Picasso of pettiness; a Shakespeare of shit. His faults are fractal: even his flaws have flaws, and so on ad infinitum.

God knows there have always been stupid people in the world, and plenty of nasty people too. But rarely has stupidity been so nasty, or nastiness so stupid.

In fact, if Frankenstein decided to make a monster assembled entirely from human flaws - he would make a Trump.

And a remorseful Doctor Frankenstein would clutch out big clumpfuls of hair and scream in anguish:

If being a twat was a TV show, Trump would be the boxed set.

Cyclist liked this
"The opportunity to serve our country. That is all we ask." John Smith, Leader of the Labour Party, 10 May 1994.
Others?

-  Tue Jun 04, 2019 3:37 pm #576899
Looking at the pic a few posts above, I didn't know they did tuxedos in maternity sizes?
"Unsubstantiated opinions, speeches, empty rhetoric and a bogus historical parallel [to the Nazis] are not a substitute for facts."
Mr. Justice Meenan, Irish High Court, 13th May 2020.

Malcolm Armsteen wrote: ↑
Tue Jun 04, 2019 2:47 pm
Trump really believes it's the same as negotiating a deal to lay some concrete.

He's part of a large group:
* Most of the question Time audience.
* 11 Tory leadership candidates.
* A majority of tabloid columnists.
The educated differ from the uneducated as much as the living from the dead. Aristotle

...we can all sleep safely in our beds knowing Matt's on the case, eh, kids?
There will be no Tomb of the Unknown Shelf-Stacker.

youngian wrote: ↑
Tue Jun 04, 2019 1:52 pm
Among the highlights of Trump's car crash press conference is claiming not have heard of Michael (Gove).

Didn't Gove interview him (with Murdoch in tow)?
"I've tried to think of something clever to say about Rod Liddle, but I think he's just a cunt."

youngian wrote: ↑
Tue Jun 04, 2019 1:52 pm
Among the highlights of Trump's car crash press conference is claiming not have heard of Michael (Gove).

Didn't Gove interview him (with Murdoch in tow)?

Yes, but, such is his charisma, every time Gove walks in to a room, you think that two people just left.
Bones McCoy liked this
Jack believed in the inherent goodness of humanity, and felt a deep social responsibility to protect that. Through us all, Jack marches on.
Others?

Par for the bloody course.

Also, any British Trump fan needs a good seeing to. Fuck me, what an absolute state you have to be to admire that man.

...we can all sleep safely in our beds knowing Matt's on the case, eh, kids?

It's a good thing he's a dead cert for leader.
The educated differ from the uneducated as much as the living from the dead. Aristotle

Well, the headline says one thing and the story cl[…]

The Mail's come out strongly against. Wonder […]

For those who don't follow the old football, there[…]

The Sky one was great “If I were Prime Minis[…]