"Go fuck yourself America"
"Unsubstantiated opinions, speeches, empty rhetoric and a bogus historical parallel [to the Nazis] are not a substitute for facts."
Mr. Justice Meenan, Irish High Court, 13th May 2020.


Maybe we’re too busy laughing to see it. Perhaps it’s the jokes and memes that Donald Trump generates in abundance, the gift that keeps on giving, that blinds us to a chilling fact that we’d rather not face. Put simply, the leader of the world’s most powerful nation is behaving like an authoritarian dictator, one who threatens democracy in his own country and far beyond.

Here’s the latest example of how the comedy can distract. On Thursday Donald Trump marked the Fourth of July by praising the US military, invoking the heroism of an army that defeated the British in the 18th century in part because “it took over the airports”. Lol: behold, the ignoramus president. Cue more chuckles as Trump delivered that speech during a downpour, the Almighty himself apparently deciding to rain on Trump’s parade.

But all those giggles served to obscure the more pressing fact: that in a departure from all precedent, Trump had used Independence Day to stage a military display, in which M1A2 tanks and Bradley armoured vehicles rolled into Washington, while fighter jets and helicopters filled the sky. The generals, mindful of the need to separate military and political power, had long opposed this extravaganza and, tellingly, most of the joint chiefs contrived to stay away. They understood that such a pageant is the stuff of despots, not democrats.

Another image framed this split-screen 4 July: that of the children, separated from their parents, who are caged in detention camps on America’s southern border. Accounts by lawyers and doctors who were allowed brief visits to these hellish places are almost unbearable to read: children deprived of sleep, denied access to blankets or mattresses, not allowed to wash their hands or brush their teeth; toddlers left alone on cold, hard floors, so traumatised they sit in stunned, tearless silence. I’m especially haunted by the report of “a suicidal four-year-old whose face was covered in bloody, self-inflicted scratches”.

This too is what dictators do: demonising a group – in this case, migrants – as an alien threat, an army of invaders, so intensely and for so long that eventually any fate, no matter how brutal or inhumane, seems deserved, even when it is inflicted on that group’s youngest and most vulnerable members. Breaking up families, caging children in hot, fetid, disease-ridden camps – this is what dictators do.

The Red Arrow is currently appearing in 'Ride Me Like Piggot'' at The Kings Theatre, Newmarket.
Others?

Asked about the controversy in New Jersey by reporters on Sunday night, Trump said: “The ambassador has not served the UK well, I can tell you that. We are not big fans of that man … I can say things about him, but I won’t bother.”

That's not a denial of the claims, is it?

https://www.theguardian.com/politics/20 ... s-on-trump
They fuck you up your mum and dad,
But not as much as Brexit will.

“Terrific guy. He’s a lot of fun to be with it. It is even said that he likes beautiful women as much as I do and many of them are on the younger side,”

Why do I sense another "I don't know him, I've never met him" from Wotsit Hitler coming real soon? This is going to get very murky indeed...


Christine Pelosi warns Democrats: 'Some of our faves' may be implicated in Epstein scandal

https://www.washingtontimes.com/news/20 ... -faves-ma/
The Red Arrow is currently appearing in 'Ride Me Like Piggot'' at The Kings Theatre, Newmarket.

"Whoever did this has behaved in a very unprofessional, very unethical and very unpatriotic way."

The brass neck of these tossers.
The Red Arrow is currently appearing in 'Ride Me Like Piggot'' at The Kings Theatre, Newmarket.

He seemed to be auditioning for any vacant job that might come up.
"It is the duty of a newspaper to comfort the afflicted and afflict the comfortable."

These are truly dark times if scumbags like this can appoint themselves to positions of power and influence.
The Red Arrow is currently appearing in 'Ride Me Like Piggot'' at The Kings Theatre, Newmarket. 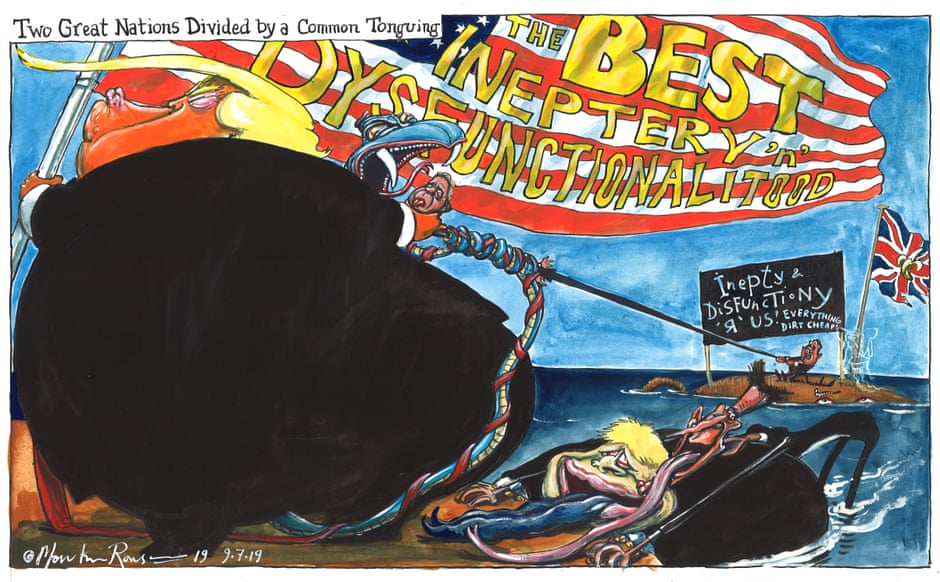 The embassy leak will damage far more than the special relationship

Washington ambassador Kim Darroch did nothing wrong. But the episode has undermined trust within the Foreign Office

https://www.theguardian.com/commentisfr ... ign-office
The Red Arrow is currently appearing in 'Ride Me Like Piggot'' at The Kings Theatre, Newmarket.

Did Mexico pay for it? Much mirth in Klein thre[…]