He's got effectively one of the safest MEP seats in Britain thanks to being the number one list candidate for the Tories in arguably the most Conservative friendly election region which also has the highest amount of seats available compared to other regions. He can spout pretty much any bollix he wants and he'll still get in.

Would be interesting if the MEP seats in England were determined by STV, would likely still get elected especially if SE England remained a 10 seater which would set the quota quite low but it would actually show up what kind of a personal mandate he'd actually have away from the comfort blanket that is a closed party list.
Currently listening to "French Kiss" (12 inch version) by Lil Louis

I’m pretty sure she’s a Lexiter. If so, no great loss whatsoever.
oboogie, WTF? liked this
"Patience is bitter, but its fruit is sweet" - Jean-Jacques Rousseau

Goodwin must be devastated.
Don't give me the Star Trek crap. it's too early in the morning.

Seems about deadlocked between Leave and Remain aligned parties.


Meanwhile our continental siblings have swung to Green and the Fascists are winning little beyond a sore pair of bollocks.
The educated differ from the uneducated as much as the living from the dead. Aristotle


Green parties have swept to their strongest ever showing in European elections, boosting their tally of MEPs to a projected 71 compared with 52 last time. The result gives them every chance of becoming kingmakers in a newly fragmented parliament.

“Thank you so much for your trust in us Greens,” a delighted Ska Keller, one of the European Greens’ two lead candidates for the post of European commission president, told a press conference in Brussels.

“This is a mandate for real change: for climate protection, a social Europe, more democracy and stronger rule of law.” Above all, Keller said, the Greens “want to achieve climate action now – because if we wait any longer, it will be a disaster”.

Arrowhead liked this
Don't give me the Star Trek crap. it's too early in the morning.

-  Mon May 27, 2019 5:56 am #576110
BP’s vote was about the same as UKIP’s last time with far more Tory votes bolstering them this time. The overall vote was about 55% Lab/Remain but what does the low turnout tells us? Usually it benefits Brexiters.

Anti-Brexit parties - those in favour of another referendum - collectively took about 40% of the vote, compared with 35% for the two parties in favour of leaving the EU without a deal.

If Labour became pro-Remain there is no doubt at all in the result of a 2nd Referendum.

Farage wants a GE. Hang on, Nige, didn't the public vote two years ago on that?? If the "will of the people" has has to be obeyed from a vote 3 years ago....... So you accept people CAN change their minds?

I can't speak for others on here, but from my perspective last night's results achieved exactly what I wanted i.e. a sharp kick to the nethers for Labour.

It's entirely up to Labour now as to how they respond to this.
"Patience is bitter, but its fruit is sweet" - Jean-Jacques Rousseau

I've kicked a coupleofweegiecuntsinthebawsovertheyearsifthatsanyusetoyou, you know what I mean, Erin go bragh!

You stick that £100 on your tail. I might turn up on your doorstep some of these days looking for a bed.
Others?

That's pretty much how I see it. Is that the general consensus down south, yes?

That's pretty much how I see it. Is that the general consensus down south, yes?

And right on cue, McDonnell has just expressed his support for a confirmatory vote. Lazy night is already having the desired effect, it seems

WTF? liked this
"Patience is bitter, but its fruit is sweet" - Jean-Jacques Rousseau

-  Mon May 27, 2019 9:07 am #576120
Not a good 70th birthday party for Jezza: Second place in London, third in Wales with PC overtaking them in the first election ever, single figures in Scotland and a total UK share of the vote 15% must be the direst result Labour have ever delivered.

Couldn't even beat the Brexit Party in Cambridge 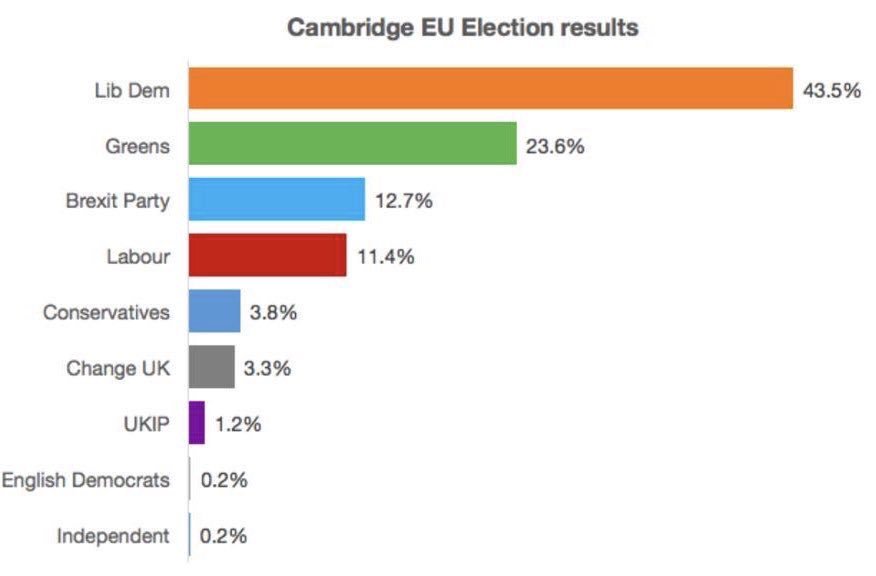