The BBC complains to Facebook and Google about inappropriate use of its footage in Tory adverts - and gets listened to.

Tubby Isaacs wrote: ↑
Mon Dec 02, 2019 12:01 pm
But not sure about the focus on season tickets. It's obvious these are expensive but the peak time trains are already full. Where is the extra capacity? And in terms of progressiveness, season ticket holders are (generally) a fairly wealthy group, heavily concentrated in the South East, so this is is effectively a subsidy to the South East.

I think a lot of it is about the way you can play the numbers. For example (and pulling figures entirely from my arse on this), it's a lot easier to claim ticket prices are too high when you can say "it's costs £7,500 to travel from Guildford to London!" (because it's a lot of money) than it would be to claim "it's awful that the cost of a ticket from Dartford to Sevenoaks costs £16.20".

Probably right. And season ticket prices are, like council tax bills, something that hit you with a big number all at once.

It's voting based purely on each parties policies, but the parties are anonymous until the end so technically you don't know which party you're choosing for each policy, although admittedly it's sometimes quite obvious.

Takes a good 20 mins or so if you've ticked all policies at the start:

My Results, which wasn't too much of a surprise:

-  Tue Dec 03, 2019 12:13 pm #591983
Interesting in that it reinforces my belief that the Greens being given saturation coverage by the media like UKIP was would have made us a happier nation, and that Brexshit are blatantly lying. The local/national results are interesting - from that, we really need electoral reform. 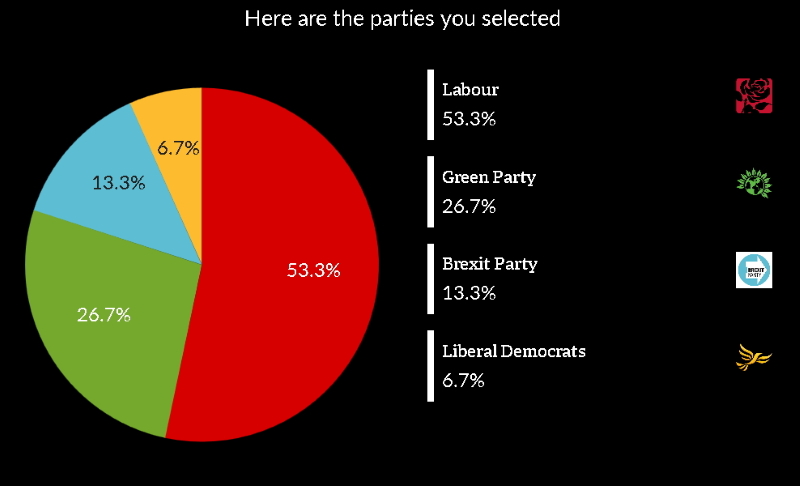 
Meanwhile, a lesson in sincerity from Ol' Bollockchops himself.

-  Tue Dec 03, 2019 2:03 pm #592008
Over to West Bromwich East where Gorgeous George is standing in WBA colours. "We can sign our own trade deals with Venezuela and Syria," Mr Brexit explains to racist gammons who don't give a fuck. 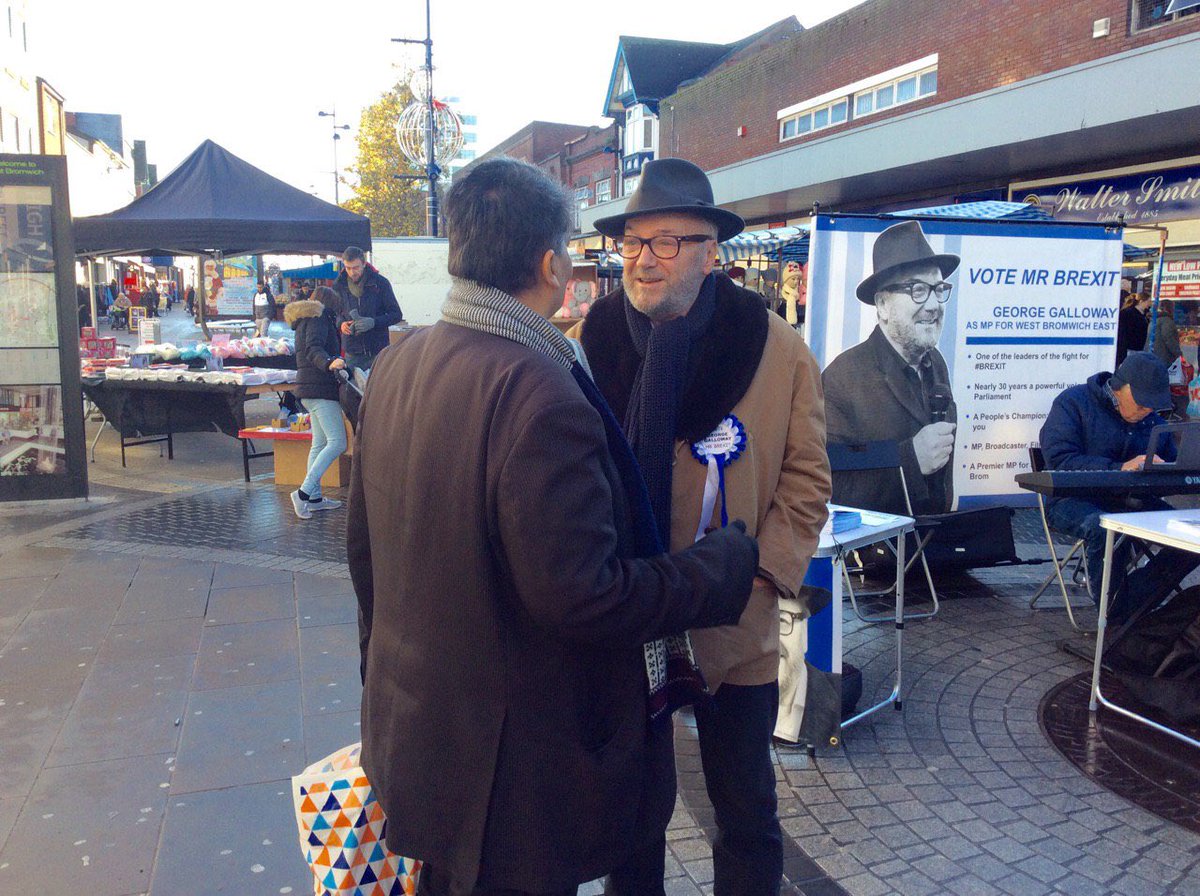 Tomorrow Belongs To Me.
oboogie liked this
I could never die, I'm Chuck Norris.
Fuck the Government, and fuck Boris.

Tomorrow Belongs To Me.

I'm thinking Les Dawson's rendition of 'Side by Side'.
Others?

Tory minister admits US will be able to increase price of drugs bought by NHS after Brexit
https://www.msn.com/en-gb/news/uknews/t ... ter-brexit

Dominic Raab has admitted the US will be able to ramp up the cost of drugs bought by the NHS after Brexit, but insisted the prospect is “hugely unlikely”.

Asked if Washington would be free to “jack up prices”, the Foreign Secretary replied: “The Americans will take their decisions.”

He then claimed: “I think it’s hugely unlikely, why would they do that?” – prompting Sky News interviewer Adam Boulton to say: “To get more money that’s why.”

The comments come after documents released by Labour revealed that drug pricing has been discussed by US and UK negotiators in exploratory talks.

Officials from the department for international trade officials had “positive bilaterals” and met with PhRma, the US pharmaceutical lobbing group, to discuss priorities for a future trade deal.

Mr Raab again insisted the NHS would not be “on the table for negotiations” in the US-UK trade deal Boris Johnson is desperate to secure after leaving the EU.

The government would “walk away” rather than sign up to an agreement that put the health service at risk, he said.

However, the US has demanded “full market access” in the NHS and is known to want to end the ability of Nice, which regulates medicine prices in the UK, to block drugs it does not consider value for money.

The Trump administration also wants to change patent law, potentially paving the way for US drug firms to demand higher prices for their medicines and over a longer period of time.

In his first comments since arriving in UK for the Nato summit, the US president tried to dismiss his interest in the NHS, saying: “I have nothing to do with it. Never even thought about it, honestly.”

He added: “I don't even know where that rumour started. We have absolutely nothing to do with it and we wouldn't want to if you handed it to us on a silver platter.”

However, it was quickly pointed out that Mr Trump himself said, in 2017: “When you deal in trade, everything is on the table – so the NHS or anything else.”

Jonathan Ashworth, Labour’s health spokesman, seized on the Foreign Secretary’s comments, saying: “Dominic Raab has finally admitted what we all know – Boris Johnson is opening the door to a Trump trade deal that will force our NHS medicines bill through the roof.”

Mr Raab suggested it would not be in the US’s interests to hike prices if “you reduce the amount, the volume of purchases”.

And he said: “The key point in this is that we will do the right thing by the patients the consumers in this country.”

And, on “drug pricing or any other involvement” in the NHS, Mr Raab insisted: “That is not on the table for negotiations.”

The prime minister, on the campaign trail in Wiltshire, said: “This is pure Loch Ness Monster, Bermuda Triangle stuff.”

Why does this Torygraph Brexiter need cheering up?[…]

And that's just one of them.