Saw this yesterday and thought of our members across the water. 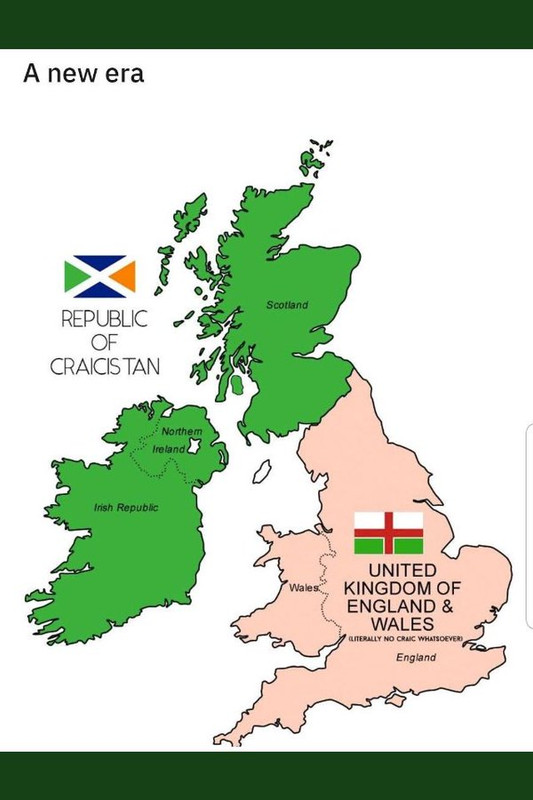 -  Sun Feb 02, 2020 11:04 am #597130
The whole concept of nationalism is garbage anyway. Why is anyone British? Simply because your parents fucked each other at a certain set of coordinates of latitude and longitude.

Balls to brexit and flag waving shite
Abernathy, oboogie, Arrowhead and 3 others liked this
Were going to hell in a handcart, you couldn't make it up!

-  Sun Feb 02, 2020 11:29 am #597132
To prove your point, take a peek at the original tweet and the oh-so-not-racist blinkered dipshits circle-jerking away. Wankpuffins declaring their love for Wanklundy.

In terms of the "main five" TV channels, Channels 4 & 5 are the same as in Britain (C4 has some local adverts, but that's it) while Beeb 1, Beeb 2 and UTV (the channel 3 licence holder, now owned by ITV Plc) has some regional programming both covering news & current affairs and also away from it (e.g. local sport, factual programming) - however we get all the BBC & ITV national news programmes the same times as shown in Britain, so we can watch the horror show unfold too.

However, politics and to some extent current affairs in NI exists inside its own petri dish, isolated from many of the general day to day matters that are of higher pressing concerns across the Irish Sea. Labour & the Lib Dems don't organise over here, and a small rump of Tories present are about as popular as Michael Barrymore presenting the medals at a swimming gala. So on that general basis, pretty much no journalist of any note is in the pocket of Johnson or the Tory establishment because it would be a futile exercise for Johnson & Co. not to mention any small element of sympathisers they might have over here. One consequence of NI's unique social mix is that at least on TV, presenters have to at least demonstrate an objective balancing act in their professional capacity if only because it is so, so easy for one side or the other to kick off about bias against them (though this has calmed down a bit in the last decade) and objecting loudly in the process.

Many of the faces on local telly programmes over here have been around for quite some time, and thus few are "here today, gone tomorrow" presenters whom move on elsewhere never to be seen on local screens again - some of them often move over to Britain like Eamonn Holmes and Gloria Hunniford, along with a few less well known but still prominent-when-you-see-them faces like Anita McVeigh and Colin Murray. Stephen Nolan somehow manages to balance himself on both bridges somehow between his BBC NI and 5 Live commitments.

Concerning radio, audiences here generally show a clear intent for local originated content no matter how good or bad it is. Commercial station brands prominent in Britain either don't exist here or are largely ignored - Heart, Capital, Smooth, Magic etc. Don't exist on analogue dials here, and their digital versions along with Classic FM, Absolute Radio and Talk Sport are largely an irrelevance. The BBC national stations also struggle to make impacts (though for some inexplicable reason Radio 1 is very popular in Derry city) which to some extent is caused by the local BBC station, Radio Ulster, being hugely popular and the most listened to station in NI according to RAJARs. The main commercial stations, Cool FM, Downtown, U105 & Q Radio, originate all their programming in NI - there is no networking with any station in Britain. But enough of that, like TV the local radio out here is (outside of whatever Stephen Nolan spews up - if you think he's bad at weekends on 5 Live you should see him on Radio Ulster or "Nolan Live" on BBC 1 NI) quite straight laced again due to the "petri dish" isolation from the political mechanics in Britain.

Finally for print media, it's been a long time since I've read most newspapers in any detail but the regular British based papers are sold over here, but apart from the Mirror and the Sun they are a mostly minority interest compared to the main three regionals - the Belfast Telegraph, Irish News & Newsletter. Oddly enough the Mirror and the Sun do have "local" NI editions though this is mostly just the same as their English counterparts with a few local stories thrown in, unlike their counterparts in Scotland and the Republic of Ireland which have separate editorial control. TBF the Mirror actually makes a go at local reporting for its NI issues, whereas in the case of the Sun it is little more than lip service. Unlike broadcast mediums, there's less straight laced reporting in the regional newspapers here, with editorial differences being more along unionist/nationalist lines rather than party or ideological ones seen in most other western countries - but again none of them are in Johnson's pocket.

To cap off, most of the Irish national media originating from Dublin & elsewhere south of the border is freely available in much of NI, available for consumption the same way. Most homes in NI can receive RTÉ1, RTÉ2 and TG4 on at least one telly though radio (FM anyway) is a little harder to pick up in around a lot of Belfast, and they have no presence on DAB here either (yet) - but most of the landmass itself can pick up cross-border signals without too many problems. However the only southern national radio station that has any notable audience in NI is RTÉ Radio 1.
Arrowhead liked this
Currently listening to "French Kiss" (12 inch version) by Lil Louis
Others?

mr angry manchester wrote: ↑
Sun Feb 02, 2020 11:04 am
The whole concept of nationalism is garbage anyway. Why is anyone British? Simply because your parents fucked each other at a certain set of coordinates of latitude and longitude.

As my granddad put it one Remembrance Day, when someone saw his WWI medals and said "You must be so proud to have fought for God, king and country".

"Forget that. Two of those I don't believe in, the other is just an accident of birth".

Or, as one of my t-shirts says:

-  Tue Feb 04, 2020 2:31 pm #597400
I've only just noticed that somebody down the road from me has decided to hang a bloody great Union Jack across their garage door. I'm guessing it's not to mark the UK's glorious progression to the 2nd round of the World Backgammon Championship last week

Mind you, kudos to the brave soul in nearby Hampton-in-Arden who has stubbornly kept a large EU flag aloft outside their house for the past three years. Joined recently, interestingly, by the Swedish flag and a Union Jack. The same house displayed a "Vote Labour" poster in its front window for months after GE2017, but tellingly remained neutral in GE2019.
"Patience is bitter, but its fruit is sweet" - Jean-Jacques Rousseau

oboogie wrote: ↑
Sat Jan 11, 2020 1:50 pm
About 30 years ago, I taught myself to play a rather obscure Billy Bragg B side called "Quebec, Ontario and Me". It's opening riff and instrumental passage bear some similarity to Beethoven's Ode To Joy (seriously, Beethoven should sue Bragg). As a consequence, I ended up working out a version of the whole of Ode To Joy and including a segment of it in my version of the Bragg song. To this day it remains the only classical piece I've ever bothered to learn.

Any Brexiter celebrations round my way will be met with me, in the garden, amp on heavy distortion and turned up to 11 playing the European Fucking Anthem.

Until my fingers bleed.

The Red Arrow, Oblomov liked this
That subtle admixture of the absurd and the surreally plausible...

Excellent research Malc'. I make that one out of […]