-  Tue Aug 08, 2017 1:03 pm #515606
I wonder if Nigella would have had a career, first as a journalist and later as a TV chef, if her father hadn't been the Chancellor.
"There ain't nothing you fear more than a bad headline, is there? You'd rather live in shit than let the world see you work a shovel."

Andy McDandy wrote:I wonder if Nigella would have had a career, first as a journalist and later as a TV chef, if her father hadn't been the Chancellor.

I agree, but there's usually space on TV for a bit of vaguely posh totty with a massive rack, parentage notwithstanding.
"It is the duty of a newspaper to comfort the afflicted and afflict the comfortable."

http://www.bbc.co.uk/news/uk-england-london-41466140" onclick="window.open(this.href);return false;
"I am not expendable, I'm not stupid and I'm not going outside."
(with apologies)


The National Gallery is the most important art gallery in UK for Western (Secular and Christian) art, from 16th century portraits to modern art. It seemed to me that hosting such a demonstration in front of the Gallery and in Trafalgar square, was both an inappropriate, unnecessary provocation. It seemed to me like an Islamic show of strength rather than a condemnation of extremism.

-  Tue Oct 24, 2017 8:26 am #522890
'Are you going to blow us up?' Viewers outraged as woman has Islamophobic abuse hurled at her as she walks past her local pub while wearing a hijab and posing as a Muslim in shocking TV show
http://www.dailymail.co.uk/femail/artic ... raged.html


The Mailites aren't shocked. They side with the knuckle dragging morons shouting abuse at a women from their pub garden:


B. K. Sargent, Walsall, United Kingdom, 7 hours ago
Where's the show about the abuse received by everyone else when walking through "no go zones", yeah I thought not.
+10668 -1069

ndt927, Hereandnow, Philippines, 7 hours ago
This so obviously a scripted, made up reaction. C4 at their same old game. Full of left wingers who feel the need to make up the news.
+8107 -845

clare21, wirral, United Kingdom, 7 hours ago
Katie should have met some men and gone into schools and real communities, not a middle class educated family. She walked past a pub, dressed like that after a major atrocity when feelings were raw. Staged and coerced load of nonsense.
+7067 -520

Bristolbeau, Bristol, United Kingdom, 8 hours ago
Quite simply the way this woman is dressed is alien to the majority of true Britons, it belongs to a different culture and geographic location to our own, of course people will look and make comment, at least we're tolerant enough to allow it on our streets...try walking down a middle eastern country in a short skirt and revealing top and see how well that goes down!!
+6136 -769

News Hippo, Surrey, United Kingdom, 7 hours ago
"I am outraged" Said no one anywhere. "I am offended' Said some virtue signallers on Twitter.
+4771 -315

Jolondolo, Staffordshire, United Kingdom, 8 hours ago
Now lets do an experiment of white people walking down the road with a pint and a cigarette in Saudi Arabia. Cultures will always clash, get over it.
+4756 -358


And someone comes to her defence...


HustlersParadise, London, United Kingdom, 1 hour ago
Still no woman deserves to get treated like that does she?
+51 -207

Oh. Muslim women DO deserve to be treated like this.

Donald Trump says UK should 'thank him' for claiming parts of London are so radicalised they are no-go zones for police
They fuck you up your mum and dad,
But not as much as Brexit will.

‘I didn’t know any better’: Woman who blacked up in a burka for My Week as a Muslim says living among the community she feared cured her 'ignorance'

She was wearing a hijab.
I'd rather shoot Paul Dacre than anyone else in the country- Colin Dexter. A direct quote from the Radio Times m'learned friends


Bake Off's Nadiya Hussain reveals her husband does ALL the chores at Christmas as she shares her tips for a stress-free day - including three ways to entertain children of any age
http://www.dailymail.co.uk/femail/food/ ... z4xBDqu8bl" onclick="window.open(this.href);return false;

the public awakes, rightnotleft, United Kingdom, 25 minutes ago
No, it's left wing agenda

the public awakes, rightnotleft, United Kingdom, 5 hours ago
Classic dog in a stable

Martinfl6, canterbury, United Kingdom, 1 day ago
But she and her family do not celebrate a christian Christmas, are we being taken for fools ?

Shropshire Lass, Ellesmere, United Kingdom, 1 day ago
Sorry but I feel she's jumping on the Christmas bandwaggon and I would bet that she doesn't serve turkey etc. Anyway the pigs in blankets would be a no no even if she used beef sausages.

Groundworker, Derby, United Kingdom, 2 days ago
I can't understand what she says. She should learn English first.

To be fair most commenters are telling the nutters to do one. 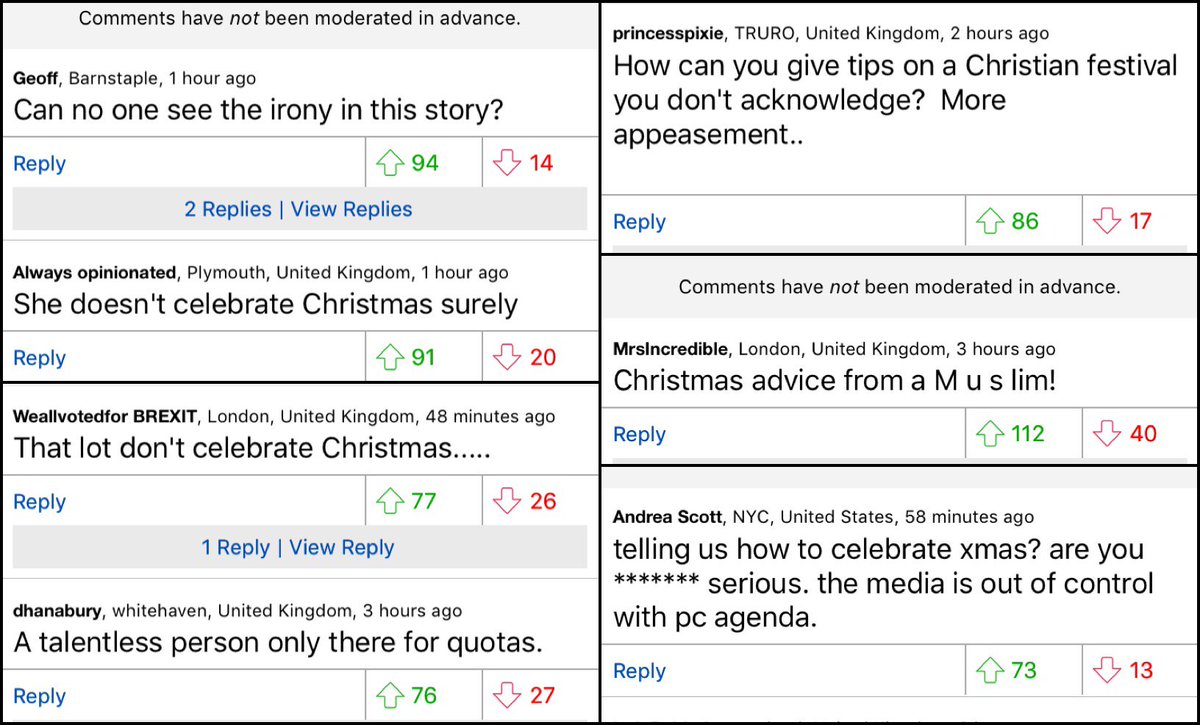 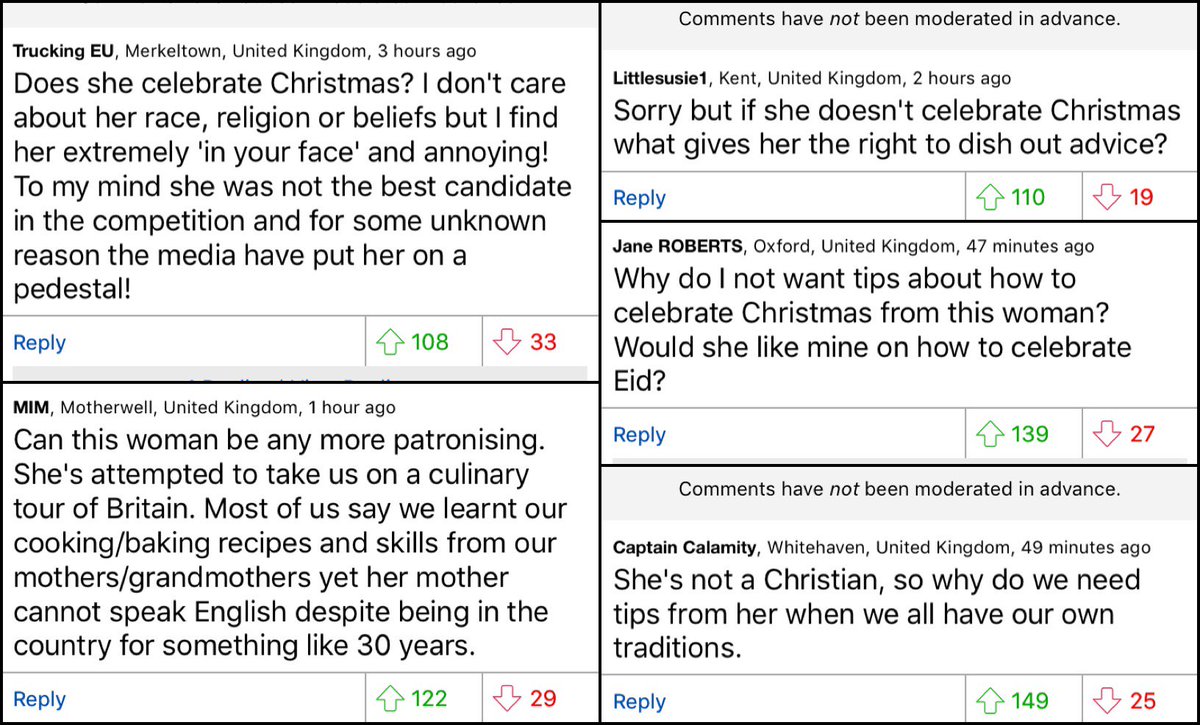 bluebellnutter wrote: I don't spend a second in a church.

Neither do most of the intolerant bastards quoted above.

Douglas Carswell has apparently emigrated to the U[…]