Or "TV ad for the Beveridge report" 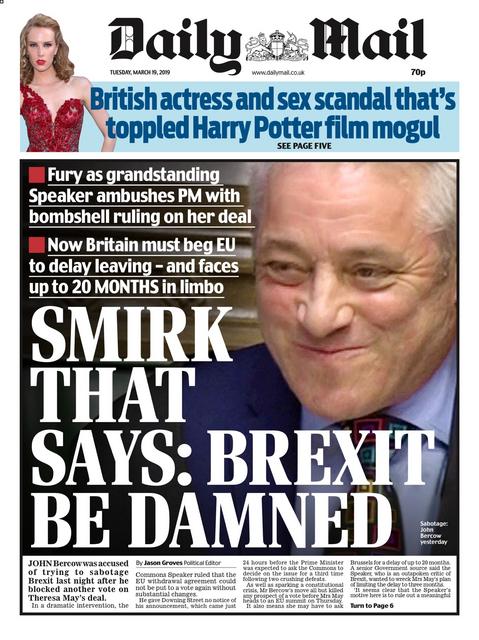 -  Mon Mar 18, 2019 10:46 pm #569606
It's a right royal pisser when Parliament exerts some sovereignty, isn't it?
By reading this post you agree that I can sell your personal & contact details to corporate agencies who make judgements about your character that may involve your future removal from society by means which the aforementioned agencies deem fit.
Others?

Proof, were it needed, that, in 99% of cases, an editorial stance is a commercial decision rather than an ethical or balanced one.

(Imagine being some poor quali having to moderate those focus groups in Hainault and Peterborough in the weeks following Greig's ascendency to the throne. Carnage.)
Jack believed in the inherent goodness of humanity, and felt a deep social responsibility to protect that. Through us all, Jack marches on.

What an absolute fuck-up we are.

And follows the rulebook.
They fuck you up your mum and dad,
But not as much as Brexit will.

-  Tue Mar 19, 2019 6:51 pm #569733
Rules and laws are entirely fundamental to any decent and ordered society. Until they inconvenience me in any way, shape or form.
Ní uasal aon uasal ach sinne bheith íseal: Éirímis
Others?

Kohlberg's six stages can be more generally grouped into three levels of two stages each: pre-conventional, conventional and post-conventional. Following Piaget's constructivist requirements for a stage model, as described in his theory of cognitive development, it is extremely rare to regress in stages—to lose the use of higher stage abilities. Stages cannot be skipped; each provides a new and necessary perspective, more comprehensive and differentiated than its predecessors but integrated with them.

(How can I avoid punishment?)

3. Interpersonal accord and conformity


Homework: At what general level of moral development would you consider Theresa May and her disciples to be operating?
The pain broke me, brotherhood relieved me, and from my wounds sprang a river of freedom. (Paul Dorey)
Inscription on the Mémorial de la Paix, Caen.
How soon we forget.

MisterMuncher wrote: ↑
Tue Mar 19, 2019 6:51 pm
Rules and laws are entirely fundamental to any decent and ordered society. Until they inconvenience me in any way, shape or form.

The Mail is that "Otherwise law abiding" drunk driver.
The educated differ from the uneducated as much as the living from the dead. Aristotle
Others?

A potential upside will be the publicity shots of […]