-  Wed Sep 26, 2018 2:37 pm #555082
As if a feelancer looks out of the window to the garden for bogus name inspiration. Mail reader Arthur 'Two sheds' Jackson has strong views on cultural Marxism and the PC liberal elite.

I know, hence my comment. Someone with a developed sense of irony is taking her name in vain! Or, of course, one of the famous paid freelancers running out of inspiration.

The female award goes (for the 73rd tear running) to Janet Daley off of the Telegraphs.
The educated differ from the uneducated as much as the living from the dead. Aristotle


This has been the week that Labour went full Commie tonto. Some of the policies proposed at the party conference in Liverpool belonged to Castro’s Cuba, an island reduced to penury by rigid Left-wing dogma.

And after Jeremy Corbyn’s weirdly whispery closing speech yesterday — he even spoke Spanish at one point — we all know who fancies himself as Comrade Fidel, bearded grandfather of ‘la nacion’.

Mr Corbyn’s cold-blooded sidekick John McDonnell came up with an economics programme which included Marxist ideas such as workers’ councils. These would be to elect bosses in private firms.

The Shadow Chancellor also proposed a tax-whack against banks and utility companies, which would be forced to hand 10 per cent of dividends to the Government. Whitehall would then cream off much of the loot before passing a tip to employees.

Both ideas are a certain way to send investors abroad, and thus impoverish the very workers they are meant to help.

The conference debates also revealed acid hatred of Centrists and Tories, including the continued dancing on Margaret Thatcher’s grave.

Then there was the suggestion a Labour PM would consult ‘the wider community’ before responding to attack by a hostile country.

Imagine: the Kremlin has dispatched warheads and our PM has minutes to react; but the Corbynites say their leader would assemble a convention of workers’ reps and stakeholders — and no doubt Len McCluskey and his trades union heavies — to assess the mood of the compositing room before ordering the Ministry of Defence to send any RAF jets.

Incoming missiles would have to wait in a holding pattern over Heathrow until PM Corbyn was ready. This is madder than any Dr Strangelove nuclear war satire.

Having sat through the week’s debates, I sense the Corbyn movement may, howsoever dottily, be on to something. Policy can be a surprisingly small part of electoral appeal. When voters head to the polling station, other factors will inform their choice.

Which leader makes them feel warm? Which side speaks with clarity (even if that is another way of saying simplicity)? Ooh look, that Mr Corbyn is offering us free babysitting. That would save us a few quid. And he seems a kindly old gent, doesn’t he? (Note to waverers: no, he is not!)

Which party has zip in its tank? Whose activists look more representative of society? What sort of accents do they have? What are our grandchildren saying?

On all these fronts, Corbyn’s Liverpool gathering may have scored highly. The Tories — led by cautious, sober Mrs May — need somehow to match that.

Vitality and optimism were evident in Liverpool in bagfuls. Despite those outbursts of anti-Thatcherite bile, such as when Aslef leader Tosh McDonald boasted that he used to set his alarm an hour earlier than needed, just so he could hate Mrs Thatcher for an extra hour, the more common mood in the conference hall was upbeat.

For every Tosh who snarled, another delegate spoke with excitement. These delegates were chosen pretty much at random. They were not frontbench Establishment bores, or sycophants approved by the party hierarchy, as happened in the Blair years and still happens at Tory conferences.

The Liverpool conference was refreshingly democratised, and when they spoke about grotty trains, stupid planning laws or City fat-cats, they may —despite McDonnell’s mad Marxism — have had many in Middle Britain nodding in recognition of things that could be done better by the State.

Some were the sort of people you might easily have found interested in David Cameron’s Tory party: a pukka young Derbyshire woman called Samantha, a parliamentary candidate called Hugo and a retired social worker from Wolverhampton in a smart yellow top. The last announced she had not prepared a script, for she had never expected to be given a chance to speak.

Instead of the usual spiel of slogans, she described extempore how she had found a down-and-out at the door of her supermarket and taken the lad off for a cup of coffee to try to understand his problems.

I am not saying a modern Tory would never behave in such an altruistic way. Many would. Nor am I saying that the Wolverhampton woman’s preference for big-State solutions to poverty was right.

I believe a low-tax, small-state economy could result in less homelessness because it would create more jobs. But it is hard to imagine such a lay activist ever being given the platform at Conservative conferences.

The policies of Corbynism may be raw nonsense, but by wrenching control of the party from the Blairite elite, he has rejuvenated Labour. Conference-goers duly felt comfortable enough to criticise Labour parliamentarians.

A man called Dan thundered that ‘being an MP is not a job for life’. Steven from Edinburgh warned Labour’s MPs: ‘If you won’t reflect our views, we will replace you with someone who does’. Amanda from Mansfield said if MPs were reluctant to put themselves up for regular re-selection by their local parties, they were ‘in the wrong job’. Maria from Gorton cried: ‘You can’t just treat us as door-knocking fodder.’

How amazing it would be if rank-and-file Tory members in Birmingham were given a similar opportunity.

What would they say about MPs such as Sarah Wollaston, Anna Soubry and Nicky Morgan, who determinedly try to block solid Tory ideas? Independence of mind in an MP is one thing, but when they so consistently cause trouble for the party, there comes a point when volunteers will either give up or seize control.

That is what has happened in Mr Corbyn’s Labour, and I suspect many non-partisan onlookers will have thought ‘good for them’. Some of the wiser Tories already see this.

They grasp that, for all the received wisdom about the Centre no longer being important, elections are still decided by swing-voters. And swing-voters don’t mince their words about the City slickers who have so long ripped us off with Public Finance Initiative contracts or their Carillion-style behaviour on pension funds.

Or take enormous pay-offs and abuse gilded networks which allow newly retired civil servants and politicians to walk into juicy private sector jobs (the example set by former Chancellor George Osborne, who has umpteen jobs and multiple conflicts of interest). It is simply grotesque. Sorry, there is no other word for it.

In the mid-Nineties, John Major’s stale Tories assumed ‘Bambi’ Blair was unelectable. They lost the next election in a landslide. Similarly, before the 2015 General Election, Labour MPs in Scotland thought they had jobs for life. Their complacency saw all but one of them booted out of office.

I am not convinced Corbyn could pull off quite such an election shock, but the lifeless, wan May regime is doing its utmost to help them.

It is trying to blunt Brexit. It has a terror of radical clarity on tax-cutting. It cleaves to limp political-correctness —only yesterday the Government Equalities Office was tooting its trumpet about a ‘partnership to promote and improve reporting on gender equality in the workplace’. That won’t shift a single vote.

But imagine if the Tories started speaking of liberty, of tax-cutting, of proper defence spending, of cutting the foreign aid budget by two-thirds, and of getting us cleanly out of the EU, no strings and caveats.

And imagine if they did it with a sense of joy. Impossible under Theresa May? If so, find someone more charismatic.

Britain is an island of rich potential. It has wonderful people and an enviable off-shore location — just like Cuba in the Fifties.

A generation later, after Castro’s Corbyn-style ideas, it was banjaxed, naked in debt, its citizens half starved and its industry crocked.

The Tories need to wake up or the same could damn well happen to us.

The flipside of Lett's thinking, the 'Tories need to have some joy' is just vacuous. As if someone yelling stupid slogans about Brexit and Tory strength ad nauseum hasn't already been tried and shown to be absolute rubbish. It doesn't fly because that's not how this works. Not least because the Tories seem to want to eat themselves as much as anything.

-  Thu Sep 27, 2018 8:46 am #555124
Imagine. Imagine Houston lost to Santa Anna at San Jacinto. Texas would still be a Mexican state. Buddy Holly would have gone into the masked wrestling business. So many knickers not dropped behind so many church halls...oh, fuck off, Letts.

And let's face it, we know what happened next there.
"There ain't nothing you fear more than a bad headline, is there? You'd rather live in shit than let the world see you work a shovel."

-  Thu Sep 27, 2018 10:48 am #555149
There's a certain type of Mailite who always tries to sound like an old colonial sweat from a minor public school, even though the closest they've come to such a lifestyle is 2 weeks in Sharm el Sheikh and Shit Street comprehensive. Still, they'll be banging on about backsheesh and punkah-wallahs. They probably cribbed it all off Flashman books.
"There ain't nothing you fear more than a bad headline, is there? You'd rather live in shit than let the world see you work a shovel." 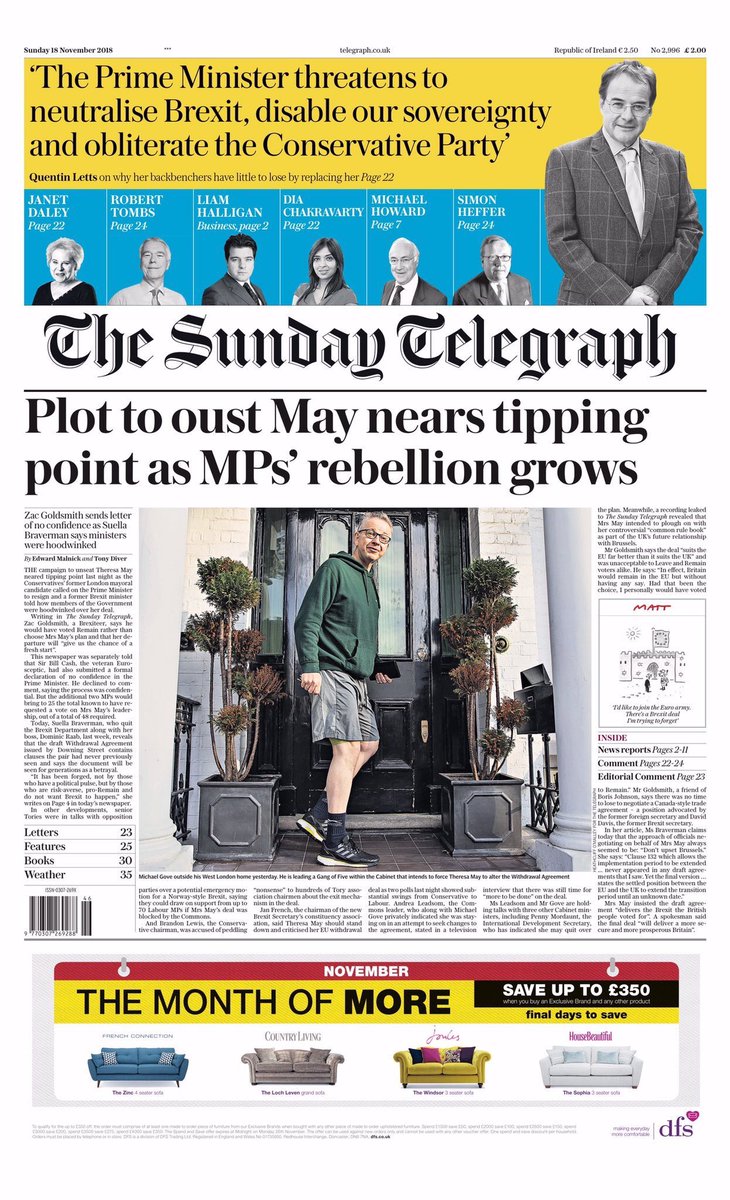 Given the party membership, it'd be Patel.

This bodes well for UK citizens living in EU count[…]

Excellent research Malc'. I make that one out o[…]