by Zuriblue
Talk about hitting the nail on the head.

My view, for what it's worth, is that we already have a generation of kids who are good at passing exams but no emphasis on critical thinking and it's going to get worse.

Andy McDandy wrote:Yes, but try convincing anyone of that. He's creating a generation of people good for pub quizzes but not much else.

The KBD (kings, battles and dates)/'island story' approach to history simply doesn't stand up to scrutiny. We won everything because we were British, then everyone threw their hats in the air and shouted huzzah. That's about it.

The right wing bang on about dumbing down. They're the past masters at it.

An excellent post. I'm genuinely fearful for my daughter, now starting school, and would leap at the chance to move back to Scotland to get away from Gove's educational taint.

They vote to ban creationism from schools. We get bibles - a book almost every school library would already have - with an intro from the secretary of state for education.

by The Weeping Angel
Heffer's gone


When the appallingly pompous Simon Heffer left the Telegraph four years ago, he told colleagues “I have had very happy times at the Telegraph and have been blessed by good colleagues and wonderful readers”. Then editor Tony Gallagher told “Simon has been a terrific colleague, trenchant columnist and wise counsellor. While I am sorry to see him depart, I fully understand his reasons and he leaves with everyone's best wishes”.

by crabcakes_windermere
I'd say don't let the door hit you on the way out,but given his increasingly substantial girth I think this is all but impossible these days.

Joking aside, I'm starting to think there's seriously something in how a Tory life can ruin you physically. Farage at 51 is famously younger than Brad Pitt. Heffer, who you'd assume was in his 60s, is barely older at 54 - the same age as George Clooney.

Granted we can't all have movie star looks, but whacking on an extra decade by being greedy, bitter and dressing like a 1950s businessman hardly helps.

by youngian
Farage tried to excuse Roger Helmer's gaffs as a man of his era when he is younger than David Bowie. Even Farage mistakes Helmer for a 70s sit-com character.

by The Weeping Angel

youngian wrote:Farage tried to excuse Roger Helmer's gaffs as a man of his era when he is younger than David Bowie. Even Farage mistakes Helmer for a 70s sit-com character.

He thought he was the major of Fawlty Towers

by youngian
How many 'Enoch was right' articles has Simon Heffer written over the years?


Paris is tragic proof that Enoch Powell was right about threats to our country
http://www.telegraph.co.uk/news/uknews/ ... untry.html

He is but the latest prime minister to have paid lip-service to the warped ideal of multiculturalism, and all that entails. In case one is unsure what it does entail, let us run through the card. It is an idea that the cultures and values of new, minority communities are the equivalent of the majority ones.

It means the majority culture may not expect those from minority cultures to abide by majority ways. It carries with it an expectation to tolerate attitudes that the majority reject, such as towards women and those professing other faiths. And it abjures interference in those minority cultures, for fears of accusations of racism. That last fetish has paralysed sensible response to multiculturalism for decades, and continues to stop any senior politician giving the right lead today.

Showing all the mastery and clear thinking of his prophet Enoch, Simple Simon has thought up a solution for 'mulitcultural' French- secular assimilation

That means presenting a common culture through our education system, our employment regulations, our welfare state and through the enforcement of our laws. This is not to punish people from minorities: it is to ensure they can participate completely in our society, are equal under the law and are, above all, completely integrated into our way of life.

Today, too many are either on the margins or not communicating members of our society at all. Letting this happen, to coin a phrase, is “like watching a nation busily engaged in heaping up its own funeral pyre”.

If you put Heffer's brain in a walnut you'd hear it rattle.

by The Red Arrow
The wank is strong with this one.

by Messianic Trees
Another Enoch was right article from Heffer:

(The original seems to have been deleted by the Telegraph).

by youngian
Heffer really is a gargantuan cunt. Not the sort to push turds through Asians' letterboxes but provide it while out walking his dog and then turn into a side street. 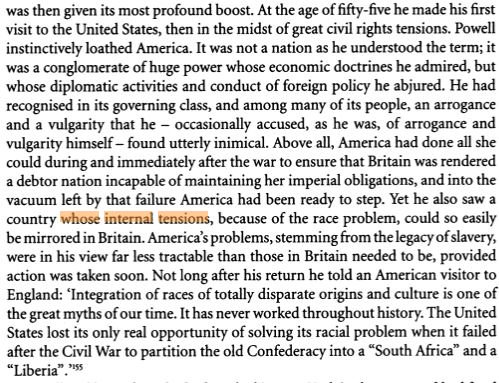 Take notice of the second point in particular.
All times are UTC
Page 23 of 23
Powered by phpBB® Forum Software © phpBB Group
https://www.phpbb.com/