@westminsterWAG
obviously not in tune with her readers 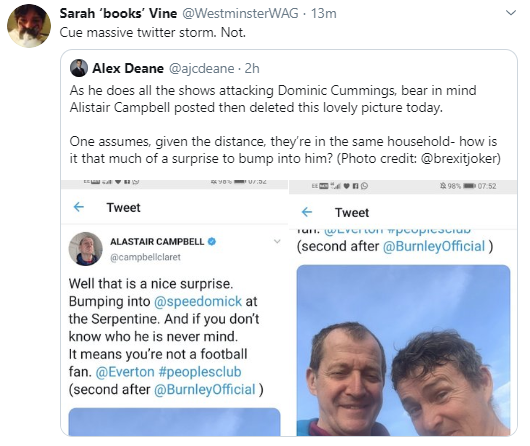 Ah yes because getting a bit close for a brief selfie (which you should not do, to be clear, back off the fucking pair of you) is the same as being a senior advisor to the government, driving hundreds of miles in a Land Rover packed with Covid-19 and driving to Barnard Castle and trying to cover that up with a preposterous, insulting excuse.

Who am I kidding? I nearly replied to that tweet pointing this out but she knows it.

-  Wed May 27, 2020 2:05 pm #611790
I was wondering if Mrs V is in a bit of a dilemma about this current situation; does she hold back, because if they finally see fit to shove de piffle over the side, Mikey The Snortner is bound to make a bid for the big chair. However, it was the same Mikey who brought Cummings in, in the first place, so tainted on that score.
The world is not full of arseholes; but I always seem to encounter at least one a day!


Furlough isn’t a free holiday
Speaking to friends of mine who run small businesses (a chiropractic clinic, a production company, a dog-walking service), a pattern is emerging. Staff who have been furloughed simply don’t want to return to work. Their rationale is that they can get 80 per cent of their salaries to sit in their gardens, get nice tans, play with their kids, make banana bread, do yoga and generally have a nice summer — and return in autumn when the scheme ends.

Don’t get me wrong, I can completely see the appeal of this idea. Trouble is, if everyone behaves that way, there won’t be anything to go back to. The furlough scheme was conceived as a vital lifeline for people during this deadly crisis — not an excuse to have an extended holiday at the expense of the taxpayer.


I've worked throughout this whole thing and fuck me, I'm glad I wasn't furloughed, friends of mine have told me of the fear of redundancy and the reduced income they've dealt with and it doesn't sound like a lot of fun, as stressful as work has been over the last couple of weeks. This and the tweet today show exactly what Vine thinks of ordinary people who have had their lives upended due to all this while she and her husband continue to be paid as normal. Just get fucked, Sarah.

Also, chiropractic is a load of old shit.

-  Wed May 27, 2020 7:34 pm #611866
A production company is a small business? I was watching a n episode of Screenwipe from about 2006 which went into some detail about how much a relatively simple show costs. OK, it's not multi millions, but it's a lot.
Boiler, Oblomov liked this
"There ain't nothing you fear more than a bad headline, is there? You'd rather live in shit than let the world see you work a shovel."

Andy McDandy wrote: ↑
Wed May 27, 2020 7:34 pm
A production company is a small business? I was watching a n episode of Screenwipe from about 2006 which went into some detail about how much a relatively simple show costs. OK, it's not multi millions, but it's a lot.

This is not really fair. The mother of my daughter is a doc maker and, as a Production Manager, falls squarely in to that category. She bills out about 600 GBP a day can actually charge out barely a hundred in any one year. The rest is a full time job pitching and preparing for gigs which may or may not be commissioned.

60k a year is certainly a pretty penny but it is also where she is now after years of running for coffees on Taggart. And, with everyone on here knowing the docs she makes, few would, hopefully, have a problem with the cultural fabric to which she contributes.

The comparisons between the value of her output and that of Lady MacSwapper are hard to reconcile.
Jack believed in the inherent goodness of humanity, and felt a deep social responsibility to protect that. Through us all, Jack marches on.

-  Wed May 27, 2020 7:57 pm #611870
I'm living the dream, as you all know. Everyone I know, however, is climbing the walls - and, having budgetted their miserable little people's lives to the penny for years, are desperate to return to their 'normal' existance.

-  Thu May 28, 2020 9:28 am #611934
The only conversation Vine has had about furlough is what she's been told to write either by her editor or via Pob, thus that template line about having a taxpayer funded holiday.

I don't doubt people have enjoyed the break (shock horror, taking some time for yourself is a good thing!) but it's probably not lasted long as they'll eventually begin to wonder if there's a job for them to go back to.
You made him a poacher yourself, Squire
When you'd give not the work nor the meat
And your barley-fed hares robbed the garden
At our starving poor little one's feet

-  Thu May 28, 2020 9:35 am #611937
And others have been laying around doing nothing. Largely, by virtue of being dead.
Jack believed in the inherent goodness of humanity, and felt a deep social responsibility to protect that. Through us all, Jack marches on.


Looking for the bit in her posting history where she condemns the VE day street parties and drunken congas rather than waffling on about the great British bulldog spirit, but can't seem to find it.

I'm sure she's been equally critical of people behaving the same way on Britain's beaches. That's definitely something she's done.

Caution! Vine thread contains video with title 'Granny with her jugs out on V.E day'.

Sarah Vine wades in. Awful racism BUT..., shameful past BUT..., etc. While comparing "the mob" to ISIS, wild animals, savage, un-British. Comments are as you'd expect.
"There ain't nothing you fear more than a bad headline, is there? You'd rather live in shit than let the world see you work a shovel."

Actually, to be fair, he has to beat Kelly Loeffle[…]

Some of them probably had memories of the elected […]

This is an area where the Tories - by schmoozing a[…]

I presume Johnson was too busy writing begging l[…]