Politics Live is going to be discussing Shapiro at some point in the next hour, along with Isabel Oakeshott, Trevor Phillips and the Deputy Editor of The Spectator.

Fair and balanced indeed.
Last edited by Samanfur on Fri May 10, 2019 11:41 am, edited 1 time in total.
"It is the duty of a newspaper to comfort the afflicted and afflict the comfortable."

davidjay wrote:
With Danny Baker you never know. He's an odd character and I think that part of the current furore is because he doesn't act how people expect him to. He looks the epitome of laddism so Lads don't like him not being laddish. Then modern-thinking Metropolitan Elitists don't like his uncouth ways. And so on.

I also think he's been caught in the crossfire between the Ukip freedom of speech bigots and the permanently offended. At which point I lose my temporary Mailite mentality and return to normal.

Exactly. On many occasions he has quite freely admitted that he doesn't know what's going on in the wider world, even referring to himself as “Johnny Head-In-The-Air” .Unless something has changed in the last few years, he doesn't even own a mobile.

The problem always is that to 95% of the population, he's the loud mouthed opinionated cockney bloke who sold Daz and Mars, and went out on the piss with Evans and Gazza all the time (I'm actually surprised I haven't seen that twenty year old picture of them out together everywhere in a Brand-And-Ross stylee)

And when they listen to him, they end up listening to someone who opens a fair few of their shows by quoting from Sir Henry At Rawlinson End, and with a love of music, film, old school variety and music hall, television, and P G Wodehouse. They'll listen to ridiculous stories from his youth, a fair few of which have been dramatised in Cradle To Grave a couple of years ago. He involves his audience arguably better than any one on the radio has, save probably the late Wogan and Peel.

Where else are you going to get people clamouring to phone up to lay claim to a theme tune, a character from The Godfather, a London borough, an album, a US state or a host of other things. It's always been inclusive. He's had his running stories through the various radio stations he's been at over the years, from how his father broke the news of the death of Marc Bolan to him (“Who's that fella you like? The one with the sparkles? Dead! Gorn! Planted!”) to, yes, Monkeys Dressed As Famous People With Fairground Music.

He's shown before that he won't suffer fools lightly, or indeed put up with any sort of intolerance, once throwing Rory McGrath off his BBC London show because he was making snide remarks about his co-host Amy Lamé because she is a lesbian. And certainly his shows have, by and large, been an escape for people, with not a hint of any racial, sexist or xenophobic overtones. They've mostly been an outlet for people to come and tell stupid stories.

Basically, it's not what you expect when you listen to him, and that's what makes him, in my opinion, one of the greatest broadcasters we have today. He brings something different to the table, and people don't like that. Like Wogan had his Togs, Baker has the Treehouse. I've been a member of that Treehouse for many years, and a member of the Internet Treehouse messageboard. Having met several people from there, I can advise that there is a lot of similarities with the outlook here in these hallowed pages. Liberal-minded, tolerant, and a love of the absurd. Rest assured, that if any of us had thought for one nanosecond that racism was a part of Baker's psyche, the Treehouse would have been deserted years ago. I for one, would have certainly been off like a shot.

But, on the other hand, he has a habit being a hot-headed idiot, and we saw that yesterday. He's always been reactive rather than proactive. From the footage of him berating some unsuspecting soul at Waterloo during his days with LWT, to the referee rant on Radio 5 in 1997, to his spectacular rage filled final show at BBC London. He has unbelievable confidence in himself, having got through life with a fair bit of luck, and if anything this has become more prevalent since he had his bout of cancer of the head a few years ago. And that sometimes can come over as nothing more than arrogance on his part.

And this is where he went badly badly wrong in the last 48 hours. He should have made the connection with the tweet he published and how it would be perceived. Problem is, one of his biggest faults is acting before thinking, always has been. He seems to lack that “Hang on, do I really want to do this?” safety mechanism that most of us have, it's more a case of “Wahey, this'll be a lark!” followed by “Oh, bollocks”.


The mea culpa tweet that's gone out today should have been done 24 hours ago. But stupidly, he thought that he can give it his usual swagger and bravado and people would realise that it was preposterous to think that he could be racist. He forgot one thing, what the public image is of him for 95% of people. He only made a bad thing worse.

People have compared this to the Clarkson punching incident, and I think there are several similarities. It may not be a popular opinion around here, but I do genuinely like Clarkson, and when he's not being the TV version of himself, he does come over as a thoughtful, intelligent chap. I think what went wrong is that the lines between the public and private personas became blurred and he became too much like the TV version. And I think that's what has happened to Dan in the last couple of days. He thought all he had to do afterwards was say “What ho! Bit of a faux pas there, wasn't it?” and that would be fine. Clearly, anyone could see that wasn't going to be the case here.

Of course, you could argue that I'm biased here, and if say, Littlejohn, or even YaxLen or someone I didn't have any time for had tweeted something like that, I'd be part of the mob demanding retribution. But the difference there is that the two above have got form for racist comments. Baker, in all the hundreds of hours I've listened to him over the best part of three decades, has not. And if he even did have those sort of tendencies, which have laid dormant for over sixty years, why on earth would he suddenly announce them to the world by applying them to probably the most talked about child on the planet in the white-hot glare of Twitter?

I'm disappointed in the man, believe me. He's been a stupid, idiotic, unthinking imbecile with an inflated sense of his own importance that made a bad situation worse, and now he's got to live with the consequences. Humble pie needs to be eaten, and a lot of it. I'll wager, as I said before, cold drinks had been taken before the top-hatted chimp was unleashed on the world, and someone close to him needs to take the bottle away from him before he logs on. His tweets during the World Cup last year were not exactly his finest moment.

However, we all make mistakes in life, albeit not often with such far-raching consequences as what has happened here. And he has now offered a full and frank apology. Careless, ignorant, foolish, most certainly, yes. Purposefully racist? No, and I think he is mortified beyond belief that people think that way about him. But he's made his bed, and now he has to lie in it.
Abernathy, bluebellnutter, Bones McCoy and 7 others liked this
"He's the leader of the gang. He's the top, he's the tip, he's the championship. He's Top Cat. And he's scum!"

Kreuzberger wrote: ↑
Thu May 09, 2019 7:36 pm
Old NME pal of Gary Bushell and lifelong Millwall fan in racism shocker? Get him to fuck.

Bushell never wrote for the NME and I doubt the pair of them were ever mates.

Indeed, Bushell was on Sounds. Silly me.

The two of them were as thick as thieves though, back in the day.
Jack believed in the inherent goodness of humanity, and felt a deep social responsibility to protect that. Through us all, Jack marches on.

Exactly. On many occasions he has quite freely admitted that he doesn't know what's going on in the wider world,

There's a difference between that, and not even knowing that Meghan was pregnant. The birth was the lead item on the news for two days.
He doesn't seem to be able to point at examples of him using that picture for other royal sprogs.
They fuck you up your mum and dad,
But not as much as Brexit will.

-  Fri May 10, 2019 4:12 pm #574556
Baker, like Chris Evans, has had a tendency on both radio and television to throw stuff at the audience in the hope that something sticks. Segment doesn't work? No problem, something else will be along in a minute.

Both, I think, have been caught out by the internet's ability to remember, and the media's desire for conflict. Baker with this, and Evans with the Top Gear cenotaph stunt.
"I've tried to think of something clever to say about Rod Liddle, but I think he's just a cunt."

Aaron Banks is trying very hard to be the most loathsome cunt out there: 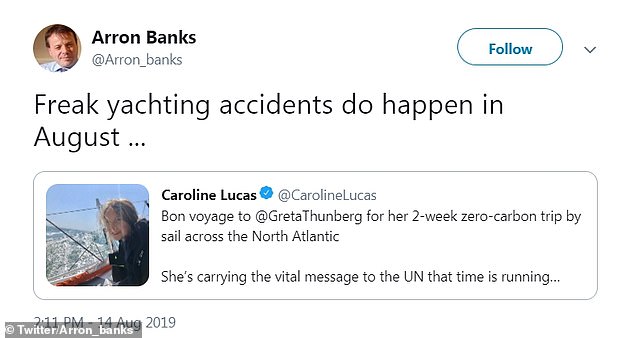 'How would you feel if someone posted this about your daughters?' Brexiteer Arron Banks sparks fury with sick 'joke' about climate change activist Greta Thunberg DROWNING during yacht voyage to US
https://www.dailymail.co.uk/news/articl ... wning.html


They've only allowed one comment through so far for some reason.

Charles, Nottingham, 8 hours ago
Did they make the yacht carbon free in its construction, thought not. How about all the other delegates getting there private aircraft?
+1266 -280

Well, I laughed when I saw your quote for my house insurance recently.
Last edited by Boiler on Thu Aug 15, 2019 8:45 am, edited 1 time in total.
"I am not expendable, I'm not stupid and I'm not going outside."
(with apologies) Anyone taking a moment's thought would see the myriad issues with it. Therein is the problem.

Just for balance from the same SYB: Screenshot_2[…]

I'd have read the first line and wiped my arse on […]

I think Simon Hoare is spot on. My wife has audite[…]