Olden days were the best or summat...

-  Fri Mar 23, 2018 3:36 pm #537802
My own comment on the original article. It's a complete waste of time and renders them useless for historical study.
Cyclist liked this
The pain broke me, brotherhood relieved me, and from my wounds sprang a river of freedom. (Paul Dorey)
Inscription on the Mémorial de la Paix, Caen.
How soon we forget.

Arnold wrote: ↑
Fri Mar 23, 2018 3:31 pm
I don't understand why anyone went to the trouble of colourising 1970s photos that were taken in black and white by choice. Why not use real colour photos?

Because "shiny shiny!" attracts the easily amused.
"They say that the cream rises to the top. But so does scum."

Bill, Manchester, 8 minutes ago
How pathetic. They should learn. Do they find this one thing difficult? No wonder the older generation think we are more intelligent. We had £.s.d., florins, half crown, halfpenny, sixpence and it was out of circulation when I was a kid but we had the farthing, we had cwt, lbs and oz., quarts, fathoms, chains, furlongs, no calculator but logarithmic tables. Nothing in easy tens like now.

I don't know how old Bill is, but I'm sure he never actually used chains or furlongs.
They fuck you up your mum and dad,
But not as much as Brexit will.

I notice awkward measures like pecks and bushels are omitted from his list though...
I know I ain't common 'cause I got class I ain't never used yet.

"My car gets 40 rods to the hogshead and that's the way I likes it!"

IMO only a masochist would return to almost everything using imperial measurement and the apparent arbitrary nature of how many times of a thing equal a thing. I'd have doubts few people under 45 or so would be familiar with imperial units beyond feet & inches, stones, pounds & ounces (even ounces are on slightly dodgy ground), and miles. Even these days I prefer to think in metric in that I quote my height in m & cm, weights in k & g and even distance & speed in km/h.
"They say that the cream rises to the top. But so does scum."

Another day of rage at the millennials and youth.
The educated differ from the uneducated as much as the living from the dead. Aristotle 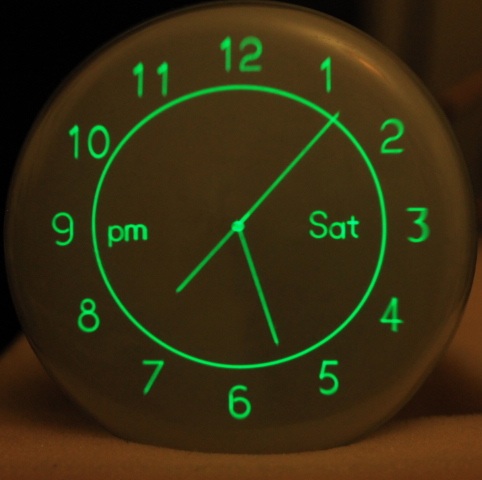 Based on a cathode ray tube, it can do digital displays as well.
I know I ain't common 'cause I got class I ain't never used yet.

There's a Gebrüder Resch Vienna in my main studio / living space; twin weights, 8-day movement, minimal crazing on the dial and altogether rather good for around 1880.

The mantel clock in the kitchen is a Junghans. It's a seven dayer in an oak case with brass strapping that is decidedly Darmstadt in looks from the Jugendstil-Art Déco transition and has been ascribed to Behrens, although it is difficult to be certain.

I was taken too by the ships' clocks with Soviet inscriptions that are to be found on the flea markets in Tallinn. Proud wee fuckers and no more than 20cm in diameter. There are those in baby blue casings and others in a deep crème but the really gorgeous ones (I saw two) are in chrome and come in at around €120.

I regret not taking a close look to see if they are repro - a Baltic hangover and horology make uncomfortable bedfellows - but the truth is that I would have probably baulked had they been knock off. That would have been a mistake. A thing of beauty is a thing of beauty.
Jack believed in the inherent goodness of humanity, and felt a deep social responsibility to protect that. Through us all, Jack marches on.

-  Wed Apr 25, 2018 10:08 pm #541213
Chez Boiler, the clock in the living area is a Smiths Electric Westminster chime/strike from the early 30s. There are others, most notably on the landing a small electric clock that is part of a 1930s Mains Radio Gramophones Ltd. combined radio and grand-daughter clock.
I know I ain't common 'cause I got class I ain't never used yet.

-  Thu Apr 26, 2018 12:35 am #541219
The brother has a lovely set of 1940's impulse clocks up in his house, a big 400mm monster in the kitchen and various smaller slave units around the house, sourced from various defunct railway halts in the area. The timing signal is sourced from a Raspberry Pi, and they've got various secondary functions (temperature readout, heating timer display etc) available via a phone app. It is outrageously clever, and makes me hate him slightly sometimes.
Ní uasal aon uasal ach sinne bheith íseal: Éirímis


When life WAS a beach! Amazing pictures show carefree scenes on forgotten stretch of sand which lay right in the middle of London 84 years ago
http://www.dailymail.co.uk/news/article ... ondon.html

Steve064, London, United Kingdom, 12 hours ago
You don¿t have to go back 84 years to remember a care free London. Go back less than 25 I was a young teenager my cousins and myself would spend many days visiting all the sights and unaccompanied by our parents. And we didn¿t have a care in the world, these days I won¿t even allow my girlfriend to go into the centre unless I or her friends are with her. Beginning to think she is right it¿s maybe time to give up my love affair with our once proud Capital.
+456 -20

Reality Bites, Warwick, 9 hours ago
Hideously white, the elites soon put a stop to that.
+364 -45

BiIb0, Hobbiton, United Kingdom, 3 hours ago
This waa London. This was my capital city. This was my inspiration and these were my people. Not the seething tumour riddled with disease and disharmony that they changed it into without asking a single one of us.
+327 -14

pkvanderbyl, rhodesia nottinghamshire, United Kingdom, 4 hours ago
When Britain was a proud and independent nation bestriding the world. Now look at London, filthy, crime ridden, locals driven out their own homes by left wing political correctness and dogma. Shameful that a one great city is now such a cess pit.
+298 -17

tahini, taif, Saudi Arabia, 3 hours ago
It looks so nice and pleasant there, such a far cry from the current kingdom of Khan.
+169 -3

Weirdo85, London, United Kingdom, 2 hours ago
The London my Nan spoke of so beautifully..the London she missed when it became what it has. Even after the war the sense of community was still there and the poor got on with it. People will never understand how sad it makes them to see what it has become. Our identity all but gone.
+148 -2

Wabberwabber, Not The Isle of Wight, United Kingdom, 2 hours ago
Funny how b la /c kp eople are always telling us they have been here for thousands of years (lies) but when you see old photos there are never any in sight.
+95 -24

Idiots, and some very nasty alt right tone to them too.

-  Tue Jul 24, 2018 9:50 am #549418
He missed an obvious trick with his user location to make a serious point about immigration. It's wonderful that he's so daft he didn't spot this glaring mistake.
We are the angry mob, we read the papers every day.
We like who we like, we hate who we hate, but we're all so easily swayed.

Priti Patel must be the first person to have been […]

Yesterday Boris made it clear that getting a trade[…]

This is rather excellent. https://medium.com/@[…]