In the dock again!

-  Wed Apr 16, 2014 10:02 pm #367191
Good for Rowling. We said at the time it was utterly stupid for the Mail to go after someone who has demonstrated more than once that she won't accept this sort of conduct and can afford to take them on.

But Dacre plainly absolutely hated having to accept liability. The judgment shows that the DM's unfortunate lawyers made desperate attempts to stop Rowling's lawyer making an open statement based on the fact that the article meant what we all read it to mean, and indeed what they clearly intended it to mean - i.e. a blatant allegation that she had lied about her time as a single mother and had lied in a particularly cruel way about people in the church who had helped her. Even though the Mail's Offer of Amends could only work if they accepted that the report was false and libellous, they did everything they could to argue otherwise, spinning the whole thing out totally unnecessarily along the way.

On 21 October 2013 the Claimant complained by letter of words published by the Defendant in hard copy in the Daily Mail and on online in MailOnline on and after 27 September 2013. The titles were similar. In the online copy it was "How JK Rowling's sob story about her past as a single mother has left the churchgoers who cared for her upset and bewildered".

Attempts to resolve the dispute by letter were unsuccessful. The Claimant proposed an early determination of the issue of meaning by a retired High Court Judge. On 4 December the Defendant dismissed this proposal on the grounds that: "The fact that the article is not capable of bearing the meaning you put forward, or any defamatory meaning, means that it falls at the first hurdle".

The Claimant issued her claim form on 10 December 2013 with Particulars of Claim dated 18 December. The meaning which she attributes to the words complained of is a natural and ordinary meaning as follows:
"the Claimant had given a knowingly false account of her time as a single mother in Edinburgh in which she had falsely and inexcusably accused her fellow churchgoers of behaving in a bigoted, unchristian manner towards her, of stigmatising her and cruelly taunting her for being a single mother".

On 8 January 2014 she issued an application notice applying for a determination of the issue of the meaning of the words complained of. On 21 January 2014, on the last day of an extension of time for service of a Defence, the Defendant made its unqualified offer of amends in accordance with the Defamation Act 1996 ss.2-4. It was an offer to:
"1. make a suitable correction of the words complained of and a sufficient apology…
2 publish the correction and apology in a manner that is reasonable and practicable in the circumstances; and
3. pay [the Claimant] such compensation (if any), and such costs as may be agreed or, if they cannot be agreed, as determined to be payable by the court".

Fortunately the judge was having none of it:

In a judgment released yesterday, Mr Justice Tugendhat upheld the right of Rowling’s lawyers to make a statement on her behalf without the agreement of the Daily Mail. And he said that the court would make a decision on the amount of damages (if no agreement can be reached between the two parties).

The resolution of the claimant's complaint, which was eventually admitted to be well founded, has taken far too long already."

Fortunately that little exercise will have added quite substantially to the costs that the Mail will end up having to pay. Given the way they and their followers regularly demand that individuals who cock up in the course of their employment should pay any damages themselves, I trust Dacre is shelling out for this one. 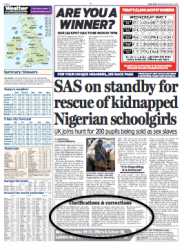 Wednesday's apology, at the foot of page 2, states:

"Our September 28, 2013 article 'How JK's sob story about her single mother past surprised and confused the church members who cared for her' suggested that JK Rowling made a knowingly false and inexcusable claim in an article for the Gingerbread charity that people at her church had stigmatised her and cruelly taunted her for being a single mother.

In fact Mrs Rowling recounted only one incident where a visitor to the church sitgmatised and taunted her on a particular day. We accept that Ms Rowling's article did not contain any false claims and apologise for any contrary suggestion and have agreed to pay substantial damages to Ms Rowling, which she is donating to charity."

I wonder whether the journo responsible gets kicked around the offices for forcing Dacre into that position, or credit for having produced a totally fictional smear article in the first place? I have a depressing feeling that it's the latter.

That's £3m on top of the £65K aggravated damages and the obligation to print an embarrassing retraction.

They're very grumpy about it:


Keith Mathieson, lawyer for the Mail, sent an email this week to Miller refusing further redress.

“Indeed, it has arguably gone further than required. We can see no basis for requiring the Mail to report the outcome of ANL’s unsuccessful application to the supreme court and it does not intend to do so.”

And Miller is still going after them, taking that one to Ipso.

I do enjoy it when they try to bully someone with deep pockets.

http://zelo-street.blogspot.co.uk/2014/ ... attle.html" onclick="window.open(this.href);return false;
Don't give me the Star Trek crap. it's too early in the morning.

Let's hope it was expensive - especially as Madonna plans to give the damages to a Paediatric Surgery Institute in Malawi. It's got to hurt Dacre that the money is going to help dreadful brown people.

“Their actions could, in her view, have threatened the integrity and/or outcome of the adoption process which would have had potentially life-changing implications for the girls, as well as for Madonna and her family.”


Hmmm. Might be wishful thinking, but I suspect that's going to be a pretty damn substantial payout. Lovely.

Dacre still hasn't learnt to not fuck with people who have the resources to take you to the cleaners. I think his ego and arrogance is preventing him from learning this lesson or he see's it as a worthwhile expense when one of them bite back. I wish more of them would do it.

-  Thu Jul 27, 2017 2:36 pm #514673
... and the fearless BBC report the defendant as Associated Newspapers. At least they covered it.
Jack believed in the inherent goodness of humanity, and felt a deep social responsibility to protect that. Through us all, Jack marches on.

Just as if anyone complains about him, he can't lose. Because his only loyalty (he will say) is to his readers. Thus:

An article published in Katie Hopkins' column on 5 February 2017 reported that Jackie Teale, a teacher, had taken her class to a protest against Donald Trump outside Westminster. We are happy to make clear that that statement was wrong. It was in fact a banner made by some of her twelve-year-old pupils which she took to the protest. We apologise to Ms Teale for this error and have agreed to pay Ms Teale substantial damages and legal costs.

I'm conflicted about Hopkins being sacked. On on hand she's an evil troll, on the other she kept costing the Mail an absolute fortune in libel damages.
"The architectural style is early maniac" - Vila Restal

-  Tue Nov 28, 2017 7:47 pm #526403
Fox sends throughts and prayers.
The Mail sends substantial damages and costs.
The educated differ from the uneducated as much as the living from the dead. Aristotle

Starmer pushed for a circuit breaker for 2 weeks, […]

Give me an EU passport and a year's guarante[…]