Re: Corrections and clarifications!#466292

Scum @DailyMailUK called me a spiv.My lawyers made them pay £20k and make a retraction.I'll donate the £20k to GOSH 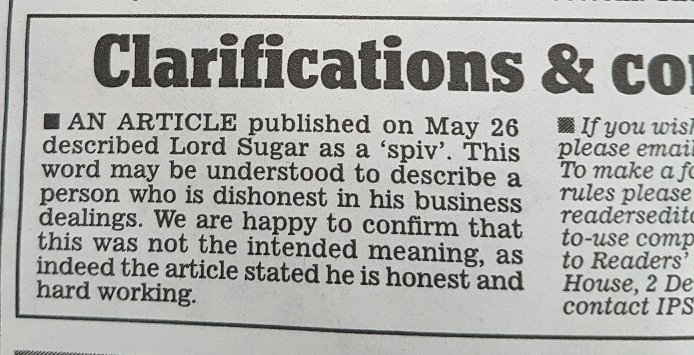 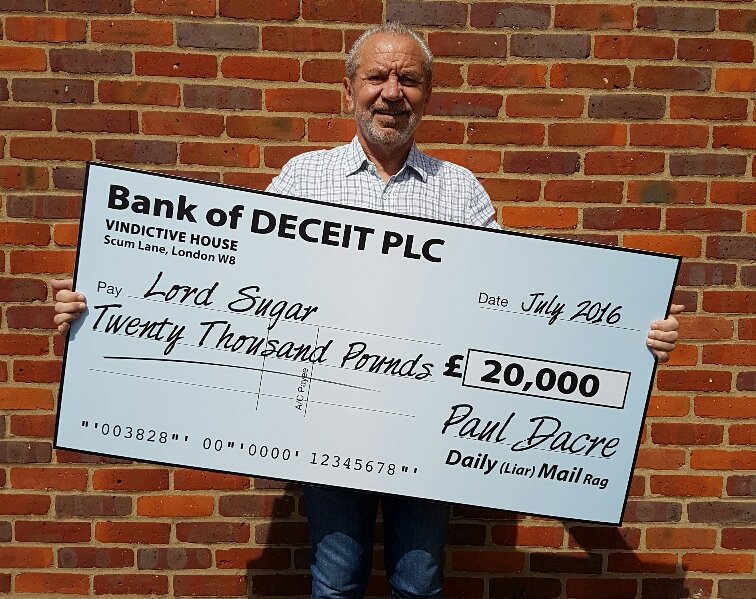 Re: Corrections and clarifications!#466311

Re: Corrections and clarifications!#469002

An article on July 13 said that businessman Alisher Usmanov is the owner of Arsenal Football Club and made his fortune from oil. We are happy to clarify that Mr Usmanov is co-owner of Arsenal and that, in fact, his wealth came from metals, mining, telecoms and the internet.


An article on May 29 suggested Anthony Bailey had made an amendment to a letter from the Prime Minister before it was read out at a banquet Mr Bailey was hosting for the President of Hungary. We would like to make clear Mr Bailey made no such amendment and are happy to set the record straight.

http://www.dailymail.co.uk/home/article ... z4EwZ8kWbt" onclick="window.open(this.href);return false;
They fuck you up your mum and dad,
But not as much as Brexit will.

Re: Corrections and clarifications!#469005

Ipso ordered Mail Online to publish its adjudication on the case in full on its website with a link on its homepage for 24 hours.

https://www.theguardian.com/media/2016/ ... -miscavige" onclick="window.open(this.href);return false;
They fuck you up your mum and dad,
But not as much as Brexit will.

Re: Corrections and clarifications!#470344

A diary article of 22 June 2016 alleged that singer James Blunt had knocked on the door of a neighbour to borrow money for a taxi fare and had then failed to repay the money. Mr Blunt has informed us that he was not involved in the incident at all and we are happy to accept that this was a case of mistaken identity. We apologise for the misunderstanding.


An article on May 3 incorrectly stated that former diplomat Sir Sherard Cowper-Coles had resigned as Ambassador to Afghanistan after fathering a child with Jasmine Zerinini.
In fact, their child was born three years after this posting had ended and 18 months after he had retired. We apologise to Sherard and Jasmine Cowper-Coles for the error.


The first edition headline on an article on May 27 about the funding of the organisation responsible for a controversial referendum advert referred to the Joseph Rowntree Charitable Trust as a 'pro-terrorist charity'. We are happy to make clear that the JRCT does not support or fund terrorism. We apologise for the error. We are also happy to clarify that, while the JRCT is one of two organisations providing core funding to Operation Black Vote, it had no prior knowledge of the advert and did not pay for it.

http://www.dailymail.co.uk/home/article ... z4G1PMBenV" onclick="window.open(this.href);return false;
They fuck you up your mum and dad,
But not as much as Brexit will.

Re: Corrections and clarifications!#474307


On August 20, 2016, an article was published in the Daily Mail newspaper titled 'Racy photos, and troubling questions about his wife's past that could derail Trump.'
The article discussed whether allegations being made about Melania Trump could negatively affect her husband Donald Trump's presidential bid. Among other things, the article noted that allegations have been made in a book available on Amazon about a modeling agency where Mrs. Trump worked in Milan being 'something like a gentleman's club,' and an article published by Suzy, a Slovenian magazine, alleged that Mrs. Trump's modeling agency in New York, run by Paolo Zampolli, 'operated as an escort agency for wealthy clients.'
The article, which was also published online by the Mailonline/DailyMail.com website under the headline 'Naked photoshoots, and troubling questions about visas that won't go away: The VERY racy past of Donald Trump's Slovenian wife' did not intend to state or suggest that these allegations are true, nor did it intend to state or suggest that Mrs. Trump ever worked as an 'escort' or in the 'sex business.'
To the contrary, The Daily Mail newspaper article stated that there was no support for the allegations, and it provided adamant denials from Mrs. Trump's spokesperson and from Mr. Zampolli.
The point of the article was that these allegations could impact the U.S. presidential election even if they are untrue.
Mrs. Trump's counsel in the U.S. and the U.K., have stated unequivocally that the allegations about the modeling agencies are false.
To the extent that anything in the Daily Mail's article was interpreted as stating or suggesting that Mrs. Trump worked as an 'escort' or in the 'sex business,' that she had a 'composite or presentation card for the sex business,' or that either of the modeling agencies referenced in the article were engaged in these businesses, it is hereby retracted, and the Daily Mail newspaper regrets any such misinterpretation.
The Daily Mail newspaper and MailOnline/DailyMail.com have entirely separate editors and journalistic teams.
In so far as MailOnline/DailyMail.com published the same article it wholeheartedly also retracts the above and also regrets any such misinterpretation.

Re: Corrections and clarifications!#474328

Do you suppose....
Some days, it's just not worth chewing through the leather restraints.

Re: Corrections and clarifications!#474333

Re: Corrections and clarifications!#474335

DMGT's share price was off by almost 2% in the earliest trading but has since clawed back much those losses.

It might be a little premature to start cartwheeling.
Jack believed in the inherent goodness of humanity, and felt a deep social responsibility to protect that. Through us all, Jack marches on.

Re: Corrections and clarifications!#474336

Re: Corrections and clarifications!#474337

-  Fri Sep 02, 2016 8:18 am #474337
Thing is, the Trumps are different. Most politicians and their families wouldn't sue a newspaper in the run up to an election, instead just saying "this is bollocks" and leaving it at that. The Mail looks like it's been lulled, as a result of this, into a false sense of security, but the Trumps give not a shit and have more money than they know what to do with, so will happily sue the arse off anyone at any time.
I could never die, I'm Chuck Norris.
Fuck the Government, and fuck Boris.

Re: Corrections and clarifications!#474338

Re: Corrections and clarifications!#474473

bluebellnutter wrote:Thing is, the Trumps are different. Most politicians and their families wouldn't sue a newspaper in the run up to an election, instead just saying "this is bollocks" and leaving it at that. The Mail looks like it's been lulled, as a result of this, into a false sense of security, but the Trumps give not a shit and have more money than they know what to do with, so will happily sue the arse off anyone at any time.

That's a shame....
The educated differ from the uneducated as much as the living from the dead. Aristotle

Re: Corrections and clarifications!#474474

-  Fri Sep 02, 2016 5:29 pm #474474
Not to put a downer on it but (I think) Trump is quite notorious for threatening to sue people all the time but often not actually going through with it. Hopefully his wife has more bite than bark if that is the case.

Re: Corrections and clarifications!#474598

-  Sun Sep 04, 2016 8:50 am #474598
I like the way they put the blame on people misinterpreting their article. Yes, that would be people drawing precisely the conclusions that the Mail intended and wanted them to draw.

Johnson is claiming that he is the first Europea[…]

This bodes well for UK citizens living in EU cou[…]