-  Sat Jul 04, 2015 5:15 pm #419576
How different is Utley's retirement going to be apart from not having a few hours in the spare room writing his column once a week. I'm sure he can spend more time on his favourite hobby, going to down the park to spot the benders.


Deep in thought, the parents of 7/7 bus bomber Hasib Hussain stood by their son’s grave yesterday to remember the boy they still love.

To the outside world the 18-year-old will always be an evil suicide bomber responsible for murdering 13 innocent people on a double-decker bus in London’s Tavistock Square.

But his family appear to have ignored the terrible circumstances of his death ten years ago by mourning his passing as if he were a victim himself.

Hussain was a terrorist who killed many. But he was still their son. They knew nothing of what he was going to do, they never got a chance to say goodbye. They are not "ignoring" the circumstances - I'm sure they feel deep pain at the circumstances of their son's death.


But the shame of having such a notorious terrorist in the family appears to have had little impact on the Hussains, who have remained in the same house, quietly going about their business.

As opposed to doing what...?


Factory worker Mahmood and his wife Maniza, an interpreter for Asian families at Leeds General Infirmary, have three other children apart from Hasib.

Eldest son Imran, his wife Shazia and their two children continued to live with them after the atrocity.

Daughter Asiya has married and settled nearby with her three children. While their other daughter Alia sparked a family scandal by running away with a Sikh lover

You know, in case you want to hurl abuse at them, this is where you can find them.

I find the picture particularly disgusting. A long-lens photo of a man standing at his son's grave in private grief is a little too intrusive, regardless of who his son was.

an interpreter for Asian families

Also known as "an interpreter".

ETA: To be fair, the Mail is getting a proper kicking in the comments.


Up North, UK, 1 hour ago
I find it quite disgusting that the bodies of the murderers are returned to their families instead of just being incinerated!

They'd think twice about strapping bombs to themselves if that happened!

-  Wed Jul 08, 2015 8:33 am #419904
Shades of Stewart Lee on the death of Bin Laden there. "'They should have strung him up on a roasting spit in Times Square and blown him up so he could have seen what it felt like...' ... 'His corpse should have been laid out on the White House lawn and repeatedly fucked by gay porn stars...' - and the shocking thing there is that I only made up half of them. But you're never going to know which half."
"There ain't nothing you fear more than a bad headline, is there? You'd rather live in shit than let the world see you work a shovel."

Hussain’s parents have never spoken publicly about the atrocity their son was responsible for and they rarely even answer the door to unexpected visitors.


The father was a victim whether you like it or not DM. Is he not allowed to grieve? It's not like he made a public display. Looks like some loser sat in the bushes for hours with a telephoto lens waiting for him to come along! Gutter journalism trying to divide communities. Plus ca change,eh? 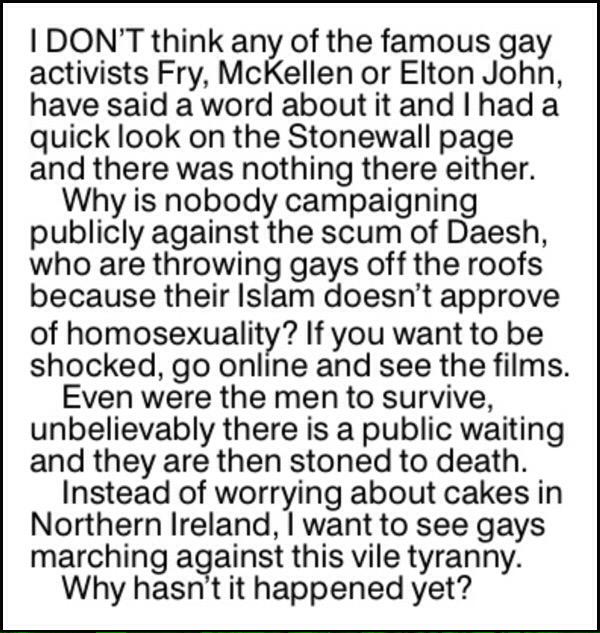 Found that on this site with Mailwatchers will enjoy

Pretty much sticking a target with "hate and abuse me" on their backs.
"Highlander was a documentary and the events happened in real time" - Master Shake

Another possibility is that they may have very strong views, but they're not being reported.

Or they may think it's pretty much taken as read that Stonewall don't approve of IS, and don't think it's necessary to say it. But of course, MacKenzie prefers it when minorities are made to vociferously assert their support of the party line, like a subscription to society.

Or they may think that while it's highly unlikely a gay Briton will get thrown to his death, they may just be affected by stuff going on in this country?

Or - final one now - they may not give a tuppenny fuck what Kelvin MacKuntzie thinks.
"There ain't nothing you fear more than a bad headline, is there? You'd rather live in shit than let the world see you work a shovel."

Just because discrimination is worse in a lot of the Islamic world doesn't mean they should ignore "lesser" discrimination closer to home. Which is the rather pathetic motive behind that scrawl.

-  Thu Jul 09, 2015 3:06 pm #420029
It's on a par with 'Clear your plate, there are starving children in Africa'. Or, perhaps more accurately, 'Quit whining or I'll give you something to really cry about!'.
"There ain't nothing you fear more than a bad headline, is there? You'd rather live in shit than let the world see you work a shovel."

youngian wrote:
Found that on this site with Mailwatchers will enjoy

This must be one of us. Maybe I have been pissed-posting again? One by one, these otherwise and hitherto untouchab[…]