I am not sure that protest is an effective way of dealing with the intellectual cowardice that is denial.

Short wave radiation, in or near the visible band, passes through the earth's atmosphere. It heats up the earth and is reflected towards the atmosphere as longer wave radiation that is stored as heat by greenhouse gases. We have known this for over 100 years now.

How do you protest against stupidity?

-  Thu Apr 25, 2019 8:04 am #573191
16-year-old Greta Thunberg is a bit of a rising star who has been speaking out very eloquently against the damage being done to our planet. Naturally the Right wing have now set their sights on her. Toby Young yesterday accused her of coming from a family of privilege (seriously!) and the usual gobshites have found it acceptable to start slagging her off.


The 16-year-old EVERYONE wants to meet: How politicians from Corbyn to Bercow are falling over themselves to praise Swedish climate activist as she meets MPs - minus Theresa May - for chats in the Commons
https://www.dailymail.co.uk/news/articl ... trike.html


STEPHEN GLOVER: I admire young Greta’s idealism - but why DO our fawning politicians lose all reason over climate change?
https://www.dailymail.co.uk/news/articl ... hange.html

spreadator, oxford, United Kingdom, 2 days ago
She needs to attend school and stop interfering in the UK which is doing far more than many countries to reduce carbon emissions!
+8699 -787

we44, NewcastleOnTyne, United Kingdom, 2 days ago
This schoolgirl needs to go back to school. Her parents must be mortified she's declared herself as an "activist".
+5318 -517

Atheist, Arknsaw, United Kingdom, 2 days ago
Do it in the school holidays or weekends, let's see how much interest there is then.
+3781 -200

Vulcanman, Somewhere in darkest Lincs, United Kingdom, 2 days ago
And how did she get to UK last week, and how big was the carbon foot print? Talk to people through tele conferencing rather than adding to the carbon emissions.
+3221 -169

MrBarkingMad, Hull, United Kingdom, 1 day ago
And this is why all my bills have skyrocketed. Listening to these loony left eco warriors will bankrupt the people of this country. Don't listen to a 16 year old, for goodness sake.
+1163 -58


And then in classic tabloid rag fashion they act all surprised by the vitriol that they fuelled:

Greta Thunberg's mother says her family have received threats and have become HATE-FIGURES as a result of her daughter's newfound fame as a climate change campaigner
https://www.dailymail.co.uk/news/articl ... -work.html

Rainingagain, Yepp, United Kingdom, 17 hours ago
Scripted speeches she doesn't know the first thing about climate change , and all the VIPs, and mp's clapping like seals because they think they should , laughable really
+1257 -59 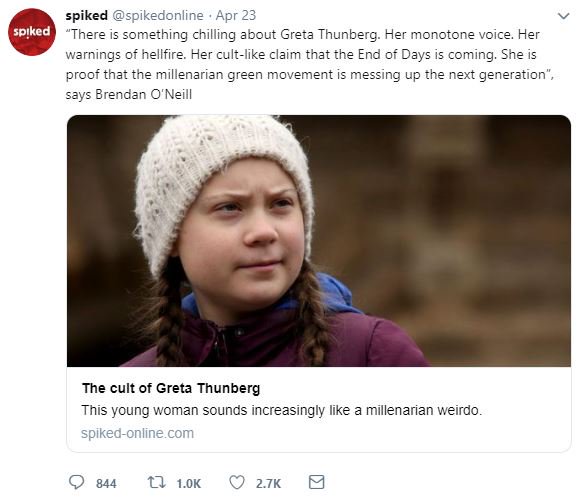 GRETA Thunberg is in some ways an admirable child: Bright, engaged, passionate about her cause and inspiring to other kids.

What troubles us are the credulous adults fawning over her.

In Greta’s black-and-white view, climate change is frying the planet while wicked corporations cash in and lazy governments “don’t listen to the science”.

It’s simplistic nonsense. Governments try to balance tough environmental action with keeping people in jobs and families fed. The general strike Greta demands — or the end of air travel — would bring only chaos and hardship.

Britain is a world leader in emissions reduction. So why are Greta and her aides here lecturing us instead of China, India or the US? Simple. Most journalists won’t interrogate a girl of 16 over her well-meaning naivety.

But our endless supply of vacuous, needy politicians WILL indulge her.

And the grandstanding Commons Speaker John Bercow will welcome her to Parliament like she was Nelson Mandela instead of a wide-eyed kid too young to vote.

FOR once, Corbyn is right. No, not Magic Grandpa. It’s hard to imagine him being right about anything, except maybe by accident.

He’s a scientist who has doubts about man-made climate change.

And he attacked politicians – including his own brother – for taking any notice of the 16-year-old Swedish campaigner Greta Thunberg.

She is wrong about climate change, he said.

And he added: “Listening to an ignorant, brain-washed child is deranged.” 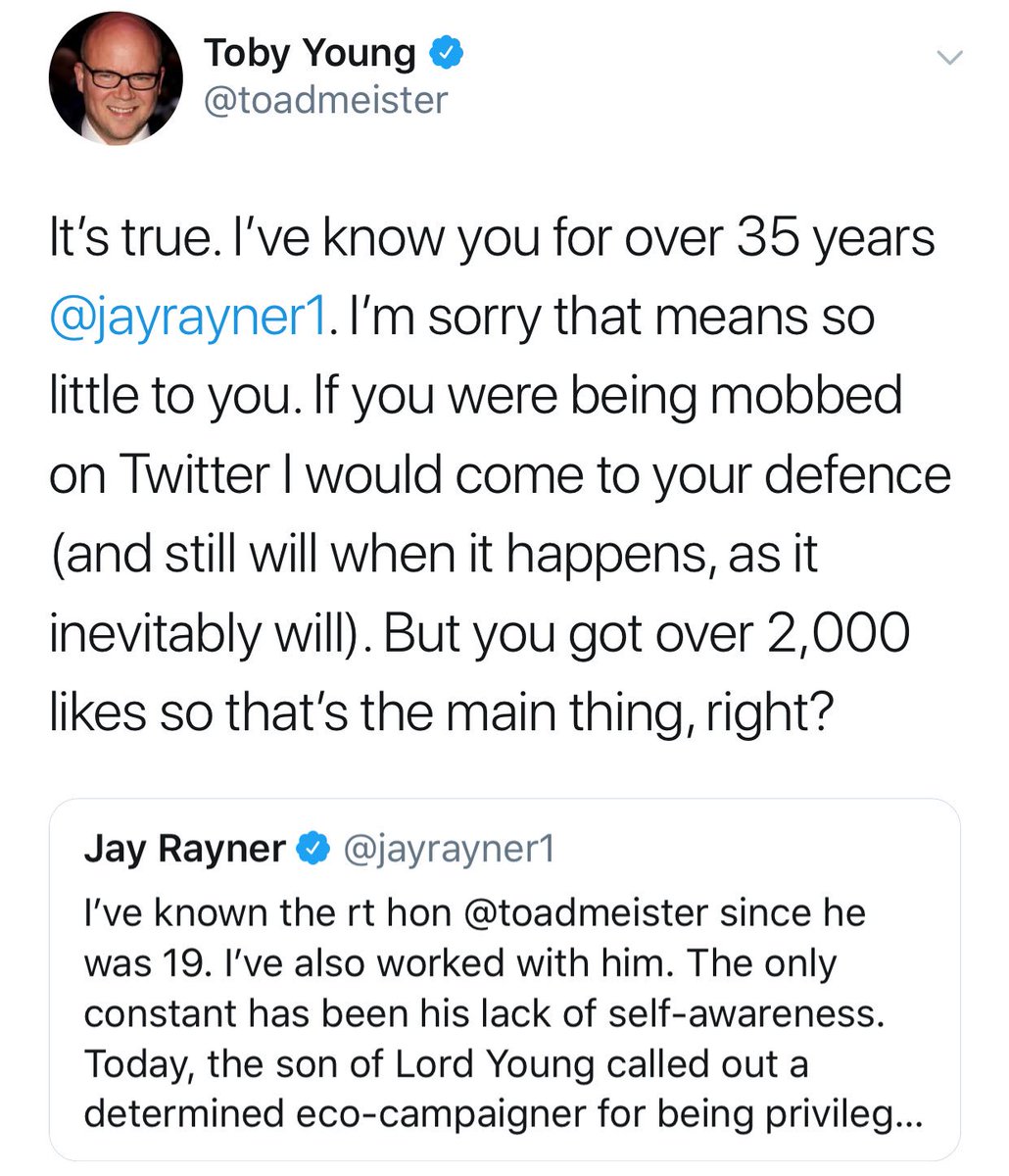 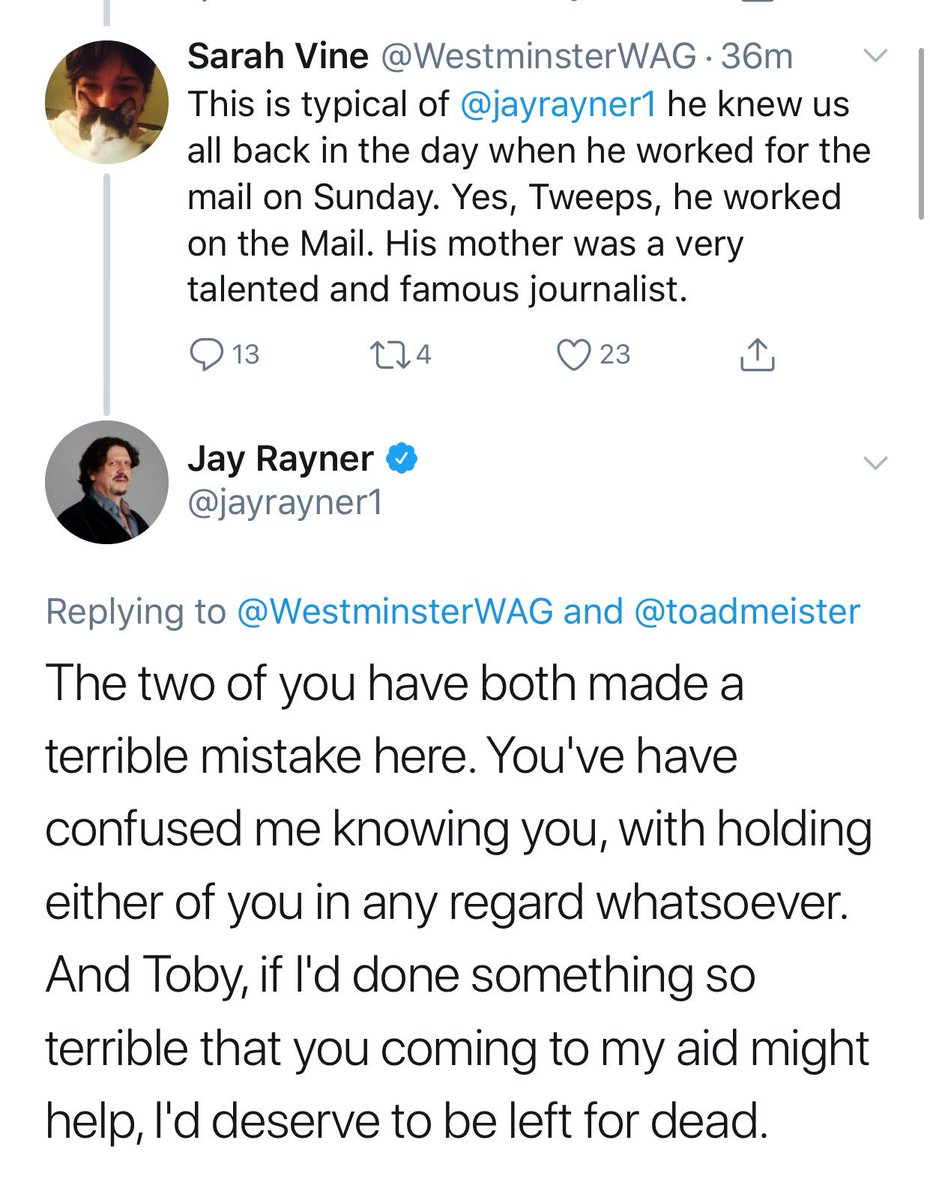 Look at fucking Vine trying to get in on the action and getting slapped right back down.

Thank god Bloom's only a pretend General.
The educated differ from the uneducated as much as the living from the dead. Aristotle

-  Thu Apr 25, 2019 2:48 pm #573237
I know it's not big or clever, but.........Geoffrey Bloom, the fucking useless cunt, can fuck right the fuck off.
This is what this pypmy brained country has come to, a 70 year old man who purports to have held positions of responsibility and influence sees it fitting to speak about a 16 year old girl in such a way
A fucking useless cunt who, in his 70 years, has done nothing to benefit society, but has simply leeched off it
Sorry, rant over ( and I've not had a drink either), but I've pretty well had enough of the brain dead
Safe_Timber_Man, youngian, Cyclist liked this
The world is not full of arseholes; but I always seem to encounter at least one a day!
Others?

-  Thu Apr 25, 2019 3:58 pm #573241
It's worth pointing out that those who are being so disrespectful to the girl are of the same generation that a lot of members demand respect from her generation as a God-given right.
spoonman, youngian, Watchman and 2 others liked this
"He's the leader of the gang. He's the top, he's the tip, he's the championship. He's Top Cat. And he's scum!"

Biggus Robbus wrote: ↑
Sun Apr 21, 2019 1:51 pm
Well climate science is hard. Oh how the deniers have used that to their advantage.

I am not sure that protest is an effective way of dealing with the intellectual cowardice that is denial.

Short wave radiation, in or near the visible band, passes through the earth's atmosphere. It heats up the earth and is reflected towards the atmosphere as longer wave radiation that is stored as heat by greenhouse gases. We have known this for over 100 years now.

How do you protest against stupidity?


They used to tell us there was going to be a new ice age, what do scientists know? Michael Fish the hurricane blah blah. I wish I could find the Newsnight clip of two thick old Brexit biddies who dismissed all BoE reports they'd never read because "they don't know any more than I do."

Someone on Twitter demanded that Ofsted inspect the School of Hard Knocks; 'Everyone I've met who attended is a massive fucking bellend.'