'Her politics are an issue': Diana's friend Lady Colin Campbell claims Meghan is struggling to bond with some of Harry's friends because of her 'trendy lefty' views
https://www.dailymail.co.uk/femail/arti ... views.html

PB, Atlanta, United States, 13 hours ago
One thing you can tell from all of the gazillions of photos of Me-again is that she does not bond well with women. In most of the photos with Harry and other people, she's doing her "I'm so attractive" coquettish smile thing, and there are very few photos of her looking at all happy or close to other women. She got where she was due to her ability to manipulate men, and she has very few long-standing relationships. If she's isolated, it's completely self-created because she's so self-absorbed, attention-seeking, and phony.
+2232 -174

Forthesakeofit, Pluto, United Kingdom, 5 hours ago
She's not attractive, which is even weirder as to how she got to where she is. That jaw, those legs and those horrible hands that creep me out. She might be very charming?
+174 -21

Lord Brown, Essex, United Kingdom, 38 minutes ago
Have you see her feet the ugliest I have ever seen
+16 -2

Shropshire Farmer., Ludlow, United Kingdom, 13 hours ago
An American leftist who married a prince of the blood royal, enjoys the status that goes with it, but disapproves of everything about it - what an disingenuous hypocrite.
+1908 -63

Revealed: Meghan's mother Doria is 'set to get her own place in the UK so she can spend more time with her daughter' – and in preparation for 'grandchildren coming along. 24 Sep 2018

Meghan Markle's mother settles back in to LA after surprise visit to the UK amid rumors she is 'set to get her own place' across the pond. 26 Sep 2018

She's done what?! After all those rumors we started? Fuck! Tell Jan and Liz to spike their articles. Let's hope the bitch comes back.


What the fuck? It wasn't Meghan making a ridiculous fuss over closing a door, it was your own fucking employer.

Mrs. Rabbit, Georgia, United States, 6 hours ago
Seriously, does anyone think the rabid social climber ever wanted to be "down to earth"? And why does the U.K. need a twice divorced, unknown (bad) actress to progress the British monarchy?
+678 -145


This person cares WAY too much about damaging wooden floors:

Dwta25, berkshire, United Kingdom, 8 hours ago
So the Duchess of Soho was wearing a 4 inch stilettos on a sprung wooden gym floor is the biggest no no and would have damaged it. Why the hell didn't she check what the event she was going to and take her pumps. Also why didn't the host at Loughborough College tell her she could not wear that type shoe, god only knows. I hope she is not walking around in that type damaging any of the wooden floors in the buildings the tax payers own which the Royals use. I believe a study was done many years ago and the weight on the heel tip of the stiletto is similar to the weight of an elephant
+571 -54

This is news?
Were going to hell in a handcart, you couldn't make it up!

a close friend has revealed to DailyMailTV....

EXCLUSIVE: Meghan Markle 'demanded' her first husband sign a 'pregnancy contract' ensuring he would pay for a personal trainer, nutritionist and nanny so she could stay in celebrity shape after having his baby
https://www.dailymail.co.uk/news/articl ... shape.html


bettyboop, pineyvilleusa, 16 hours ago
No longer matters about her career because shes gave that up along with her family, country, religion, pets, friends for a rich man with her new job of making him look good - brings new meaning to the term feminism.
+10658 -536

Annie Duerre, LaPl, Norway, 15 hours ago
The more I read about this woman, the more I'm convinced she married Harry just out of convenience. She is trouble.
+7341 -378

Kezza81, Derbyshire, United Kingdom, 16 hours ago
She makes me laugh as she is always holding her belly. It's still tiny and she managed to hold off doing it before they announced It!
+5960 -197

Marla Singer, Support Group Tourist, United States, 15 hours ago[/i
]MM is built like a refrigerator with chicken legs. Pregnancy isn't going to do her body type any favors. And neither is being 37 or 42 or whatever age she is.
+1934 -120

Paper Rose, Nearest Garden, United Kingdom, 15 hours ago
She must be laughing at how gullible Harry is. If she'd sincerely wanted a baby she would have had one with her first or second husband. This contact idea shows how vain she is and not maternal. At all. Just gets her self knocked up as soon as possible to secure a lifetime payout. Can't wait for all this is crash down!!! Harry is a fool!
+1945 -72


Can't wait for all this is crash down!!!

How fucking vile and sad must your life be for you sit there getting exciting about the prospect of peoples marriage breaking up?

DailyMailTV has reached out to Kensington Palace for comment.

Yeah, good luck with that. Are they determined to get themselves blacklisted or something? They're going to desperately want all the details and exclusives when the Queen dies. This isn't the best way to go about it.

Working for the Duchess of Sussex must be one of the most glamorous jobs, so how surprising to discover that she’s apparently struggling to hold on to key staff members.

I wouldn't be surprised if theirs isn't the next royal divorce.


Getting up at 5am, bombarding aides with texts and her eyebrow-raising fashion: Palace insiders reveal how Hurricane Meghan is shaking up the Royals six months after the wedding


https://www.dailymail.co.uk/news/articl ... oyals.html
They fuck you up your mum and dad,
But not as much as Brexit will. 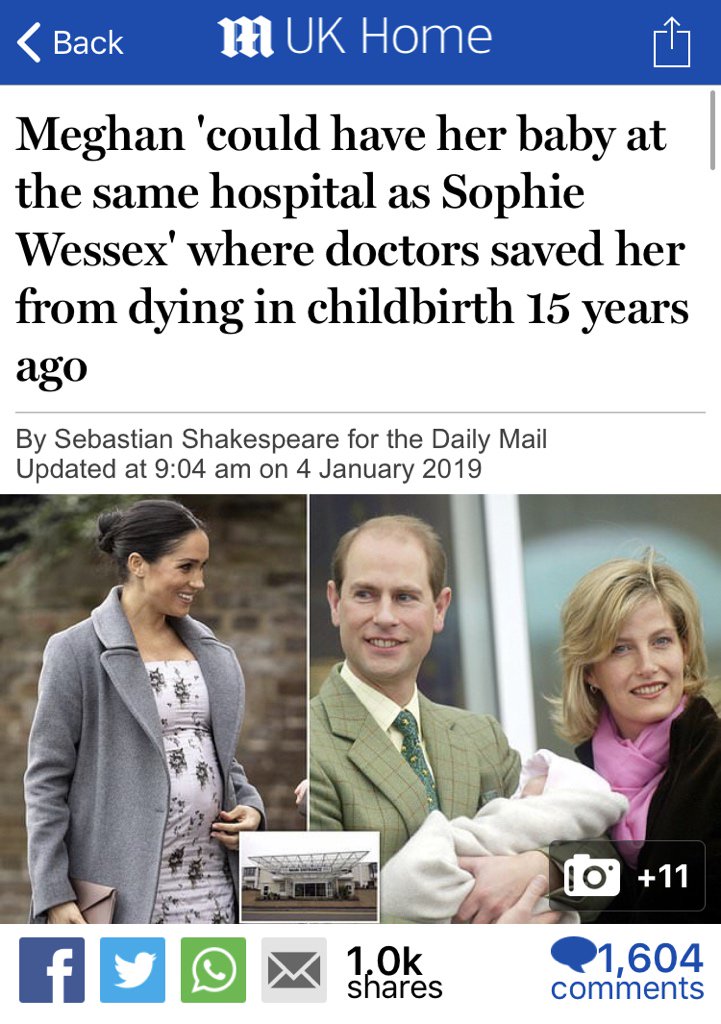 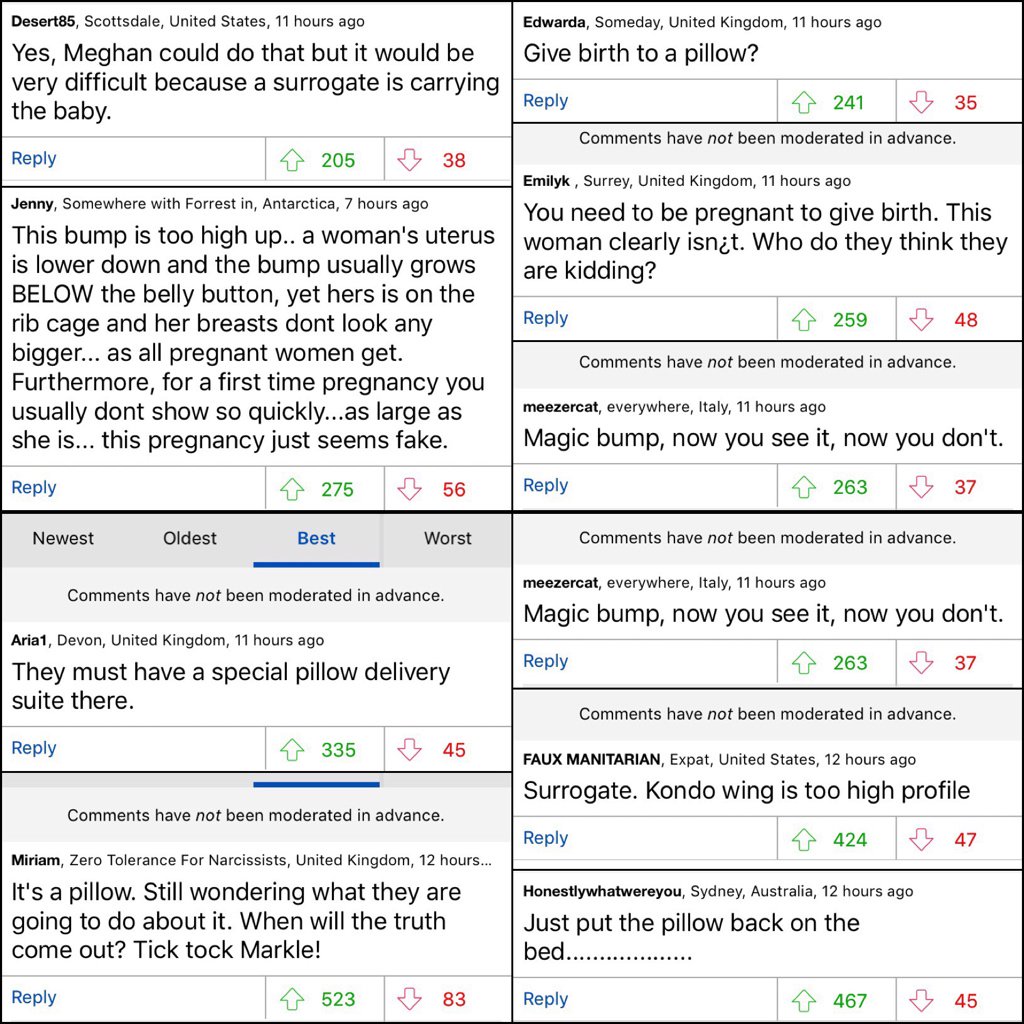 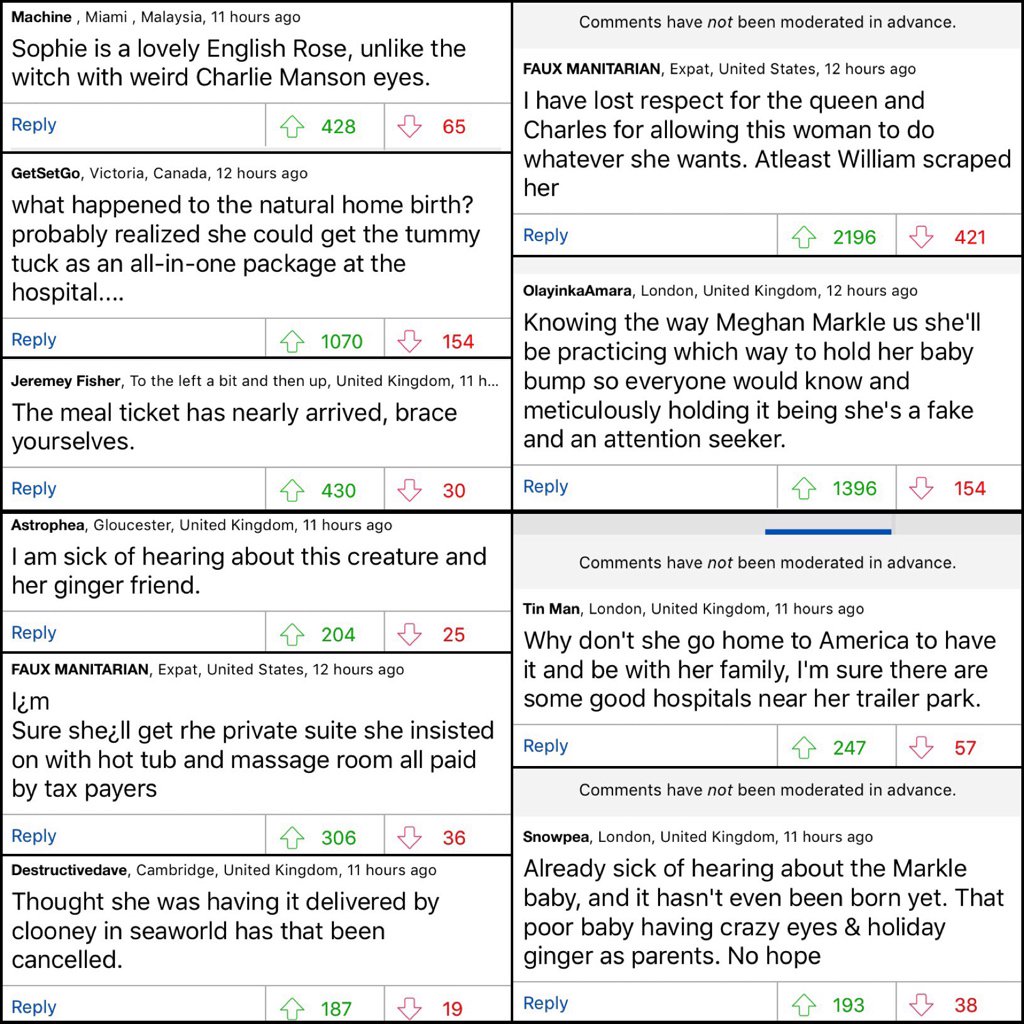 
Having said that, when Kate Middleton was the one to hate before they now like her by proxy of hating Meghan I do seem to remember them claiming Kate was faking being pregnant as well.

TALK OF THE TOWN: Why Meghan and Harry's baby may be denied the title HRH... and it's all down to the great grand parents!

What about names for the up coming sprog? Im all for Billy Bob if it a boy and Daisy Mae for a girl.

https://www.dailymail.co.uk/tvshowbiz/a ... e-HRH.html
They fuck you up your mum and dad,
But not as much as Brexit will.

Brexit has further addled their branez.
The educated differ from the uneducated as much as the living from the dead. Aristotle

-  Thu Jan 10, 2019 2:35 pm #563586
So much for Duchess Difficult! Insiders reveal Meghan is 'well-liked' by staff who are 'excited by her enthusiasm'- and her management style is VERY different from sister-in-law Kate's
https://www.dailymail.co.uk/femail/arti ... drive.html

The Mailites are not having this for a second. Just look at these arrow ratios!

Anne747, Glasgow, United Kingdom, 3 hours ago
Definitely her PR trying to cover her tracks, what's very telling about all the leaks on how she treats staff is that no one from their inner circle is sticking up for her, there also been reports from her pre Harry days were she was rude to waitors, people who had to work for her
+904 -52

Missnld23, London, United Kingdom, 4 hours ago
How much did you get paid to print this? Funny how your tune has suddenly changed...
+591 -25