The Duke and Duchess of Sussex have told the editors of British tabloid newspapers that they will never again deal with their outlets, in an unprecedented direct attack on a large part of the media that leaves little chance of repairing the relationship.
On Sunday night Prince Harry and Meghan sent a letter to the editors of the Sun, Daily Mail, Mirror and Express saying that from now on they would not respond to any inquiries from journalists working for the outlets. Instead there will be a policy of “zero engagement”, except when necessary through the couple’s lawyers.

Fucking yes! Of course it's unlikely to stop the regular stream of bilge emanating from the sewer, but one can only hope this is eventually going to end in some kind of ultimate showdown in the courts.
Cyclist, Samanfur, Oblomov liked this
'If there's anything more important than my ego around, I want it caught and shot now". Douglas Adams.

It's like one of those old movies, probably featuring Bette Davies or Joan Crawford where someone with dubious or sinister intentions tries to convince another person close to them they are insane, and it gets to the point where they almost succeed.

At that point though a third party who has their interests at heart usually intervenes and saves the day.
'If there's anything more important than my ego around, I want it caught and shot now". Douglas Adams. 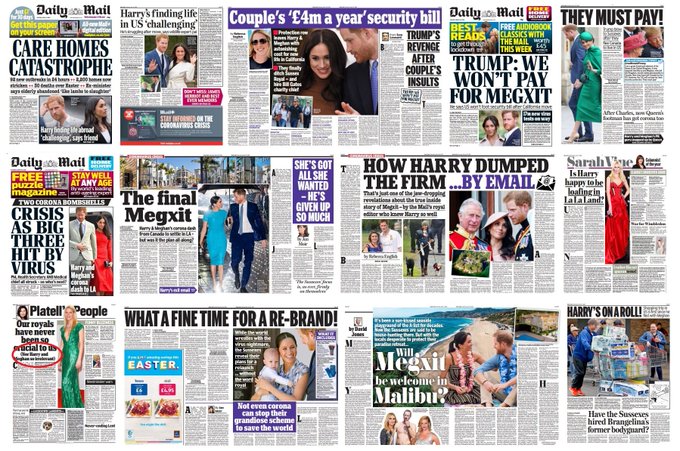 -  Mon Apr 20, 2020 11:36 am #606171
Of course, the tabloid that is missing from that list is the Daily Star. Now obviously it will be included, but I'd laugh until the lockdown ends if Hal and Meg are pictured on the front page of the Star tomorrow reading it and saying "it's the only one for us!"

The Mail would have an aneurysm.
Bones McCoy, lord_kobel, Snowflake and 1 others liked this
"He's the leader of the gang. He's the top, he's the tip, he's the championship. He's Top Cat. And he's scum!"

None of those stories needed any contact with Harry and Meg. Always happy to see the tabloids go ballistic but was this the right time for the couple to be making this announcement? Even Piers Morgan has his eyes elsewhere.

All be the Negress's fault (Obvs).
The educated differ from the uneducated as much as the living from the dead. Aristotle
Others?

-  Mon Apr 20, 2020 1:45 pm #606203
Roy Greenslade was just on News 24, adamant that it wasn't the press's fault they picked on the Sussexes, because the Sussexes act like they're "special people" who demand "special treatment" because they're royal (yes, I know *rolls eyes*), and've been so "prickly" with the press from the outset that "they're encouraging them to misbehave".

They're asking for it, basically. By being different (with the unspoken insinuation that good old Harry did as he was told before Lady Macbeth turned up).

The justification of the bullying thug throughout the ages.

The Sussexes are never going to stop being punished for being the royals who had the nerve to've had enough.
"It is the duty of a newspaper to comfort the afflicted and afflict the comfortable."
Others?

Fuck, if she loses the entire case she will get crucified.
'If there's anything more important than my ego around, I want it caught and shot now". Douglas Adams.


Mr Justice Warby said the allegations he struck out do not go to the "heart of the case", and that they may be brought back at a later stage if they are put on a proper legal basis.


MSM advised to work hard over parliamentary recess to keep covid and political scrutiny away from the public.
Obesity, royals, today is just the start of our summer propaganda whipping up hate and division.

Much like his hair contorting itself to cover his […]

I reckon her picture is precisely as big as who sh[…]

The bitterness oozes from their pores. There'[…]