Philip Marlow wrote:Liberals. Before the media was run by liberals, not lefties. It is an important distinction comrade!

Not to the moonbats who constantly push that narrative; leftists, liberals, Marxists, Metropolitan elite, they're interchangeable.

-  Wed Jun 18, 2014 9:42 am #374842
I actually spent most of my childhood in Blackley and that's a good article. I'm generally wary of the white working class framing - it seems to be the only way class issues can get a hearing in the mainstream media - and Blackley is a multiracial area (albeit not as multiracial as nearby Crumpsall or Cheetham Hill) but otherwise a very interesting piece. And this can't be repeated often enough:


Owen Jones, in his marvellous book Chavs, (“chav” is the derogatory British term for the white working class) tackles the notion that poor people milk the state more than the rich do. Some updated statistics:

• Total taxpayers’ support for British banks peaked after the banking meltdown at £1.2 trillion.

• Even if this is a massive underestimate, and the real cost of benefits fraud is three times higher, it would still be just one-sixth of the sum lost in unpaid or avoided taxes in 2011/2012, by the government’s own estimate.

• That estimate doesn’t take into account the puny British tax bills of companies such as Starbucks, Amazon and Google, or of resident non-domiciled billionaires.

-  Wed Jul 16, 2014 3:11 pm #378246
Pitiful leader today about the reshuffle regurgitating Gove crap about giving headteachers real autonomy- which theyve had for 25 years. Much of his unpopularity down to the teaching unions, apparently, who are more influential than anyone thought in that case.

The FT until recently employed Chris Cook, about the only journo on a rightwing paper who wasn't dazzeled by Gove.

It asserts that Denmark (in ERM II but using Danish krone), Northern Cyprus (unrecognised country using Turkish Lira) and Kaliningrad Oblast (part of Russia using Russian ruble) are a part of the Eurozone.

Somehow the UK is not even contoured on the map.

Untitled.jpg (88.09 KiB) Viewed 6644 times
Timbo liked this
"Nationalism is an infantile disease. It is the measles of mankind." A. Einstein

Here is the Daily Mail congratulating them: 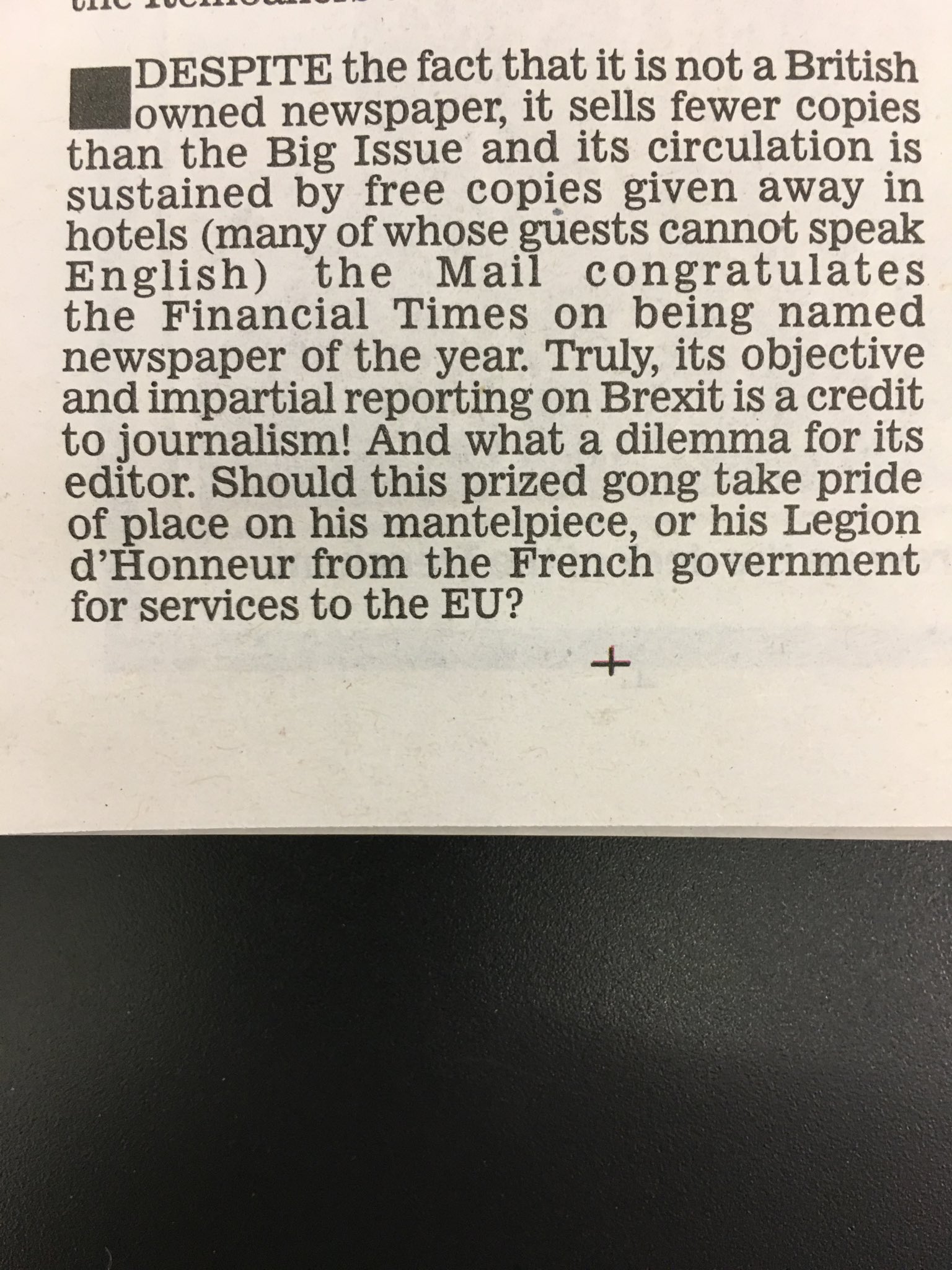 They really are snide, bitter bastards right to the core.

"Many of whose guests can't speak English"

Many of whose guests can't speak English

More like "many international business professionals, for whom English may not be their first language....just somewhere alongside their ability in French, German, Spanish etc"..............now go apply to Brexit Business skills!
The world is not full of arseholes; but I always seem to encounter at least one a day!

Despite the fact that it isn't a British owned newspaper

Does seem to be a constant on the right. Take th[…]

It’s not much use when you forgot everythi[…]

Washington Capitol building in lockdown due to a '[…]