Arrowhead wrote:I'm relieved to see there's actually as many as fifteen of them. I was starting to worry it was just Clarke, Soubry, and a couple of others.

They need a few more to counterbalance arseholes like Field, Stringer and Hoey but its a good start.

Up to 21 Tory rebels now against Mrs May's "Brexit Day law".
And two ministers have indicated they could resign next autumn if exit deal is bad for UK

Timbo wrote:Just a shot in the dark here, but surely these guys must have targeted some Tory MPs too, right?

if you want something more recent...


Some cynics are even suggesting that all this Corbyn bollocks is, in part, an attempt to lessen the impact of trans-Atlantic fallout from upcoming Mueller revelations - I couldn't possibly comment.
Timbo liked this
The Red Arrow is currently appearing in 'Ram it home, Mrs Henderson' at The Minack Theatre, Penzance


"Telegraph now selling fewer copies than the Daily Star" is what I took from that...

The sort of face-palming nonsense you expect to hear from thick alt-right types like Paul Joseph Watson of Prison Planet.

Now it's a 'serious' article in the Telegraph.


A history lesson for those who would smear the moderate Right: the Nazis were socialists
https://www.telegraph.co.uk/politics/20 ... ocialists/

I don't read the Telegraph at all but I have been seeing comments recently that they're starting to completely lose the plot.

It can be dismissed as more shite from Right wing rags but it's part of a worrying trend. Alt-right/racist/far-right language and memes now becoming used freely in the national main stream media. We've seen the "virtue signalling", "snowflakes" etc being used as standard language in the likes of The Sun and Mail and now we're seeing shit like this, too.
Others?

But your point is well made. Since the Tories kicked Leveson into touch, and indeed have encouraged the right-wing press in their growing hysteria, the gates of the pen have been opened and the animals are loose.
Do what you can, with what you have, where you are.

It's so bloody over-used, it's now a classic canard of right-wing fuckery. I suppose the GDR was democratic like Britain is, yeah? Ironically, the article itself is a sign the New Statesman might be on to something...

I read a few of the comments. Many were simply blind raging at Corbyn, not engaging with the article at all beyond 'New Statesman is wrong because they distract from Corbyn's woes' (as if the NS loves Corbyn...).

-  Wed Sep 26, 2018 9:22 am #555041
There was a small section of the Nazi party, in its early days, which did take the socialist side of their programme seriously. They were lead by Gregor Strasser, but they were eliminated during the night of the long knives.

Presumably, the socialist element of the programme was included by Hitler mainly as a means of gaining votes. The fact that he called it the “National Socialist” party is irrelevant. He could have called it Eric if he wanted to.
Were going to hell in a handcart, you couldn't make it up!

Put me in mind of that famous scene from the Day Today, "I'm trying to run a high class bureau de change here, not a two bit nipple peep show in Rio de Janeiro!".
"I've tried to think of something clever to say about Rod Liddle, but I think he's just a cunt." 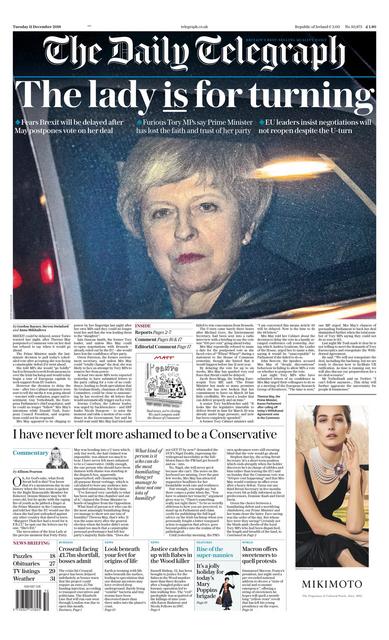 The nearest independent fuel station to me has 24h[…]

What a bloody disaster. https://twitter.com/Ian[…]

He was brilliant when banging on about his rather […]

It feels wrong to laugh at this given the circumst[…]