-  Mon Mar 18, 2013 11:21 pm #296811
I'm still struggling to understand why Cameron decided to push ahead with all this in the week that the Budget should really be taking centre stage. Did Cameron realise that the Budget was going to be so bad that he decided to press ahead with his Royal charter idea so that they could get all the shit out of the way in one week ready to start with a clean state after the Easter recess?
http://tiny.cc/tqugax


Mr Osborne’s windfall will come from the small print of the plan to introduce a single-tier pension at a minimum of £144 a week in 2016-17. The chancellor said on Sunday the new pension would be a “huge boost” for pensioners but did not add that associated changes would see steep rises in national insurance bills for employers and employees in final salary pension schemes. This was confirmed on Monday in a written statement by Lord Freud, the minister for welfare reform.

So generation that includes loads of people with very good pensions get a rise of, in the case of a single pensioner getting the basic pension now, £37 a week in 3 years (basic is £107 now). Sound public finances there. Poorest pensioners get a rise of £1.50 in 3 years. Fairness and all! 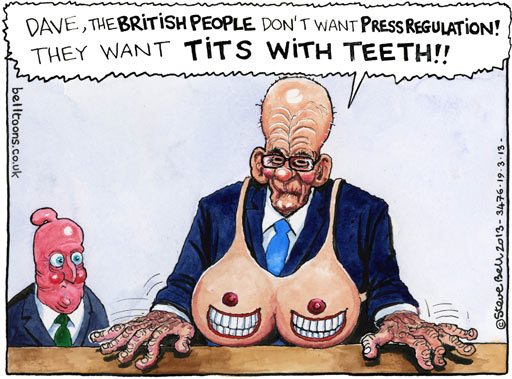 -  Tue Mar 19, 2013 1:13 am #296835
I'd forgotten about Hodges. His attack on this press deal is owing to his commitment to Civil Liberties and freedom of the press and not an excuse to bash Ed Milliband
Don't give me the Star Trek crap. it's too early in the morning.

Actually, have we heard from Blair yet? Maybe it'll be the day New Labour died. Again.

Dan Hodges so valiantly standing up for the freedom of others
Don't give me the Star Trek crap. it's too early in the morning.

Benedict Brogan probably thinks Cameron won the negotiations by 10 wickets, so he might think it's OK.

-  Tue Mar 19, 2013 12:32 pm #296893
I'm enjoying the Schadenfreude as much as anyone. Of course I know the Tory press are not born again civil liberty defenders but I'm still not clear what the limits of the Leveson proposals are and invoking Milly Dowler's parents doesn't sort that out in my mind.

I personally just want the print media to work under the same conditions as TV and radio journalists, who are accountable to a code of conduct regulated by Ofcom.

" onclick="window.open(this.href);return false;
Don't give me the Star Trek crap. it's too early in the morning.

http://www.progressonline.org.uk/2013/0 ... ce-stupid/" onclick="window.open(this.href);return false;
Don't give me the Star Trek crap. it's too early in the morning.

-  Tue Mar 19, 2013 12:55 pm #296904
Dan Hodges is reminiscent of that Claire Fox woman who used to pop up everywhere. Both describe themselves as 'progressive' which usually means rentaquote contrarian gobshite.

D'you think you know anywhere that has pumps tha[…]

HM Government "Get out and enjoy summer"[…]