When Cameron took over the Tory leadership in 2005, the party's support among Generation Y stood at 10%. It has since more than doubled, to 20.5%: when Osborne gets up to deliver his latest spending review and serve further notice that the state must be hacked back, and the economy must somehow be rebalanced between private and public, large numbers of young people will apparently be in full agreement.

-  Wed Jun 26, 2013 8:31 am #320702
It seems a bit disingenuous to say that "today's under-34s don't believe in handouts and high taxes – and they're voting for David Cameron", when he later goes on to tell us that support for the Tories among this generation is 20.5%. It's indeed quite depressing that there's been a big increase in support, but it still means that 8 out of 10 young people don't support them.

In any case, the figures Conservative support among "Generation Y" only go back to 1996 in the death throes of Major's government, it's more-or-less expected that support among every generation would have increased since then, surely.
I disagreed with the burglar’s policy, of tying me to a chair. But I did admire his convictions. 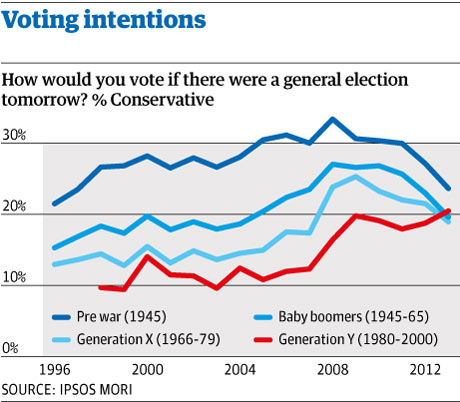 The Guardian needs to fuck off with this stuff.
Change does not roll in on the wheels of inevitability, but comes through continuous struggle.

I suspect he might get a slightly response if he went into Stoke or Newcastle-upon-Tyne to ask the young people what they think of Tories.
I disagreed with the burglar’s policy, of tying me to a chair. But I did admire his convictions.

-  Wed Jun 26, 2013 8:52 am #320708
I have to give Harris some dues for managing to get a whole book out of the complete tedium that was Britpop - the New Romantics for the 1990s. But everytime I read one of his political articles, I get to the end and feel a sense of total emptiness, like I've just read some random stranger's shopping list.
"Highlander was a documentary and the events happened in real time" - Master Shake

Anyhow Anthony Wells has put a piece out....

Waterstones wrote:The best day of my life will be when this White hating rag goes bust. 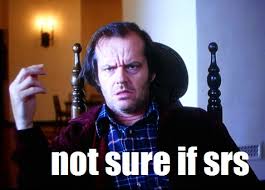 mattomac wrote:Regardless he is still cherry picking polling to fit a narrative and that's poor journalism.

Anyhow Anthony Wells has put a piece out....

See that, Toby? That's how you write an article criticising The Guardian. No mention of Laurie Penny or Owen Jones.

Amid the rest of the rubbish about how clever Danny Alexander is, I noticed this.


On the Today programme on Radio 4 on Thursday morning Balls found it hard to make his point that the whole spending review was the consequence of an austerity policy that had failed.

Instead he was cornered over whether he supported benefits being delayed by seven days before new claimants can apply for payments, replacing the current three-day wait. The reform will save a trivial £250m a year and may well be rendered even more trivial by the introduction of universal credit, a benefit paid monthly, in arrears.

That lefty BBC again. They might as well appoint Lynton Crosbie as head of news. "Ask about small item in budget and try and make Labour soft on benefits".


All sides say that Cable worked well with his Tory ministers two of whom, Matt Hancock and Michael Fallon, are close allies of Osborne.

One source said of the idea that they were sent in as Osborne spies: "That's a myth. Matthew Hancock is very committed to apprenticeship training, he didn't want Vince to give ground in that area."

Hancock's seen the number of apprenticeships fall this year. Must be that commitment of his.
Last edited by Tubby Isaacs on Fri Jun 28, 2013 2:17 pm, edited 1 time in total.

-  Fri Jun 28, 2013 2:17 pm #321326
To be fair, I caught that Today interview and Justin Webb mostly attacked Balls from the left. Balls was seriously unimpressive. It's really disappointing that the Labour leadership hasn't come out and just said 'look, this is a bollocks idea and needlessly vindictive'.
Change does not roll in on the wheels of inevitability, but comes through continuous struggle.

Waterstones wrote:The best day of my life will be when this White hating rag goes bust.

I might be a bit thick here but what does that mean?

Reply
Return to “Journalism & Blogs”
26 May

The thing is, if you were feeling off colour and w[…]

Actually mailboxes being robbed is another good on[…]

Whilst Boris is clearly very unpopular at the mome[…]