-  Sun Apr 10, 2016 11:20 am #452738
I wonder how that is playing with the electorate. No doubt many are appalled, but a lot will simply think 'lucky sod'. Just as they think that IDS' worst excesses were due to inattention, or Osborne drops budget clangers by mistake. See my sig line.
Mene, mene tekel upharsin, Johnson.

Hodges says Dave is only trying to protect his dear old mum.

This is very touching, indeed.

Of course neither he nor the Daily Mail had much sympathy for Ed Milliband when his father was the target of accusations:

Haven't being paying much attention to Hodges lately but that's a timely juxtaposition to remind us what a weaselly shitbag he is. And I thought he was Mr Realist who tells Labour to shape up and do what it takes to win. But no it's boo fucking hoo for poor Dave and his sweet old mum.

-  Sun Apr 10, 2016 11:57 am #452747
Excsept now it's MrTernan, Hodges and Tom Harris all stepping up to defend Dave.
I once asked Rupert Murdoch why he was so opposed to the European Union. 'That’s easy,' he replied. 'When I go into Downing Street they do what I say; when I go to Brussels they take no notice.'

-  Sun Apr 10, 2016 12:12 pm #452748
They're competing in the same market place of Labour insiders 'telling it like it is.' Only after they sending their CVs out to every left-of-centre party on the planet facing an election who decided they didn't need their services.

youngian wrote:They're competing in the same market place of Labour insiders 'telling it like it is.' Only after they sending their CVs out to every left-of-centre party on the planet facing an election who decided they didn't need their services.

Well Tom Harris on the website of his company Third Avenue wrote this back in September:

So much for putting the Labour Party first.

http://thirdavenue.org.uk/the-only-thin ... /#more-241" onclick="window.open(this.href);return false;
I once asked Rupert Murdoch why he was so opposed to the European Union. 'That’s easy,' he replied. 'When I go into Downing Street they do what I say; when I go to Brussels they take no notice.'


‏@DPJHodges
Labour's attack on Sports Direct, a company favoured by millions of Britons, is just what the party needs to turn its fortunes around.


The Unite officers said there have been 110 ambulance callouts to the warehouse, including 38 times when workers complained of chest pains. Five ambulances have been called to Sports Direct’s warehouse in birth and miscarriage related matters, including one worker who gave birth in the toilets.

MPs also heard that some Sports Direct staff are paid through a pre-paid card. Staff are charged £10 to get a card, plus a £10 a month management fee, 75p to use it at an ATM machine, and 10p when they get a text message confirming they have used it.

In December, an undercover Guardian investigation revealed that Sports Direct warehouse staff were required to go through searches at the end of each shift, for which their time is unpaid, while they also suffer harsh deductions from their wage packets for clocking in for a shift just one minute late.

The practices contributed to many staff being paid an effective rate of about £6.50 an hour against the then statutory rate of £6.70 – which potentially saved the FTSE 100 firm millions of pounds a year at the expense of some of the poorest workers in the UK.

https://www.theguardian.com/business/20 ... nimum-wage" onclick="window.open(this.href);return false;
Change does not roll in on the wheels of inevitability, but comes through continuous struggle. 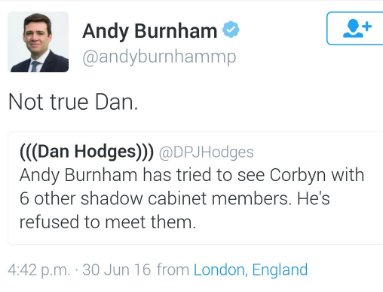 I'm beginning to warm to Mr. Burnham
I once asked Rupert Murdoch why he was so opposed to the European Union. 'That’s easy,' he replied. 'When I go into Downing Street they do what I say; when I go to Brussels they take no notice.'

Credit where it's due Hodges is on form today.


Our new Home Secretary had been billed in some quarters as the most liberal politician to hold the brief since Roy Jenkins. By the time Amber Rudd sat down on Tuesday afternoon, she was being compared by one senior broadcaster to the author of Mein Kampf.

A Tory home secretary who does deserve this accolade is Douglas Hurd. The home office is an 'only Nixon can go to China' posting.

What do they think they're doing? Seriously, what will it take to make our politicians finally understand? Strikes? Civil disobedience? A very British coup? Four months ago the British people did precisely what they were asked to do. They listened to the competing Brexit voices. They weighed up the arguments. And then they went to the polls – 33 million of them – and they delivered their verdict.

The liberal Left – unable to comprehend their world view does not extend beyond the M25 – have convinced themselves that Keir Starmer, the Shadow Brexit Secretary, will come riding over the hill on his white charger, flourishing a list of 170 questions for Ministers in one hand, and a pot of Marmite in the other.

What could be the root of such a jaded view?

When Ed Miliband – rejected by British voters in one of the most humiliating political rebukes of the modern era – stood up in the Commons and started lecturing the Government about having ‘no mandate’, what was he thinking? Has the man got no self-awareness or humility?

-  Mon Dec 11, 2017 8:34 am #527732
Why does Hodges do this to himself? I'm surprised Dan with his top level contacts didn't know that last week's agreement was mainly written by Commission and Irish civil services.

Pragmatic. Patient. Resilient. Victorious. Yes, I AM talking about Theresa May

There was a moment last week when it looked as if the game was finally up. ‘This is it,’ a leading Tory backbencher told me. ‘I’ve always argued Theresa needs to be given more time, but if she can’t move the negotiations forward then she’s going to have to step aside for someone who can.’

That was on Thursday morning; 24 hours later Theresa May wasn’t stepping aside for anyone. Instead, she was celebrating the single greatest achievement of her tortuous premiership.

Over the coming weeks the ‘December Deal’ to move on to Stage 2 of the Brexit negotiations will be unpicked and traduced. There will be muttering about messy compromises, cans being kicked down roads, and great betrayals. But the Prime Minister said she would find a way to break the Brexit logjam. Her critics said she would fail. She was right, and they were wrong.

Was that after having Hilary Benn on the ropes?

This is so confusing: https://i.dailymail.co.uk/[…]