I just want to have a rant about yesterday's Metro front page headline "Sex, drugs and double murder" which imho was totally inappropriate for the story it was above, which was about a British banker who has been accused of murdering two Asian prostitutes in Hong Kong.
The headline seems way too jaunty for such a grim story - since when do papers pun about murders? It makes it sound like it's not a serious story, just a bit of fun. He's a millionaire so it's like, let's put our faces against the window and have a look in at his glamorous, hedonistic lifestyle. The victims are only foreign, they're only prostitues, who cares if they're dead, as long as it gives us a chance to pun and titillate? If it were the other way round or closer to home (i.e. an Asian murders two Britons), I doubt they'd report it the same way... more like "Immigrant bastard murders our girls!"
A strong and stable forum in the national interest.

Coverage of the murders of these women has been predictably terrible everywhere. The BBC headlined it as "the murder that is captivating Hong Kong" — like a soap opera or a sports tournament. The Mail managed to shift the blame from the alleged culprit to, inevitably, another woman: "Did British banker murder two prostitutes after fiancée CHEATED on him?"

Karen Ingala Smith is very good at highlighting how the media make some victims completely invisible, others semi-responsible for their own deaths, and a 'privileged' few into idealised tragic innocents.

-  Tue Nov 04, 2014 11:01 am #391522
Nothing new I'm afraid. There was a telling moment at the end of the recent dramatisation of the Lord Lucan case where the parents of Sandra Rivett commented that throughout his trial (in absentia) all the attention had been on the lord, his lifestyle, circle of friends and so on; to the point where people had forgotten that their daughter had been killed by him, or vitally, what her name was.
"There ain't nothing you fear more than a bad headline, is there? You'd rather live in shit than let the world see you work a shovel."

-  Wed Nov 05, 2014 4:25 pm #391695
Sound advice from their new agony uncle, who thinks that women should lie back and think of England whenever men want them to, because when it comes to not wanting to give your man sex on tap:


We’ve got to send a message worldwide to girls worldwide that this is just not acceptable.

If only I could think of some appropriate rhyming slang for what I think about this.
"It is the duty of a newspaper to comfort the afflicted and afflict the comfortable."

-  Thu Nov 06, 2014 6:38 pm #391861
I recall Danny Dyer had a similar defence for his agony column in Nuts or Zoo, when he advised a young chap to blacken his partner's eye, if memory serves.
Ní uasal aon uasal ach sinne bheith íseal: Éirímis


Anyway. I was mistaken. Dyer's advice was to a fella who couldn't get over a break up. He suggested cutting the woman so no one else would want her. Naturally this was all jokes that he didn't intend for publication and he's not a misogynist because he loves women dineeee.
Ní uasal aon uasal ach sinne bheith íseal: Éirímis


Anyway. I was mistaken. Dyer's advice was to a fella who couldn't get over a break up. He suggested cutting the woman so no one else would want her. Naturally this was all jokes that he didn't intend for publication and he's not a misogynist because he loves women dineeee.

The story I heard (YMMV) regarding that incident is that Dyer... 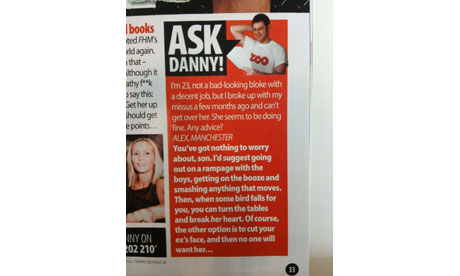 ...only 'lent' his image to Zoo for the advice column, that it wasn't actually him giving the advice and in this case it was a someone on work experience at the magazine who did this "joke". For me the buck ultimately stops at the editor who allowed this to be published.
Currently listening to "French Kiss" (12 inch version) by Lil Louis

To which I can only say. It's a fucking magazine by and for the basest instincts of immature gobshites. Guard your tongue and get copy approyal.

It's only in my head because I shared a house with a less than enlightened chap at the time of publication who found the original article very funny indeed. He was as close to the embodiment of the overgrown teenager borderline sex criminal image you have in your head for someone who'd find that funny. Bought the Sun, Star and Sport every morning, nuts and zoo every week. Terrified or sickened every female friend of mine who meet him. Heard he'd been lifted for beating his wife a while back. That's why this shit bothers me. Men like that need little enough encouragement or reinforcement.
Ní uasal aon uasal ach sinne bheith íseal: Éirímis