-  Sun Aug 28, 2016 2:01 pm #473739
We need to talk about Paul Mason. In recent months it seems Mason has gone from being a respected economics into the new David Icke, promoting ridiculous conspiracy theories like this one


Labour shadow cabinet ministers resigned en masse because they were afraid Jeremy Corbyn would win an election, it was claimed this morning.

Journalist-turned Labour activist Paul Mason said members of Mr Corbyn's top team had co-ordinated the mass walkout because they feared it was their "last chance" to unseat him before a "winnable" general election.

He made the comments on the BBC's Broadcasting House programme this morning, interviewed alongside Rhea Wolfson - a member of Labour's ruling National Executive Committee (NEC).

I imagine that David Icke would love to compare notes on shape-shiftiing lizards with Paul Mason.

Or maybe not.
I once asked Rupert Murdoch why he was so opposed to the European Union. 'That’s easy,' he replied. 'When I go into Downing Street they do what I say; when I go to Brussels they take no notice.'

-  Sun Aug 28, 2016 6:00 pm #473757
I feel reluctant to criticise Mr Mason. It feels like intruding on a man spiralling slowly into madness, and I'm worried interrupting him too much might tip him over the edge.
I could never die, I'm Chuck Norris.
Fuck the Government, and fuck Boris.

-  Sun Aug 28, 2016 9:22 pm #473765
Like all absurd conspiracy theories, it only takes a minute to dismiss the notion that the Parliamentary Labour Party voted overwhelmingly that they had no confidence in Jeremy Corbyn as leader because they were afraid that he was about to win a general election. For one thing, what would they be afraid of? A Labour government, a PLP increased in size, opportunities for jobs in government, a real chance actually to deliver on some of the rhetoric and the shift in policy focus that Corbyn had adumbrated in his leadership thus far (it's pretty universally acknowledged within the party now that acquiescence in austerity is out - perhaps the one real service Corbyn has done the party). An opportunity sooner than expected for Corbyn really to show his chops in government - a real test that would dispel any lingering doubts about his leadership, and build the foundations for a sustained period of Labour government.

Unless, of course, the consensus PLP view was that a government led by Corbyn would logically be exponentially worse than an opposition led by Corbyn, which up to that point, of course, had been demonstrably appalling. They may then have taken the view that an early general election, by some unearthly miracle won by Corbyn, and a subsequent disastrously led Labour government that would be doomed to end early in tragedy and/or farce would cause far worse damage to Labour's prospects of ever again being in a position to deliver actual progressive change in government. On that basis they might have decided that it would be wise publicly to condemn Corbyn's leadership before The Tories could send Cameron's replacement to the palace to ask Brenda for a dissolution.

You need to ask yourself which scenario is the more likely. And the answer you'll get, if you think in any way rationally, is not the latter one.

But, putting all that aside, Mason's little fantasy is entirely predicated on his notion that 18 of the top 20 marginals in England and Wales could have been won by Labour if one to three thousand Green voters had come back to Labour.

Which, as my friend Ravi has shown, is complete bollocks .
"The opportunity to serve our country. That is all we ask." John Smith, Leader of the Labour Party, 10 May 1994.

http://reaction.life/?p=766?ts" onclick="window.open(this.href);return false;
Don't give me the Star Trek crap. it's too early in the morning.

JEREMY Corbyn’s own firebrand celebrity guru wants to oust him because he “doesn’t appeal to the working class”, The Sun can reveal.

Ex-BBC star Paul Mason let slip the devastating verdict on the hapless Labour leader in a conversation with a confidante.

“It’s to do with a cultural thing about London.

“Corbyn goes to England on a bike and cycles round.

“He has no cultural references to the way they live”.

Mason’s plotting will come as a hammer blow to Mr Corbyn.


I've sent Mason my support following his sting by the Sun for his necessary realpolitik and suggested McDonnell's not far behind. 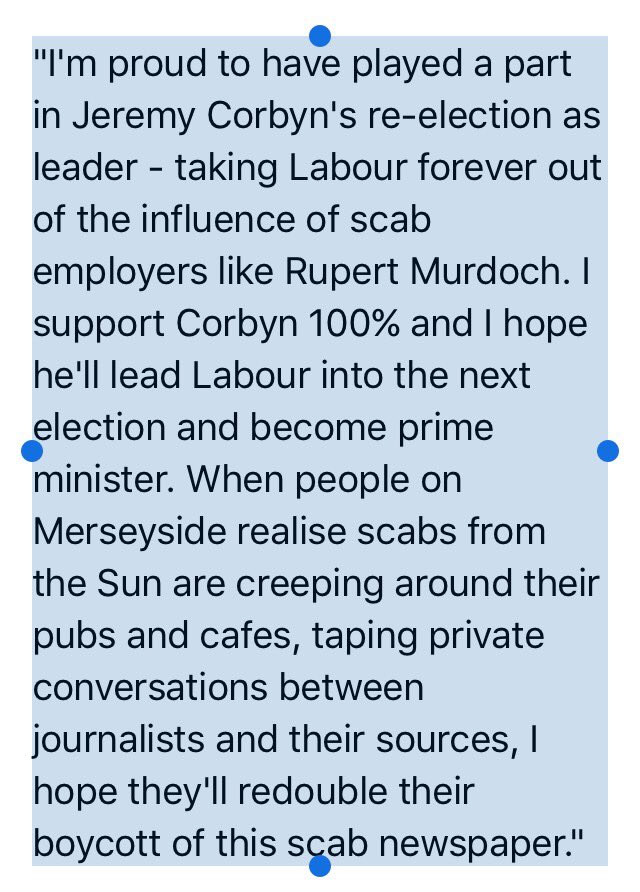 Paul MasonVerified ‏@paulmasonnews
So glad I was there on May 3 1986 when we tried to shut down the scabs at the Sun/NoW - here's what it looked like. Glorious.

Think you're right on McDonnell, which is why I think Starmer being bought into the circle is a telling move.
I could never die, I'm Chuck Norris.
Fuck the Government, and fuck Boris.

John Woodcock ‏@JWoodcockMP 10h10 hours ago
@paulmasonnews we still think you're dead principled calling for us MPs to be deselected for saying in public what you say in private..

bluebellnutter wrote:Mason, for all his bluster, must know, in his heart of hearts, that it's a doomed plan. He's a smart man who knows the circles of journalism and politics well, he must realise that Corbyn is a busted flush.

Think you're right on McDonnell, which is why I think Starmer being bought into the circle is a telling move.

Well he does, he has been caught on tape saying it.

He can say all he likes bringing in the Merseyside boycott (It's more a Liverpool boycott anyhow, Southport is full of Sun readers), but you said it yourself, no one put you up to it, it wasn't a sting as it was someone close by, so considering he decided to tape it means you were probably banging on about this for at least a few minutes.
Last edited by mattomac on Sat Oct 15, 2016 5:04 am, edited 1 time in total.