Leveson II, the Return of Brian

-  Thu Jan 11, 2018 12:04 am #530457
It seems that the Lords have voted in favour of Leveson II (Criminal behaviour by journalists and corrupt relationships with the police) proceeding.

Matt Hancock (me either) has had a Twittersplutter over this:


New Culture Secretary Matt Hancock said it would be an attack on press freedom.

I haven't found any evidence of his receiving the Murdoch shilling, but it looks a distinct possibility.


Wiki wrote:In his role as Minister of State for Energy, he was criticised for hiring a private jet to fly back from a climate conference and accepting money from climate change denial organisation Global Warming Policy Foundation. In October 2014, he apologized after retweeting a poem suggesting that the Labour Party was "full of queers", describing his actions as a "total accident".

The pain broke me, brotherhood relieved me, and from my wounds sprang a river of freedom. (Paul Dorey)
Inscription on the Mémorial de la Paix, Caen.
How soon we forget.

-  Thu Jan 11, 2018 12:24 am #530460
I'd forgotten all about the little skidmark.
The pain broke me, brotherhood relieved me, and from my wounds sprang a river of freedom. (Paul Dorey)
Inscription on the Mémorial de la Paix, Caen.
How soon we forget. 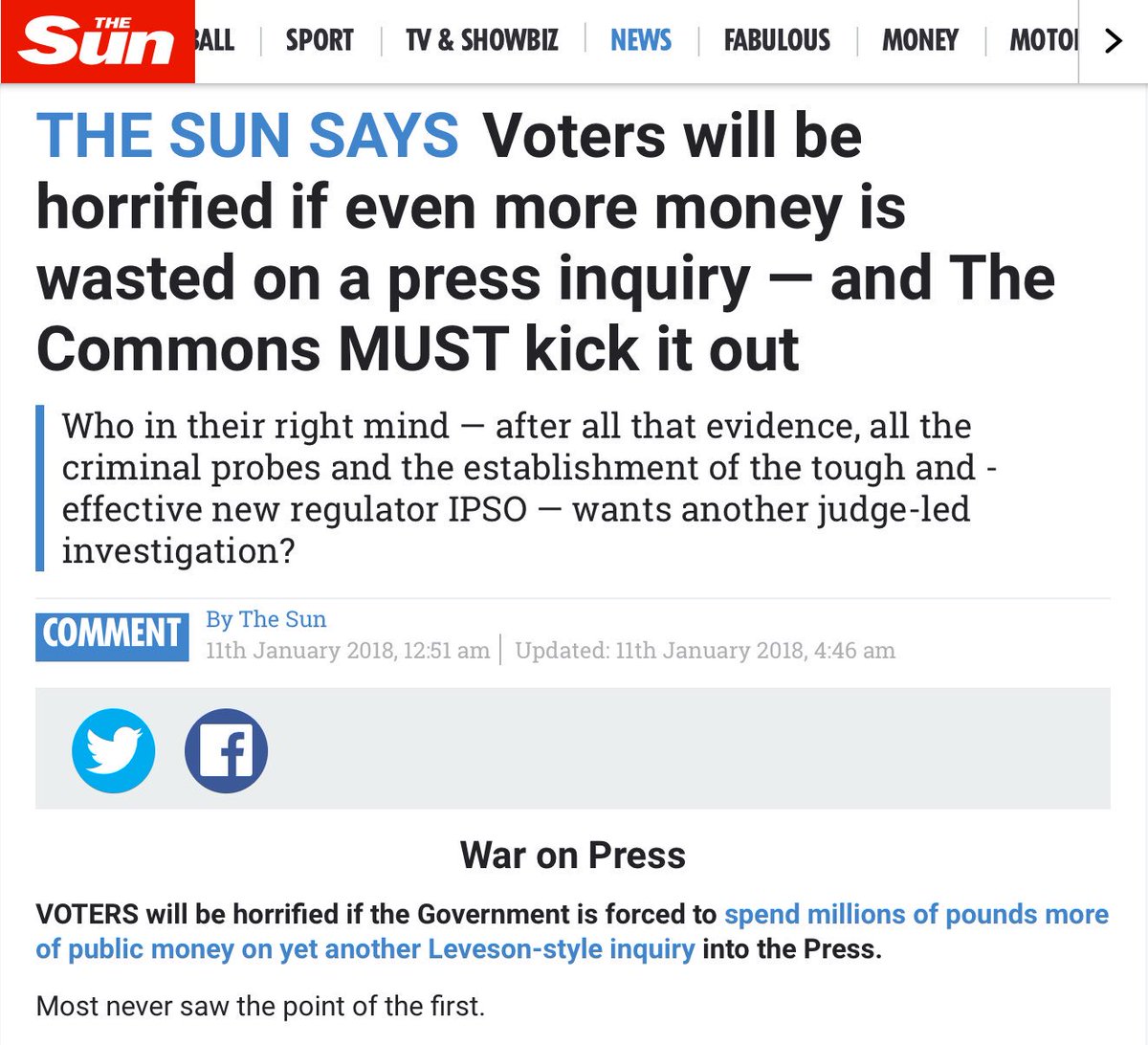 Hiding behind what they want their readers to think.

-  Thu Jan 11, 2018 10:59 am #530499
I seem to remember the papers taking great delight in running all those scandal stories for a 2nd time, that time round taking the opportunity to trash their rivals.
"It is not enough to succeed. Others must fail." - Gore Vidal.

Mr Hancock, who was appointed on Monday, said he would seek to overturn both proposals when the bill - which will bring the EU's general data protection regulation into UK law, reaches the Commons.

Labour's culture spokesman Tom Watson said the Lords votes were "an important step towards justice" for victims of phone hacking.

The brother of a murdered private detective has urged the prime minister to continue with the second part of the Leveson Inquiry into press ethics.

The family of Daniel Morgan, found with an axe in his head in a car park in 1987, believe he was about to expose police corruption when he died.

His brother Alastair Morgan said the statutory Leveson Two inquiry into links between journalists, police and private investigators was essential.

The Met said the case was "complex".

The force said it was working closely with a separate independent panel set up by then-Home Secretary Theresa May in 2013 to review the circumstances of his death.

The murder of Mr Morgan was raised at the original Leveson inquiry into media standards and ethics in 2012 in evidence from former Metropolitan Police detective and BBC Crimewatch presenter Jacqui Hames.

Ms Hames, a victim of phone-hacking, told the inquiry that she and her husband, Det Ch Supt Dave Cook, were placed under surveillance by the News of the World after he appeared on Crimewatch seeking information about Mr Morgan's murder.

Last month Ms Hames applied for a judicial review of the decision by Culture Secretary Karen Bradley to consult on whether to go ahead with part two of the Leveson Inquiry.


Actually a bit closer than I thought it'd be.

9 votes - it looks like the SNP abstained and while some Tories such as Ken Clarke voted with Labour, quite a few Labour MPs voted with the Tories.

Even if you objected to every other part of the Bill, what on earth was the justification for nixing Leveson 2, which was specifically to address police and press criminality?
"The architectural style is early maniac" - Vila Restal


Where was the passion when he really needed it? Really good stuff.

Even if you objected to every other part of the Bill, what on earth was the justification for nixing Leveson 2, which was specifically to address police and press criminality?

Scared of the media attacks on them?

Scared of the media attacks on them?

That doesn't explain the Labour MPs - they'd be attacked regardless. The SNP have always been up Murdoch's arse so I'm not surprised at them.
"The architectural style is early maniac" - Vila Restal

However 9 Unionist MPs voted against, apparently on a promise from the government that they would have a NI-only Leveson. 5 Tories supported Labour and 1 Labour MP (John Grogan) supported the government. Large numbers of abstentions from both sides.

So it was the DUP wot done it apparently.
"The architectural style is early maniac" - Vila Restal

La Moir's article has to be a strong contender f[…]

Yebbut, the fact that he thought they were his sor[…]