But it didn't have Brexit attached to it then, so the gammon didn't care.
"It is the duty of a newspaper to comfort the afflicted and afflict the comfortable."

Right now both Left and Right are more upset that the licence is going up by about 5p a week.
I know I ain't common 'cause I got class I ain't never used yet.

-  Mon Feb 03, 2020 6:06 pm #597311
Andrew Neil waded into the row about 'Horrible Histories' demanding to know if TV license payers money had been wasted making the show. Considering that the show has been sold to many other countries and had a large volume of DVD sales the show has probably brought in more money than it actually cost to make. But Andrew never lets facts get in the way of a self riotous rant.
http://tiny.cc/tqugax

Indeed, move over Shaun Ryder, if there ever was a one-man public order offence, it is him.
Jack believed in the inherent goodness of humanity, and felt a deep social responsibility to protect that. Through us all, Jack marches on.

THE emergency anti-terror law announced yesterday is a start — but the Government must go much further.

Immediately ending automatic release for terrorists, including those already in jail, is right. Public safety must come first. It is utterly appalling that up to now it has not.

But continuing to hand supremely dangerous individuals their chance of freedom after just two-thirds of their sentence only means another few months inside for some.

And we are then meant to trust a parole board, after their ineptitude over cab rapist John Worboys, to judge whether any terrorist is truly deradicalised, as they will all claim.

So we welcome further plans for sentences to be served in full — and jihadists to be freed only after a rigorous review by counter-terror experts to establish if it is safe.

The bleating from the likes of Liberty is tiresomely predictable. So too will be the court challenges by human rights lawyers.

But it is long overdue that the lives of innocent people are prioritised over the rights of murderous fanatics. The Government must fulfil on this pledge. The public will be right behind them.

And if European human rights laws stand in their way, we will have to reconsider our involvement in those too.


More bleating about the nasty bullying EU and seemingly already trying to prepare its readers for a No Deal. Take note of this, because they've flip flopped between supporting No Deal numerous times. They were all for a No Deal, then when it looked like it may actually happen they claimed to be strongly against it. Now it appears they're open to the idea again. For now.


Boris Johnson will negotiate not as a supplicant but an equal partner. If that leads to no trade deal, so be it.

Britain must prepare for the thinnest of deals, or none.

WE know it’s only their opening gambit. Even so, the EU’s demands from newly independent Britain are laughable.

They represent an almost childlike refusal to recognise what happened last Friday at 11pm.

Brussels will not be able to bully Britain into signing over the fishing access we currently enjoy.Nor insist we obey its standards, its rules and its court’s judgments.

We might as well counter-argue that it must stick to OURS and bow before our Supreme Court. Boris Johnson will negotiate not as a supplicant but an equal partner. If that leads to no trade deal, so be it.

Britain must prepare for the thinnest of deals, or none. And the Government is wise to begin parallel negotiations with other countries at once.

Those will aim to reach mutually beneficial agreements, without either side placing impossible restrictions on the other. The EU’s motivation is entirely different — and far more cynical:

Limiting its own Brexit damage while trying to hobble a Britain whose potential now scares Brussels to death. And with good reason, if other firms follow Nissan, reportedly preparing to shift its EU manufacturing to Sunderland.

Voters back a clean break if need be. And there is no aspect of our sovereignty Boris can, or should, give up.

The sooner Michel Barnier and his bosses grasp that, the better. 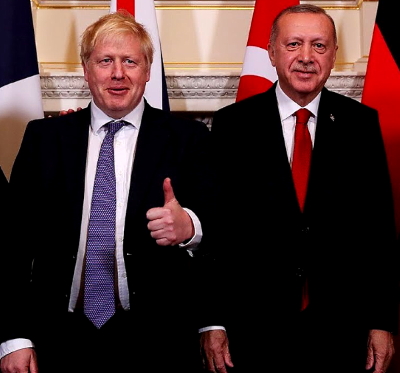 Limiting its own Brexit damage while trying to hobble a Britain whose potential now scares Brussels to death. And with good reason, if other firms follow Nissan, reportedly preparing to shift its EU manufacturing to Sunderland.

The Sun’s now advocating autarky economics 40 years after the left abandoned them due to getting their fingers burned. Even Maduro has given up this ghost.


Boris Johnson will negotiate not as a supplicant but an equal partner.

Brexit has now overtaken Corbynistas for being away with the fairies.

-  Wed Feb 05, 2020 9:19 am #597447
They're really going for the BBC and have been since they realised they're definitely getting their Brexit. It's definitely a conscious target on a tick list of things they want to destroy. I know attacking the BBC is far from new but they've definitely ramped it up.


THE TV licence has less and less public support and the BBC only has itself to blame.

So the new Government consultation over decriminalising non-payment is long overdue.

A compulsory tax made sense in 1946. Punishing non-payers nowadays is absurd.

The Beeb will fight all the way. But consider how it has trashed its once-proud reputation:

The use of £3.7billion a year of public money to crush commercial rivals and relentlessly expand.
The tedious, institutional liberal-left bias in news, drama and “comedy”.
The overpaid executives churning out “woke” bilge, knowing the billions will always keep rolling in.
The betrayal of over-75s.
The waste.
Fundamentally it’s a dinosaur in the Netflix era and irrelevant to many, especially young people raised on YouTube.

The Government must be bold. We need a much slimmer BBC to survive and focus on quality TV and radio.

But the licence has had its day.

BORIS Johnson can only lead the world on climate change with the public on his side and our economy in the front of his mind.

The Government churns out random dates in the not-too-distant future by which it demands we all buy electric cars and replace our gas central heating.

Yes, the UK is hosting a climate summit this year and it must be ambitious.

But do the Tories have a clue about the cost to consumers and the economy? Michael Gove was suspiciously coy.

This country is not governed by Greta Thunberg — nor the Marxist wreckers running Extinction Rebellion.

The Tories must level with the public and ensure that our global warming efforts BOOST the economy instead of wrecking it.

And they will be near-worthless anyway unless the world’s worst polluters, China in particular, follow the example Britain is already setting in slashing emissions.


Even the Mail have criticised Boris today for his attempt at silencing the press. Yet still not a peep from The Sun. What utter fucking cowards. Especially considering the absolute tantrum they throw at the mere mention of Leveson and their precious "PRESS FREEDOM!!!11"

It was interesting listening to Whittingdale on Toady this morning - he at least acknowledges that right now, a subscription model for the BBC is impossible to implement because of the technology in use.
I know I ain't common 'cause I got class I ain't never used yet.

only has itself to blame

AKA the wifebeater's gambit.
The educated differ from the uneducated as much as the living from the dead. Aristotle

-  Thu Feb 06, 2020 1:01 pm #597568
The Sun are feigning concern about the practicalities of rolling out electric cars (they have a point) but I suspect the real reason they're against any sort of environmental initiative is because they would see it as a 'loss'. It's a battle they've been fighting for a long time and it's just about winning it now. Fortunately the tide has turned and I suspect their climate change denial is a battle they will finally lose. And that really pisses them off.

THE wheels are already coming off the Government’s electric car revolution.

The lack of joined-up thinking is depressing.

Only 1.6 per cent of new motors sold in the UK are electric. Which is not surprising when they are at least £10,000 more than the petrol equivalent and most have woeful mileage ranges.

Yet the Government, desperate to advertise its green credentials, blithely announces a ban on new petrol, diesel and even hybrid cars in just 15 years.

How does it intend to totally re-equip Britain for roadside charging — or fund it while its multi-billion pound fuel duty income withers away to nothing?

How will people afford these cars unless prices plummet, which experts say is unlikely in the foreseeable future? And why is the Government poised to axe the subsidies that help us to buy?

We don’t in principle think taxpayers should fund anyone’s new motor. But why remove buyers’ sole financial incentive now, when the industry badly needs a jump-start?

The Government is hopping on a bandwagon without considering the consequences, like Labour 20 years ago when it urged everyone to buy diesels.

Meanwhile councils are already brainlessly instigating city centre bans or fines on all but the tiny number of zero-emission vehicles currently on the road.

Who can blame motorists for being confused and angry? Many will happily drive more eco-friendly cars once they are viable and affordable.

But this is all stick and no carrot.

BRITAIN should not be proudly flying our flag for Prince Andrew’s birthday. It is a grotesque gesture in the circumstances.

But he has still been sacked from Royal duties and accused of ignoring FBI demands to question him.

Epstein’s victims are adamant Andrew must return to the US.

What an insult to them if Town Halls raise the Union Jack to honour him instead.

-  Thu Feb 06, 2020 4:30 pm #597586
And who circulated the memo demanding that town halls fly the flags?
Tell us that The Sun.
The educated differ from the uneducated as much as the living from the dead. Aristotle

Out of ICU. Now what? Beatification, probably[…]

Trump, in one of his infinite array of saying utte[…]

Ever had a black pudding Scotch egg? I love i[…]