Just a bout of flu.
Jack believed in the inherent goodness of humanity, and felt a deep social responsibility to protect that. Through us all, Jack marches on.

This could be Gove's moment.
When the country's short of things to wipe their arses on.
The educated differ from the uneducated as much as the living from the dead. Aristotle 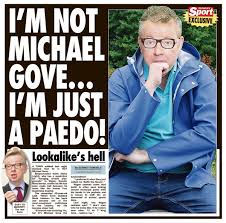 Carry on, chaps.
Sig in quarantine

High praise indeed. That lightweight chancer is the reason Johnson's in charge.

Oh, and having the absolute fucking audacity to tell us all to support the NHS after spending years slagging it off and trying to get it privatised.

CURBS on our freedom, unprecedented in peacetime, are vital now that coronavirus is spreading rapidly. It is also crucial Britain unites behind them and respects them.

Boris Johnson has taken flak for not imposing such measures already. His critics should now back off.

All along he has followed the best advice of our foremost experts on ­epidemics. They said that would evolve as the situation worsened — and yesterday it was toughened dramatically.

National unity is key. We must take to heart the self-isolation and lockdowns — both for those already with symptoms and those without. Likewise the “advice” not to go to pubs, restaurants or cinemas.

Our lives will be very different for months. Britain will barely resemble the country we love. But we can all play our part in seeing off this catastrophe, minimising the disease’s spread and giving the NHS every chance to save lives.

The Sun will raise just one doubt:

It still seems inconsistent that families must avoid non-essential social contact, but continue packing the children off to school. We know the NHS would be hit hard if health workers stayed home to look after their kids. But a school skeleton staff could surely supervise them.

Only the wartime generation has experienced a crisis this grave. We have to put our faith politically in the newly elected government tasked with facing it down — and the experts around them.

Even more importantly we must trust our health service and back its magnificent and selfless staff. You can do that today by emailing iloveNHS@the-sun.co.uk or by using the form below. We’ll print your messages.

The NHS will need every ounce of support the nation can give, even if it just means dutifully staying put in our homes.


The Sun took a similar approach as Trump when this all started. Very much the "keep calm and carry on" attitude and practically sneering at "draconian measures" other countries took. Now they're desperately trying to pretend they've taken it seriously all along.

CURBS on our freedom, unprecedented in peacetime

Look forward to the Sun's solidarity on freedom curbs when the ECHR is abolished and its indefinite detention without trial for 'terror suspects'.

Meanwhile, "a school skeleton staff"? Are they fucking kidding? You try telling a thousand angry, bored, upset teenagers that they have to stay put with just a few lunchtime supervisors to keep them on the grounds.
"It is not enough to succeed. Others must fail." - Gore Vidal.

Which is like comparing Shakespeare's Henry V to Mrs Brown's Boys.
Boiler, Watchman, Kreuzberger liked this
"He's the leader of the gang. He's the top, he's the tip, he's the championship. He's Top Cat. And he's scum!"
Others?

-  Tue Mar 17, 2020 8:24 pm #601082
"Magnificent and selfless". A month ago they were cosseted public sector workers with cushy jobs for life and gold-plated pensions.
The Red Arrow, Cyclist, Safe_Timber_Man liked this
We've got democracy! Who needs solidarity?

davidjay wrote: ↑
Tue Mar 17, 2020 8:24 pm
"Magnificent and selfless". A month ago they were cosseted public sector workers with cushy jobs for life and gold-plated pensions.

Funny how that happens when the shit gets real...

It's Tommy this and Tommy that and Tommy fall be'ind.
But it's "Please to walk in front sir" when there's trouble in the wind.
Samanfur, The Red Arrow, Malcolm Armsteen and 1 others liked this
The educated differ from the uneducated as much as the living from the dead. Aristotle

Looks like in their desperation to protect Boris they're now going to turn on Sunak.

UNTIL now Chancellor Rishi Sunak hasn’t put a foot wrong. But his delay over bailing out Britain’s workers with hard cash is ­terrifying millions of people.

Some have already lost their jobs. Others must now give theirs up to look after their kids, with schools closing.

It may be hard for politicians to grasp, but many ordinary people have no savings to tide them over.

They are broke NOW. They need to feed themselves and their families NOW.

Not at the weekend. Not next week.

Even those not yet made redundant by this global economic collapse are petrified about how bad this could get.

The pub industry alone says hundreds of thousands of jobs will be lost imminently without immediate help.

Other governments have stepped in. Why has ours been so slow?

Devising a new system to get tens of billions in lost wages into the right hands is complex. We get that.

We also think the “universal income” idea is an ill-considered and permanently ruinous fix.

But promises, and a temporary ban on evicting renters, won’t quell the fear.

This virus is not the fault of the workers, nor the Government whose draconian restrictions are sound.

But with the economy in total meltdown, only the Government now can get Britain paid.

Do it today, Rishi.

The Sun originally backed Boris' decision NOT to close schools. Another U-turn.


CLOSING schools was grimly inevitable but right. It always seemed odd to keep them open while telling everyone to stay home.

CLOSING schools was grimly inevitable but right. It always seemed odd to keep them open while telling everyone to stay home.

The Government must fulfil its pledge to ensure kids on free school meals are fully funded to get fed.

We pay tribute to the NHS staff, delivery drivers and social carers whose often low-paid work is so essential that their children WILL still be looked after in school.

And our hearts go out to the teenagers whose GCSEs and A-levels will be postponed indefinitely.

This is an unprecedented nightmare, blighting their childhoods.

We can only help each other endure it.

IMAGINE the evil of using a deadly ­pandemic to spread fake news furthering your political or commercial agenda.

It should no longer shock us after the Salisbury poisonings.

But Kremlin trolls are sowing panic online to undermine the West’s Covid-19 strategies.

Let’s remember that, next time our leaders have to make nice with Putin at the G20.

Where do they do this with near impunity? That’s right . . .

On Facebook, which talks such a good game about policing its site — but is always found wanting.

IMAGINE the evil of using a deadly ­pandemic to spread fake news furthering your political or commercial agenda.

Murdoch. If you want to see the evil of spreading fake news to further a political or commercial agenda, take a look in the fucking mirror, you cunt.
Safe_Timber_Man liked this
Narwhal narwhal swimming in the ocean
Causing a commotion
Because they are so awesome

Someone obviously couldn't get tinfoil from the su[…]

You'd have thought with his brain pills he'd have […]

Zero. Poland would veto it.