by bluebellnutter
She was famously responsible for "turning around the British Rail sandwich" at one point. Although clearly not to any great success.

by The Red Arrow
Nothing to see here, move along...

by Bones McCoy
Dover's in Kent - did Farage have a booking with his side-chick?

by mr angry manchester
My MP was on it last night, Esther bloody McVey, being an arse as usual, I hate the fascist witch. However another issue is why do they keep having the I don't want to pay Tax Alliance on so often? They seem to have the collective intelligence of a bag of cement., although that Chloe was pretty fit.

Seems to be a strategy, get someone quite attractive on, then they can be googled afterwards, so the masses find someone new to crack one off to.

Seriously, I am starting to think that political questioning, in its televisual form, is a waste of time as no direct questions are ever answered honestly. I would like to see a programme where every time the interviewee goes off at a tangent to evade the issue, a bloody great klaxon goes off and the interview is terminated, to deny waffling bastards the oxygen of publicity.

by The Red Arrow
Christ on a bike! God luck with that lot, Leanne, better bring extra pineapple rings for all that gammon. 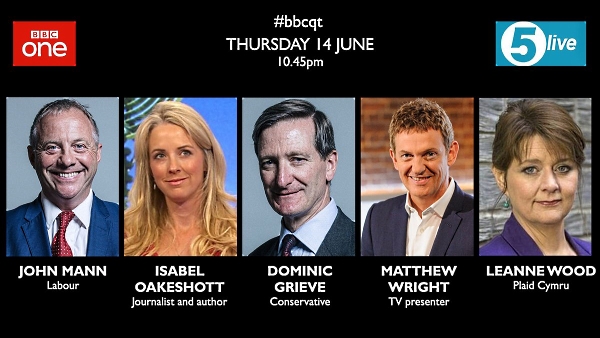 by MisterMuncher
It's a lineup that proves beyond doubt that some mothers would drown nothin'.

by Daley Mayle
Do you know what? I might change a habit of many years and actually watch QT tonight.

Today was the last day of Matthew Wright presenting the Wright Stuff and since he made the decision to leave he's been getting increasingly demob happy. I have issues with his show but he is no fool and it will be interesting to see him in action without the weight of Ofcom's compliance towards impartiality. He said he has left with no plans for the future but maybe he'll use his appearance for buffing up his CV. He had a pop at Oakeshott earlier this week and is anti-Brexit.

Daley Mayle wrote: ↑
Thu Jun 14, 2018 11:59 am
Today was the last day of Matthew Wright presenting the Wright Stuff and since he made the decision to leave he's been getting increasingly demob happy.

To be replaced by Jeremy Vine, I understand.

by Samanfur
Audience member on Dominic Grieve getting patronised by Oakeshott:

Nobody's mentioned anything to do with Oakeshott sitting on Banks' e-mails.

There is no way that the BBC would have let see any real combat - they simply have too much common cause with her. Remember Marr letting her accuse Cadwalladr of fabrication and the two of them chortling as the latter left the studio in tears?

That is how embedded she is with this overwhelmingly tory clique.

Nobody's mentioned anything to do with Oakeshott sitting on Banks' e-mails.

I have a feeling that there must have been a pre-recording agreement on what was to be discussed. ByLine Media had threatened the BBC and Oakeshott with legal action if Oakeshott repeated her allegation that ByLine had hacked her computer, maybe there was a quid pro quo agreement that no one mentions her sitting on the Banks emails.

by Kreuzberger
That's a very good point and a real possibility. but the BBC press office was last night suggesting that anything was fair game and that is why she was on the show.

Conceivably too, the right hand had no idea what the left hand was doing.

David Dimbleby is to leave Question Time after 25 years on the BBC's flagship political programme.

The presenter, who will leave the show at the end of the year, said it was "the right moment to leave".

The 79-year-old, who has chaired the show since 1994, insisted he was "not giving up broadcasting" but planned "to return to my first love: reporting".

Newsnight presenter Kirsty Wark recently revealed she would be interested in taking over the role and would "throw her hat in the ring" when Dimbleby stepped down.