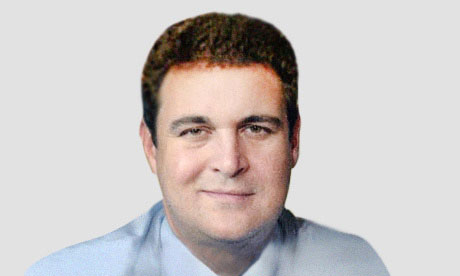 Needs an Alamy tag on it, and a heck of a lot of photoshopping to look less creepy. Are his eyes actually swivelling? I swear I haven't doctored it, just c&p'd right off the Guardian site

Mod 1: I was drawn to Mailwatch because the standard of debate and writing was so much better than other message boards.
Mod 2: f*ck off you f*cking c*nt!

-  Wed May 09, 2012 1:34 pm #224336
Leveson asks him about the website working for both UK and US markets - does he comply with UK or US law? American content in accordance wit US law, British ditto. Leveson - "presumably then you have to work to the 'highest' standards?"
Clarky prevaricates.
Eventual answer sounds like they do whatever they think they can get away with.
Do what you can, with what you have, where you are.

He had the temerity to tell him that his enquiry is only about enforcing existing law, and not changing press standards.

Brian: "you'll start an argument with me that I'm not sure you want to do"

He then said the Mail (print) was ethical.

Now being asked about corrections.
Says that sometimes articles just corrected because of 'errors of fact' often the information coming from commenters... or from the subjects of stories "so quite often we correct the content". "Or sometimes we just take the story down". Brian calls him on the persistence and repeatability of internet stories. Clarke thinks that if the story is taken down it 'vanishes'.

There have been 'a couple' of PCC adjudications against him, and the make corrections 'prominently'. Should corrections be noted? Oh, no, that would be impractical. It's an evolving, organic animal of a product...

"I can't think that we have" ever published an apology except as a result of PCC adjudications.
Do what you can, with what you have, where you are.

Tries to say there isn't time to answer. Brian assures him they will make the time...
Do what you can, with what you have, where you are.

-  Wed May 09, 2012 1:58 pm #224346
Didn't he also try and claim that 99% of people only want stories correcting rather than an apology? I wonder if he has any evidence to back up such a claim? If a story is simply corrected a few days after it has been published there is very little chance that the people who read the original story will be aware that the story has been corrected.
http://tiny.cc/tqugax

-  Wed May 09, 2012 2:01 pm #224347
I think that's one of the reasons Brian is so pissed off with him. He's clearly bullshitting and making stuff up, but in such a way as it's impossible to simply call him on it. A few hours research and you could do him up like a kipper, but not in court. It's a similar technique to the one Dacre used, and he ended up being recalled and questioned again.

Why is there no celebrity covering their assets/modesty standing just to the right of Martin Clarke?
Do what you can, with what you have, where you are.

Or maybe he is just absolutely convinced that he knows all the answers and no-one else does. He is clearly a legend in his own Timeline.
Do what you can, with what you have, where you are.

AAARRHHRGHGHG a newspaper/website is not a private individual. Journalists need to work this out.

I'm reading this as Clarke admitting that Mail Online is shit.

Guess what? He wasn't in the office that day.

Do editors actually ever fuckin' show up to work? I can't remember Perry White or J Jonah Jameson taking the day off when big stories were about to break...
Do what you can, with what you have, where you are.

AAARRHHRGHGHG a newspaper/website is not a private individual. Journalists need to work this out.

QC asks him about Towie story today (I'll link in a minute) not clear if they were taken by consent - does Clarke know? He says it was 'self-evident' they were. He didn't actually check. He says he didn't need to...
But she's a big star so she must have consented.

Is there a system for checking pictures taken by consent?
No. He relies on the paps to follow the rules...

What a barrel of shite he has just lifted the lid on. People on Twitter are saying that his P45 will be waiting for him when he gets back to the office. I don't think so, I think he's doing precisely what he's paid (handsomely) to do.

He is now saying that it is the celebs' favourite website. Nexus of PR, photo agencies and websites. Admission of what we all know, the showbiz content is just bollocks.

"You've been very indulgent" he says to Brian.
"Not sure about that" he replies.

The Report, of course, is yet to be written, and Dacre has submitted a THIRD witness statement. Dunno what that's all about.
Do what you can, with what you have, where you are.

An article for certain people to ponder. https://[…]

I long ago came to the conclusion that many peop[…]